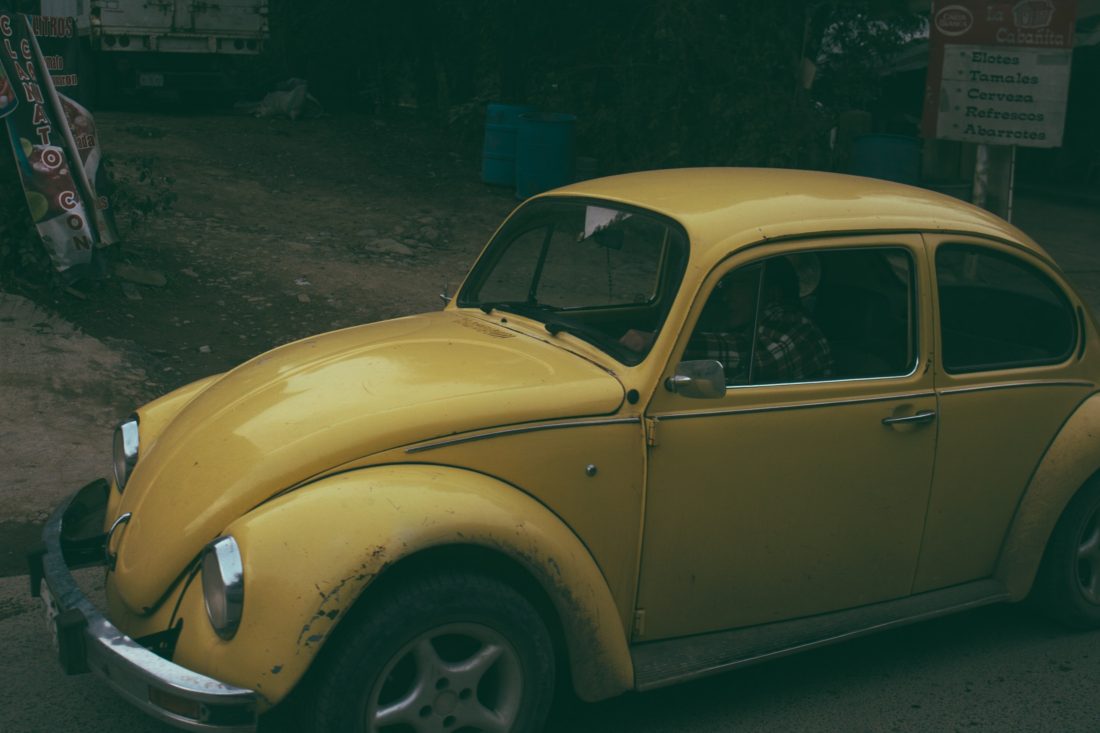 her long straight dark hair parted in the middle. She would have been Midwestern helpful if he needed her to carry his surfboard, or a box of tools, to his VW bug. She had that same car, she and her husband, though later they’d upgrade to a Vanagon and camp all summer long with Flat Stanley and their two little girls. She’d have said to Ted Bundy oh your poor arm, let me help, are you sure that doesn’t need a proper cast? And then her daughters left only with their English professor father who’d never heard of a lint trap, who could spend all afternoon in the kitchen following a recipe for saffron rice but couldn’t warm up a hot dog. The girls might have attended more theater with just their dad, but who would have sewn their chorale dresses, whose feelings would they have hurt when they were awful. Who would have French braided their hair that looked nothing like their mom’s, wild blonde and made blonder by summer spray bottles of lemon juice and hydrogen peroxide, side-parted because times change. Ted Bundy’s favorite look became dated, but there is always another man with another preference who is danger. Even after their mom’s murder, Flat Stanley’s sisters are not discouraged from carrying a box for a wounded stranger, even when a size 14 blonde woman who looks much more like those girls lifts the end of a couch into a stranger’s van. After they see that movie, the song American Girl makes them queasy, but the dad’s record collection is Carpenters plus Zeppelin plus the Oliver soundtrack: the girls standing on the footstool with a hairbrush microphone singing As Long as He Needs Me, rehearsing for when they are grown up and can hold out their arms in service.

for lunch and cleans his toilet and pulls into gas stations and spends time in the mundane just like you do, but he also stumbled on a beaver dam on his walk in the woods and watched a sailboat corner the Black Rocks out on Lake Superior and a tiny neon blue bug landed on his paper finger while he was on the porch. When he is surrounded by concrete and plastic and car horns, Flat Stanley can perhaps imagine why people murder other people but there are always maple trees transforming themselves yellow, and goofy fish, and snowflakes! So many serial killers practiced in beautiful parts of the country: the icy forests of Alaska, and in Florida, so full of sunshine and alligators. Even a sky shifting at dusk over the ugliest parking lot becomes glory, inspires Flat Stanley to text a person he loves them. He will soon hop onto a plane heading toward that person, in Spokane, where Robert Lee Yates shot at least 13 women in the head and buried them in woods so pretty the women would have surely written poems if left alive and given notebooks.

in Nottingham. First stop is the mock trial of Joan Phillips, highwaywoman. Visitors sit in the jury box, some are called up to play the judge, or witness. The actor playing the bailiff notes that this courtroom was the filming location of Rumpole of the Bailey, a show Flat Stanley only knows because his dad, recently dead, once gave him the DVD of the show for Christmas, even though the dad himself had converted to Judaism for a spell. At the time, Flat Stanley asked his dad about the present: was this a show he used to watch when he lived in England, was it a show they used to watch together when Flat Stanley was younger, flatter. Why this DVD? No. It was just a DVD, just a present. Merry Christmas. So Flat Stanley never got around to watching it and then he went all streaming, like you and everybody, and who knows where the DVDs and the DVD player or his dad even are now. Long gone. Still, this moment – ending up in this museum courtroom only weeks after his dad, so sick for so long, finally got away from his body – this feels like something. If not love, if not fate, then at least coincidence. A good enough connection to feel like this grief everybody talks about.

The actress portraying Joan Phillips suggests the historical Joan Phillips had fun teaming up with her husband to rob, to ruse. Flat Stanley votes NOT GUILTY when the bailiff turns to the jury, mostly because all the evidence sounds like hearsay to him. Hearsay. What a word: so on the nose. Heard-and-said, though who knows if the British even consider hearsay admissible. Later, he tours the jail proper, taking selfies with the mug shots of inmates, their reports from the doctors and jailers. Most of the jailed were predicted to improve with some time at sea; most of the convicted who were released into naval service died at sea. Flat Stanley can only feel heavy, like he’s been magneted to a refrigerator for too many weeks before being mailed home to his third-grader. While he pokes into and out of cells dug into the earth, tiny caves, he hears the next performance outside: Joan Phillips’s public execution. He trusts the museum isn’t glorifying her hanging; he knows there is a lesson for the audience about punishment and power, about the gross thrill of another person’s mistakes. Still, it is hard to wait for them to get there.

Two weeks ago, at his father’s funeral, Flat Stanley found himself surrounded by people who also loved his dad. People who were crying, near to faint with grief like his, probably worse, but he could not fall into their arms, even if they been opened to him. His mom—divorced from her dad 25 years now, is not here, but if Flat Stanley could choose, he’d be watching Perry Mason with her instead, a show they did watch together, which he doesn’t want on DVD but which, as a gift, would make more sense. The priest is stumbling over the reading and Flat Stanley cannot say, or feel, one true thing around these people who lived with his dad, who ate with him, who saw him asleep and sad, who were not actors in his life. Real people Flat Stanley had given stupid presents at holidays: enjoy this flavored oil, you, this angel ornament, this plant. Take somebody else to dinner on me. He’s not alone in thinking what he’s thinking, every single one of them is: How—what a world—did I get here, grieving with this lot of weirdly devoted nobodies.