The Bass Player in a Metal Band 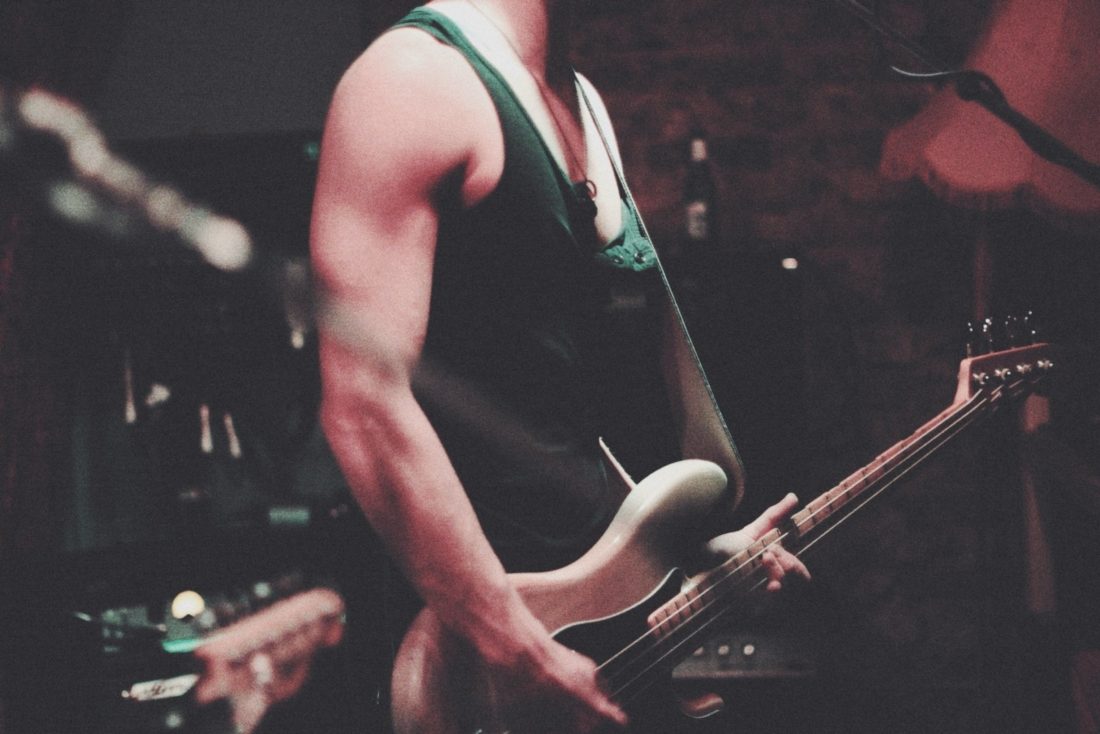 My sister Ruth let her boyfriend move into our trailer in March. Ruth was seventeen, and Joel, I don’t know how old Joel was. Older than Ruth, for sure. He had something about him that was eternally youthful and mischievous, so sometimes I thought maybe he was a teen as well, just grizzled. On certain nights I was sure he was nearing forty. After a couple weeks I learned that on other certain nights, I’d be best served to go for a bike ride when Joel was around.

Mom moved out by May.

I liked Joel at first. For a thirteen-year-old who only knew his dad from stories and police reports, having a cool guy around the place was a welcomed change. He seemed to have an allergy to wearing shirts indoors, so I always got a look at his tall, wiry frame. He was good looking, kind of like a deep undercover cop or something. He had tattoos, even. I made out a scratchy Pitbull on his forearm and rose with the name Jeanie written underneath on the other. I decided I’d do what I could to look like Joel one day, even if it was just tattoos.

“Big Dude,” he always said to me. The nick name made me feel cool, though I did assume he used it because he couldn’t be bothered to remember my name. He tossed a cassette at me and said, “Check this shit.”

If Joel thought it was cool then it was cool, so I borrowed Ruth’s Walkman and sat out on the front steps underneath the awning. I pressed the clunky play button. Some feedback and then a screeching guitar and then a big wave of distorted noise. I thought the tape was broken so I popped it out and shook it. The label read DED HUKER. I put the DED HUKER tape back in and it was the same scary, nearly unintelligible metal. I listened to the whole thing because if Joel said it was cool, then maybe I just missing something. I listened to it twice.

“Pretty bad ass, right Big Dude?” He asked later. He was stretched out on our couch and watching MTV.

Turned out Joel played bass for DED HUKER. I wasn’t going to tell him, but I did not think it was bad ass. I had already started absorbing whatever Ruth and her friends were listening to. We liked Gin Blossoms, not DED HUKER.

“What are you drawing?” He asked Ruth, curled under his arm.

Ruth showed him her sketch pad.

“Some kind of comic book shit?” He scoffed. “Lame.”

Ruth got up and stormed down the narrow hallway to the back bedroom. My mom used to sleep back there and Ruth and I shared the smaller room. Now Joel and Ruth were in the master and mom slept out on the couch after she got off work. I went to my lonely room and could hear everything, because you can hear everything in a trailer. I heard them bicker for a few minutes and then I heard some giggles and noises. I wasn’t exactly sure what they were but I could guess. I crawled underneath my bed and burrowed my head into my sleeping bag. Didn’t really help.

Ruth stopped drawing. Joel said it was a waste of time, that she should get a job if they were to ever move out to the city. He’d say, don’t you want that, baby? And then Ruth would push her dyed-black hair behind her ear and blush. She got a job at Harmony Diner and Joel sat at the counter and watched her for her entire shift.

I liked Ruth’s comics. I got to read them all. I loved it; my own free comic collection. Ruth and her friends had plans to start their own comic book publisher someday. One afternoon in June, I watched Ruth stomp to the trash can under the carport. She threw away a crumpled mess of sketches, all her work. Some of it was torn up too, and she tore up whatever was still intact. She went and cried.

I took my own sketchbook out of my room. I put it in my backpack and rode my bike over to the creek just across the rail road tracks. I tossed the sketchbook full of attempts at my own super heroes into the little stream and watched it soak up the brown water and turn into a soggy mess. I also decided maybe I didn’t like Joel anymore. I still had the DED HUKER cassette in my bag. I dropped it on the gravel and stomped it. The ribbon guts unspooled like the smallest intestines. I ran over it with my bike tire for good measure.

Mom had moved into Jeff’s place on the other side of the trailer court. Jeff said I was welcome, but someone had to stick around and keep an eye on Ruth. I pedaled back to our place, ready to give Joel what for. I was going to tell him to get out and leave my sister alone. We had a happy home before you showed up.

Ruth was crying again or maybe just still crying. She sat at the countertop in the kitchenette and sobbed. She told me what was wrong. Joel… DED HUKER… tour… gone forever… never love again. I pieced it together eventually.

Ruth stopped crying after a while. I pedaled up to the Dollar Tree and bought a couple of new notebooks. They weren’t the nice sketchbooks or anything, but they’d do. Ruth showed me how to get a good shadow behind your character while we waited around for another Joel to show up.