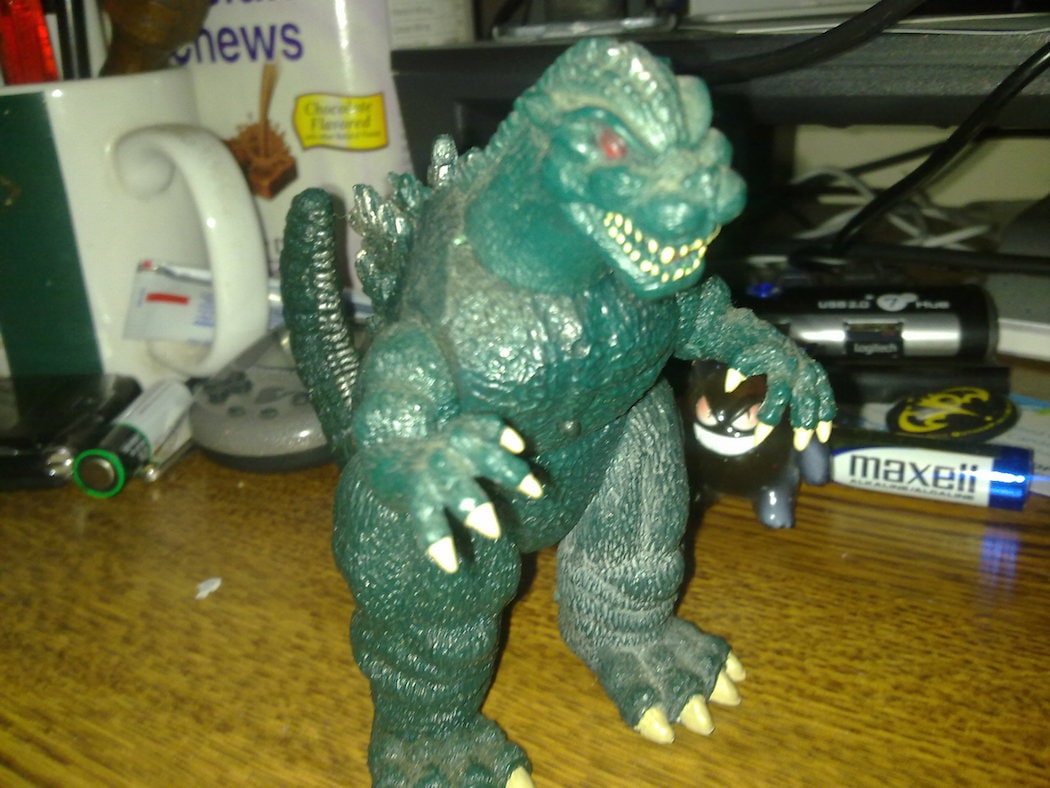 Godzilla, lord of kaiju, monster of my dreams. My friend, my fiend. God-zill-a: the curve of the tongue announcing deity, then turbulence and a tap on the teeth, ending with an atomic grunt from the gut. God. Zill. A.
You are G, Big G, in the graphic novels, towering stippled and cross-hatched over Tokyo. You are Gojira in Japan. You were Gigantis the Fire Monster during a gangly follow-up. But in my heart you are always Godzilla[i].

I had darted ahead of my parents into the video store, when beyond the black double entry doors there bloomed a field of images—“these are all videos we can rent,” sang out my mother, and then, without even a foreboding rumble, a surge of hissing lava filled the fumarole[ii] of my chest, and, from a shelf of strand board and chipped two-by-fours, sitting level with a five-year-old’s eyes, there was a paper box illustrated with the stuff of imaginations the world over.
A towering theropod locked in combat against both a mechanical doppelganger and a serpentine beast,[iii] the battle raging on all sides with eye lasers, missile fingers, and hurricane-spawning tails. The gun-toting musclemen[iv], the ghouls and the freaks of other aisles—none compared. And as if I were some weary Grecian chiseler of stone graced with the Muse’s first visit (tired, gray with marble spall, found by the touch of Olympian inspiration), I recognized my fantasy of clashing prehistoric beasts. With reverence and joy (the aura of deity, the statue complete, the hammer fallen to the floor) I realized that explosions and rocketry would complement saurian melees; and that those plastic casts of long-extinct titans I wrangled could just as easily meet robotic foes—Mesozoic muscle versus unblinking automatons. The trajectory of my short, flat existence on this mortal plane was wrenched upwards.
My prose lacks the skill to express with adequate force that flash, that rush, that impact of unequivocal need. In the course of a fluorescent-tinged moment walking down the aisle (flanked by Action on one side, Drama on the other) as if I had trained a reticule on this movie cover, I reached out to feel through the pads of my fingers the video’s realness (“Terror of Mechagodzilla”[v] it read in thunderous green type) that set a spark to the tinder of one boy’s mind.

In my tiny hands I held the cassette by either end. I peered through the waxy case and past the window into the gears and flaps as if there I could discern frames from the wound ribbon[vi]. Hurry up, dad, hurry up…Once home my father unsheathed and slid the video into our whirring machine, which slurped the proffered meal with a clang and a clunk that echoed equally of plastic and metal; an aura overcame our RCA[vii]. The world around me receded, save for a glowing warning from the FBI. Our light-hearted family outing had transformed into a fateful enterprise[viii], a mission. With legalities established and a long black pause that heralded our protagonist’s arrival, I writhed in my place on the sofa. Godzilla was preparing to play. The abyss gave way to a crack of fire; I sat awed and entranced; I watched the explosion, blooming, smoking, beyond what my eyes had before seen, massive but rippling as a match flame, and then Godzilla appeared, and the beast roared as he plunged into a city swallowed by conflagration. It had begun. My monster had arrived. The heart of this film (this franchise) had been introduced. The hypoid gears[ix] of plot had been hastened to full speed. No other introduction would ever compare. I was no longer Brandon the Birdbrain, the fidgety boy who would discard interests as they were acquired. I was blinded to the mundaneness of reality, deaf to proffered conversation. In my subconscious seclusion I was a citizen of a beleaguered civilization, humbled, in the throes of witnessing a rampant reckoning. Enthralled with these brief frames of saurian visage (a predator’s maw and maple-gnarled hide[x]) I had no expectation of the doppelganger that appeared—stiffer, arms locked, straight-gazed—and collided with the protagonist while smokestacks collapsed and the ground cratered. They locked as grapplers would and—look, look—I thought—look at where its skin has peeled away; for there was, unmistakably, a patch of riveted steel on one’s massive reptilian arm which puzzled the first beast—and because such a cyborg hint could not be left alone, there was no option but for our true hero to let loose with a blast of atomizing breath—a hellish torrent as if produced by a fusion-powered flamethrower—a blue swath of atomic devastation—and: the doppelganger stood still and a creeping glow rose upward, and it dissolved the skin, and metal was made visible, and I could not believe that in ten short seconds, dear reader, such a spectacle was made mine, while the title card that briefly stalled the hissing shriek of a million steel-mawed mice that foretold the highest plane of fantasy made real that boy or girl could hope to experience.
After the film (our viewing interrupted only by a red-hued submarine scene that had me panicked and my father uselessly adjusting the tracking tab through a spectrum of static) we stood—my parents no doubt relieved—and gathered for a dinner that could have been postponed indefinitely for all I cared. The video was laid upon the VCR,[xi] still, utilitarian, not hinting at an internal presence so different from other decor, and as I ate (a meal as solidly erased from memory as any thought formed in utero), the film intruded on every thought with persistence worthy of a titan. A young boy, yet I had found a fixture for life!

When I started, months ago, to write “Godzilla,” first in my home office, and then in a living room where I’ve viewed many a Toho film, I thought I would present this essay as a humorous trifle, a laugh for the unknown reader, of course, but also for its author. As my thoughts developed, however, I realized that this piece’s completion would roughly coincide with the release of a new Godzilla. [xii] What had been a jaunt across the empty wax tablet became purposeful.
For reasons as obvious as Emmerich’s disastrous 1998 iteration—known by fans as GINO, or “Godzilla In Name Only,” I am wary of Hollywood’s second attempt at the franchise; [xiii] this apprehension, most assuredly, is shared by enthusiasts everywhere. Had I not seen the prior work of helmer Gareth Edwards, I may have skipped this as I would any other lackluster remake that’s arrived stillborn at the cinemas: a eunuch Robocop, an amnesiac Total Recall,[xiv] a Star Trek that boldly gave Khan a dose of Bethanian blood[xv]. But with Monsters[xvi] fresh in mind months after viewing, I have hope. Because I write this before the May release, I can say only one thing with certainty: I’ll be in the theater, Twizzlers in hand, [xvii] on opening weekend.
The consensus of fandom will be set when the reader begins this text. But here in the nexus of space known as “pre-release,” this matter cycles through forum and fanzine, and I stay engaged with every development. Godzilla, stay true to Gojira. Do not debase yourself as a mutant iguana. Do not devolve into professional wrestling theatrics. I hope Edwards will honor Mr. Honda’s[xviii] vision. Our community, we will love you always, but should this director disrespect you we will be legion, an electronic fury, piling our rage into Tweets and Facebook comments, with wrath not even imagined by Emmerich. And do not pity that German. We must choose between a hack’s filmography and a film icon’s soul, and one wanted Godzilla to exist as he was when first wading through Tokyo Harbor, and retain the spectacle of atomic horror made animate for an audience that now remembers neither Fat Man nor Little Boy. [xix] You are darkness and death, the clicking of the Geiger counter, keloids, [xx] the coming of apocalypse.[xxi] And this is how you should be portrayed, my Godzilla.

[i] As Patterson notes here, the issue of “Godzilla” as a name for this creature is a rather complex issue. Gojira, a portmanteau of the Japanese words gorira (gorilla) and kujira (whale) itself has a somewhat mythical backstory. It’s likely that when the film Gojira (1954) was edited for release in the United States, the Japanese pronunciation was interpreted as having Anglicized ‘z’ and ‘l’ sounds, with the ‘d’ being added deliberately to impress upon the beast’s immensity. The resulting film was Godzilla, King of the Monsters! “Gigantis” was the name given to a Godzilla creature (a different creature than the one killed in Gojira) appearing in the American release of Godzilla’s Counterattack, the second Godzilla film, renamed Gigantis the Fire Monster in the US.

[ii] Patterson’s “Godzilla” was written after the author toured several volcanic parks of the Pacific Northwest. It may be that the “fumarole” metaphor here was inspired by fumaroles he witnessed on the trip.

[iii] The megafauna foes in this film were Mechagodzilla and Titanosaurus.

[iv] These were the halcyon days of violent theatrical fare featuring the likes of Stallone and Schwarzenegger.

[v] Japanese title Mekagojira no Gyakushū, which translates as “Counterattack of Mechagodzilla.”

[vi] Unlike the film used in theatrical projections (where each frame would be visible to the naked eye if held to a light) video cassettes used magnetic tapes, meaning Patterson’s attempt was futile.

[vii] Reference to an RCA (Radio Corporation of America) television. RCA was acquired by General Electric in 1986; interestingly, an RCA trademark is used by Sony Music Entertainment, a subsidiary of the massive Japanese company Sony Corporation.

[viii] Perhaps a reference to the televisions series and films of the Star Trek franchise, of which he and his family were fans of.

[ix] A type of meshing mechanical gear. Known for their strength and many teeth, the gears are both reflective of Godzilla himself, and also call back to the (simpler) gears in the video cassette. Much as these complex gears are often obscured by machinery and casings, the Godzilla mythos is likewise often hidden, leading to naïve detractors to dismiss the films as clumsy things for children.

[x] No Japanese version of Godzilla possesses scales; instead, his skin is creased and wrinkled, perhaps intentionally recalling the scars suffered by victims of Hiroshima and Nagasaki. See xxi.

[xiv] The original versions of both Robocop and Total Recall were helmed by Dutch director Paul Verhoeven, an inventive and boundary –pushing director; in sci-fi circles, both films are often considered modern classics.

[xv] A comparison of Khan, villain in Star Trek Into Darkness (sic) (2013), to the Biblical Lazarus.

[xvi] Edwards’ first film, a critically acclaimed, low-budget effort that focused on human drama rather than pyrotechnics and spectacle.

[xvii] Patterson watched Godzilla 2000 (Gojira Nisen: Mireniamu) during its brief theatrical run with his then-girlfriend while eating this brand of candy. The line refers to his intention to do the same upon the release ofGodzilla (2014); per personal communications, it’s apparent he did so with the same woman (now his wife.)

[xix] The code names of the atom bombs dropped on Hiroshima and Nagasaki.

[xx] Dense, hypertrophic scars best known from their appearance on burn victims of the Hiroshima and Nagasaki bombings, especially the so-called “Hiroshima Maidens” who were treated for their wounds at New York’s Mount Sinai Hospital after the war.

[xxi] Earlier drafts made reference to the art and history of film, with references to celluloid and digital projection. By scrapping these in favor of images reflecting the inspiration for Godzilla, he reinforces the creature’s status as a metaphor for nuclear warfare.

[xxii] Patterson’s posts to the social media site Facebook.com showed that, while entertained, he was ultimately disappointed by the film’s lack of awe and horror.