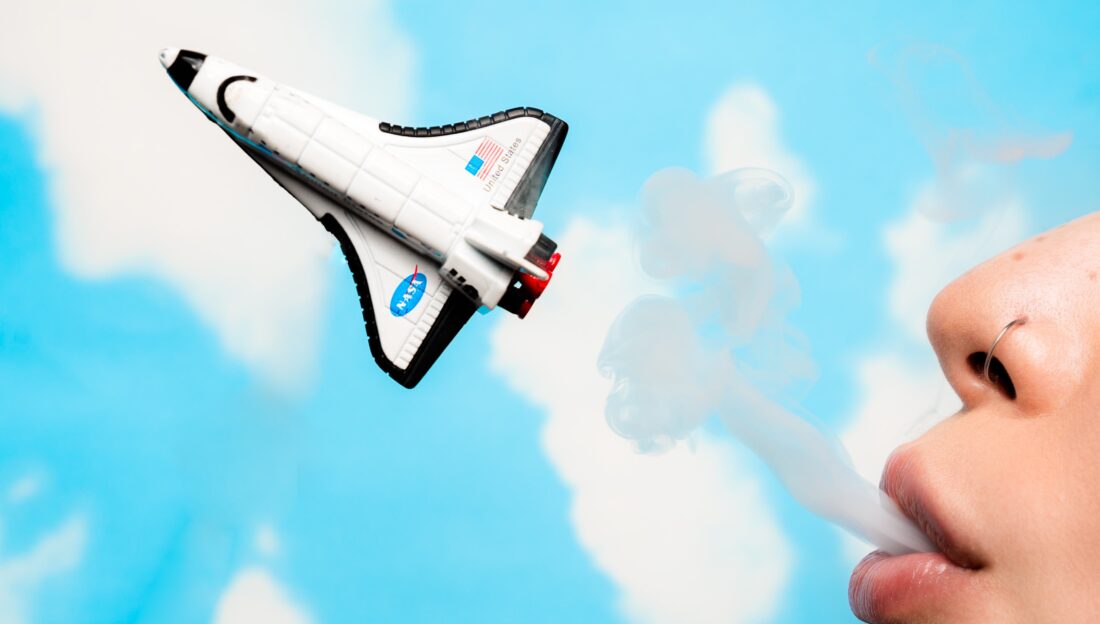 Past the point of no return something always goes terribly wrong—an exploding oxygen tank, an errant asteroid, sabotage by the Iago-like stowaway—and the spacecraft and its crew hurtle into space, cut off from their base on the moon of Planet X. The steely-eyed commander yells “Strap in” as he’s thrown from his padded chair to the blinking console. The bespectacled navigator tries to raise Mission Control. The dark-haired pilot, eyes intent on the view screen, with its panorama of stars now jumping like beads on the black marble floor of space, wrestles the yoke while snapping rows of toggle switches with the meat of his thumb.

In the passenger quarters, done up like a motel room, the bearded scientist puts his arm around his beautiful daughter, a scientist herself and brunette to show she’s the match of any man. She’s clad in the short-skirted, clingy uniform of the imagined future, the mother absent in that way the wives of scientists with beautiful daughters are always absent in stories like these. She is not thinking of her father, who in his offer of comfort is seeking comfort for himself, but of the pilot with whom she has shared a scene or two on base, and of the navigator, less exciting, certainly, but more constant. In the control room, the robot with its oil-drum torso and wheels for feet swings its vacuum-hoses wildly about, emitting sparks and smoke as it bangs into the flashing equipment with each dip of the ship, now careening through the atmosphere of an unknown planet where it crash lands on a barren, rock-strewn patch not unlike the southwest of the United States. Luck is with them. They don’t smash up on the jagged outcrops all around but skid to a stop on a broad, miraculous expanse of sand. As they shake off the daze and stagger together, they find that everyone has survived with only cuts above the eye, a bruised cheek or two, maybe a sprained wrist that calls for a sling until the next scene. The planet may or may not be deserted, may or may not be the home of aliens who harbor a murderous jealousy toward the other creatures of the universe, may or may not offer in its advanced culture and superior technology a second chance for Earth.

Meanwhile, unbeknownst to the crew but not the audience, the stowaway, unloved (if not unlovable) as a child, kicks away the panel of his hiding place, brushes at the smudge on the shoulder of his hijacked uniform, sneers his contempt for the human enterprise. His overwrought monologue lets us in on the plan he has already put in motion, the vengeance of the unloved everywhere, which he has worked out night and day since he was passed over for the posts that went to those with better-placed champions but—to their doom—far inferior and less imaginative casts of mind.

The Same as Cherry

Four Nights in the Apology Hotel