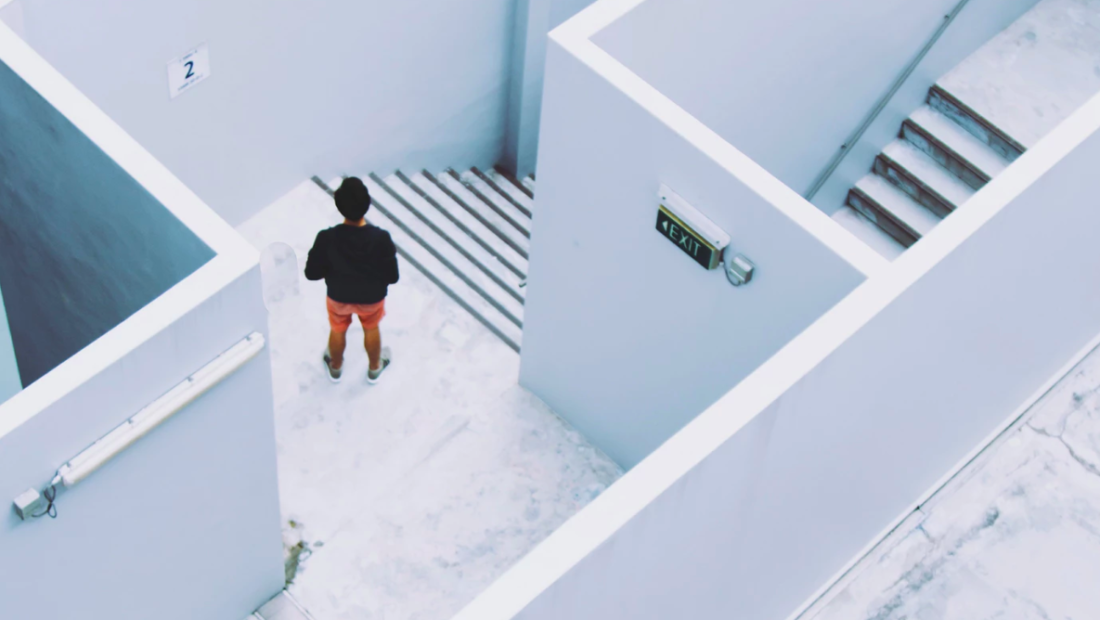 The man awakes in a room of his own design. He stretches across the green ripped up couch, looks around. In front of the couch are two leather desk chairs with a safe between them. Beyond that is an entertainment center with a TV and a VCR. In the corner, next to the couch, is a large fern and baby grand piano. On the far side wall is a barred window with no view.

“Another day,” the man thinks, groans, and then gets up from the couch to begin his escape.

He walks to the sheet of paper taped over the baby grand piano. It says, “Rules for Escaping.” He reads it.

After reading the rules, the man feels confident to get started. He goes to the safe to find the envelope resting on top, labeled, “Clue 1.” He opens it. On a notecard written in sharpie, in his handwriting, is “Your wife’s birthday.” He kneels down and twists the dial. Eight to the right, three turns left, eleven, and one turn right, eighty-four. He pulls the handle. The safe opens.

Inside there is an alarm clock with a Post-It taped to the top, saying “Press start to have some space.” He does, then sits in the lotus position. The numbers count down from 00:15:00.  He closes his eyes.

He feels his thoughts zoom by; some are heavy and sharp, and sting a little as they pass. His heart picks up speed; he feels his veins pulsing in his arms. His mind wanders. He’s in the office, getting scolded. He’s in his old bedroom, his wife is there, she’s upset. He’s walking in a field and the wind is picking up. He’s a child, laughing at pouring salt on a slug. He’s over the sink with a knife. He’s hanging in the closet by a belt. “Thinking,” he thinks, and he’s back in the room, feeling his weight on the floor. He takes a deep inhale, nestles his focus right up against his breath. The alarm goes off.

Sticking out from the pot of one of the ferns is another envelope labeled, “Clue 2.” He opens it, says, “Connect yourself with nature.”  He holds a fern leaf in his hand. Its veins look like his veins; it’s tight, smooth skin, feels like his. He holds the leaf up close. The patterns in it look like fingerprints. He looks closer. It looks like braille. He feels around for a message. He’s reminded of growth, of cells coming together to form tissue. He is just tissue, not his thoughts, he thinks.

Resting on the piano is envelope three. Inside is a note card that says, “Create art.” His fingers graze the ivory.  He plays, not very well, not at all really—just random keys and make-shift chord patterns he learned from Youtube. It sounds garbled and random, chaotic. To him it feels like Chopin, or Beethoven. His hands gently move across the line with soft precision; his thoughts trailing away in melodic unison.

He feels relaxed, ready to start his day. The clock on the wall says he still has twenty minutes left in the room. “All time record,” he thinks. He walks to the door, turns the handle. It won’t budge. He jiggles it. It’s locked; he’s forgotten the final puzzle.

The man begins to doubt the room and its purpose. He’s telling himself if he can’t remember the final puzzle to get out, then what good is it even going through these motions, day after day. Has he not learned anything? No one he knows does this. Bill from work surely just grabs his coffee, keys, and jacket, and walks right out the door. The man’s wife, same thing. This is what makes the final puzzle so important; the final test that he can live amongst the normal ones.

Frantic and looking for the final clue, he flips over each of the leather desk chairs. Nothing. He rushes over to the potted ferns and rips them right out of the dirt. One he throws onto the couch, the other he lays across the piano. There’s shredded leaves and roots and dirt everywhere. He’s shaking. The red clock on the wall is dipping under ten minutes. He moves over to the couch and starts tearing at cushions with his nails. He pulls up dirt and torn fern leaves and clumps of cotton fill. His fingers are bleeding. He’s spiraling; the darkness is creeping up inside him like wolf coming out of the shadow of the woods. It’s there at line of trees, snarling, showing its teeth. He can’t stop tearing the couch to shreds. He’s biting at the thread now, he has become the wolf. He’s clawing at his sickness, at all the years spent as this beast. From deep within the couch he pulls up a remote with a note taped to the back. “Clue 4,” it says.

The man picks up one of the leather desk chairs and positions himself in front of the TV. He turns it on. The screen is blue with a message typed in white scrolling across, “Be kind, Rewind.” He kneels in front of the VCR, presses rewind. The tape zooms and makes a hissing sound. The red numbers of the clock on the wall hit the four minute mark. The tape clicks. He presses play, then sits back in the leather desk chair.

He’s on the screen in the room from an angle above. He is sleeping on the couch. He awakes, gets up, opens the safe. The man watches himself sit in front of the safe with his eyes closed. He fast forwards to him standing at the barred window, holding the fern in his hand, through him playing the piano, then him freaking out. He feels ashamed watching this. The man on the screen is someone else; someone far gone, an animal. He winces watching himself gnawing at the cushions with his teeth. He wants it to stop. Before he gets up to take the tape out, the man on the screen stops and looks up towards the corner of the ceiling. The man doesn’t remember doing this. He’s watching himself stare directly at him through the camera, through the TV. He sees that he is crying and feels sorry for himself. He wishes he could reach into the screen and hold that man close, tell him that it’s okay. The tape ends, the clock on the wall hits all zeros. He hears the door unlock. The tape ejects, he reads its spine. “Acceptance,” it says. He tucks the tape into the back pocket of his jeans then escapes into the rest of the house to shower and get ready for work. It’s another day.