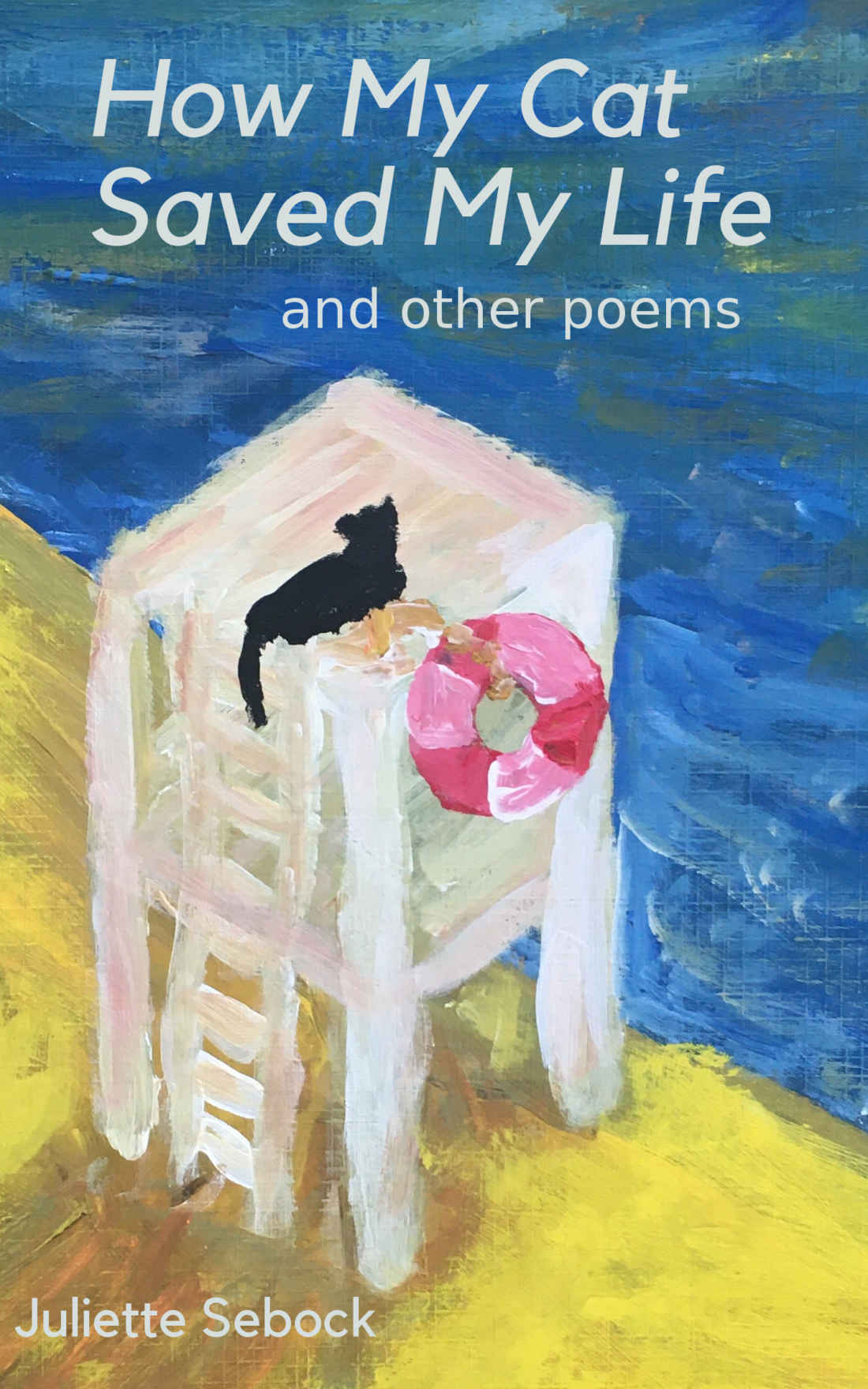 Replacing Furballs with Truffles: a review of Juliette Sebock’s How My Cat Saved My Life

I never thought I would finish – much less enjoy – a poetry collection solely devoted to our feline friends, but here we are.

Clichés are about currency. If the currency of a cliché is down, or if its use goes so thoroughly against prevailing wisdom, for me it’s fair game. Sebock’s collection (from here referred to as How My Cat) takes this unwritten (and certainly unspoken) truism and runs so completely with it that it would border on self-parody if it wasn’t so earnest, so genuine, so heartfelt. Sebock seems to not only understand all of these forces but also uses them to her advantage throughout the collection.

As such, it is an ode to cats, and certain specific cats, as much as it is an ode to loneliness, growing up, relationships, community, the world around us, and oneself as an object as worthy of love and attention as those cats/specific cats. Self-love permeates the collection to such an extent that one is willing to forgive the (shockingly few for me) times when the compounding clichés on display begin to grate on the nerves. It is also a force throughout the collection that allows the content to not fray because of the said clichés – it is a very focused collection that takes its time with its revelations and never lets awkward poetic construction get in the way of how convincing those revelations become.

These 22 cat-adjacent poems wear their hearts on their sleeves and remain oblivious to any potential cries of poor artistry therein. At least, to me it seems that Sebock’s poems are self-aware of their heresies against prevailing wisdom, and the knowing transgressions come across less as Sebock not being cognizant of them, and more of the authorial choice to fully engage and inhabit them in all their pomp and circumstance, fluff and hairballs and all. In this litany of cliché, one thing becomes a virtual certainty: the poems are allowed to breathe on the page, and their imagery is allowed to shine.

It would not be a very good cat collection if it didn’t include descriptions of cats, their anatomy, behaviors, attitudes, etc., and in this respect the collection is a winning usage and rebuke of formula. The prose poem “Origin Story of a Ball of Fluff” takes its title’s description and hammers it into the hearts of its readers repeatedly in the second paragraph, but it doesn’t seem to matter because of how elegantly the poem itself is constructed, how effortless it wears its prose format. “I Love to Watch My Cat Sleep” is about literally just that but becomes more by virtue of the careful attention paid to the subject. “I forgot how much my own poems affect me” almost makes me as a reader want the poet to stop talking about cats and move on to more “substantive” material, but then the poem itself bucks this initial desire of mine by just being an honest and good poem, also coincidentally about (but also very much not about) its titular subject. The only poem where the structure doesn’t combine with the execution fittingly is “Scoop”, but even that makes up for it with its odd, last role-reversal image of a cat somehow cradling the poet instead of vice versa.

The title poem is very wisely placed in the middle, for all the other poems, in their various unassuming forms, to whirl around and comment on, as if in a feline frenzy. It is about pets helping us humans when we are at very low points in our lives, but it is also tangentially about those very low points in our lives. The fact that Sebock keeps her pain universal while at the same time crafting a specific narrative around a specific cat attached to a specific person, is one of the joys of the collection, and this joy reflects outward to the surrounding poems like a cuddle vortex. After this poem, the stories become more personal, but the universal flavor of this specific poem still lingers.

I want to end with a discussion of another particular poem in the collection, called “Tiny Toes, Kitty Grows”. It remains an outlier in the collection, because it dips its toes both in nursery rhyme and severe alliteration. The former aspect claws its way into the reader’s heart because it is such an outlier (albeit an eventually expected one in a collection of this subject matter). But just because the format is expected doesn’t mean its execution isn’t completely winning, because it is. One of my ancestors is James Whitcomb Riley, and so I’m aware of the tradition, but I can also tell that Sebock is aware of it, and all the alliteration in the world couldn’t change the fact that Sebock inhabits both the nursery rhyme format and her subject matter with such aplomb that one can’t help but smile.

I want to talk about rhyme, and reason, and all the things that can’t be done in poetry but are done anyway, either by bad yet well-intentioned poets, or by good poets whose intentions are unclear. The intention of the author shouldn’t matter to the work, and it is this fact that Sebock seems to recognize, in order that her collection can lift itself above the steaming heap of the frequent poetic abuse of its own subject matter. It shouldn’t matter that the poet’s work comes across as genuine or heartfelt – what should matter is that the poetry feels genuine or heartfelt, that the reader can feel both winding around each other yet freeing space for one or the other to add to the discussion. And it is here that Sebock’s collection succeeds so staggeringly. It is not an underdog because its subject is the cat, it is an underdog because we as people often don’t value what we say we value, and we don’t appear to value what we do value in the first place; it’s about looking at a furball and naming it.

How My Cat Saved My Life, and Other Poems can be purchased from Bottlecap Press’ online store at https://bunkysbooks.com/products/how-my-cat-saved-my-life-and-other-poems-by-juliette-sebock, as well as wholesale via bottlecappress@gmail.com