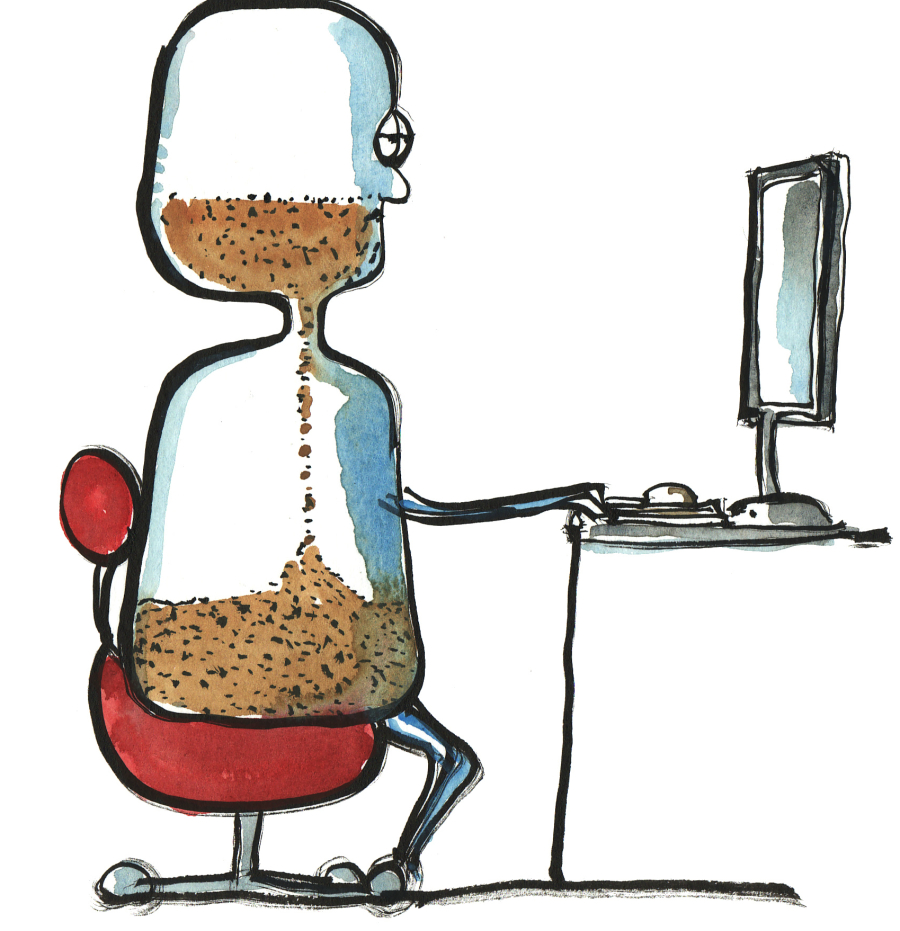 The secretary glances at him, but continues to speak into her headset as she turns the pages of a magazine. Sounds like a personal call. She motions for him to sign the guest book and take a visitor badge from the stack on her desk. He sets his bulky tool bag gingerly upon the tile floor and discerns the far-off sound of an infomercial. She finishes her call and directs him to the copy room.

The commercial harkens from an outdated television barking a sales pitch in a large, empty break room adjacent to the copier’s dwelling.

He recalls being at this company several years ago, employees awhirl everywhere, but no more.

The television pitchman explains the versatility of a garden hose that takes up less room and costs only . . . “$19.99!”

The company’s workforce is virtually gone due to overseas competition.

The hose is made of a “special fiber, no more tangles or kinks!”

The copier is an expensive model, engineered for more volume than it currently serves.

If you call in the next few minutes, they throw in . . . “a sprinkler attachment, free!”

The copy meter revels it was once utilized quite a bit.

The secretary says there is a paper jam, the collate feature does not work, and the machine must have staples so she is not burdened to manually staple pages together for a project due at day’s end.

After giving the machine the once over it turns out there is a paper jam, but the collate feature works.

An actual customer. . . “not an actress”, gives a glowing testimonial about the wonders of the hose.

He tells the secretary the jam is cleared and he would be happy to show her how to set the machine to collate. She says she is too busy and does not have time, and scrawls an indecipherable signature on his paperwork as he collects his tools. Before leaving, he turns to tell her not to work too hard, but she has already settled into another personal call.

On his way out, he stops at a trash bin by the exit door. He reaches into his jacket and smiles as he tosses a full staple cartridge and the spare he removed from the machine into the trash.

He calls dispatch to let them know he has finished the job. Then he makes one more call.

As he drives out of the desolate parking lot of the once profitable Acme Hose Company, he daydreams about using his soon to arrive. . . “no kink” hose.