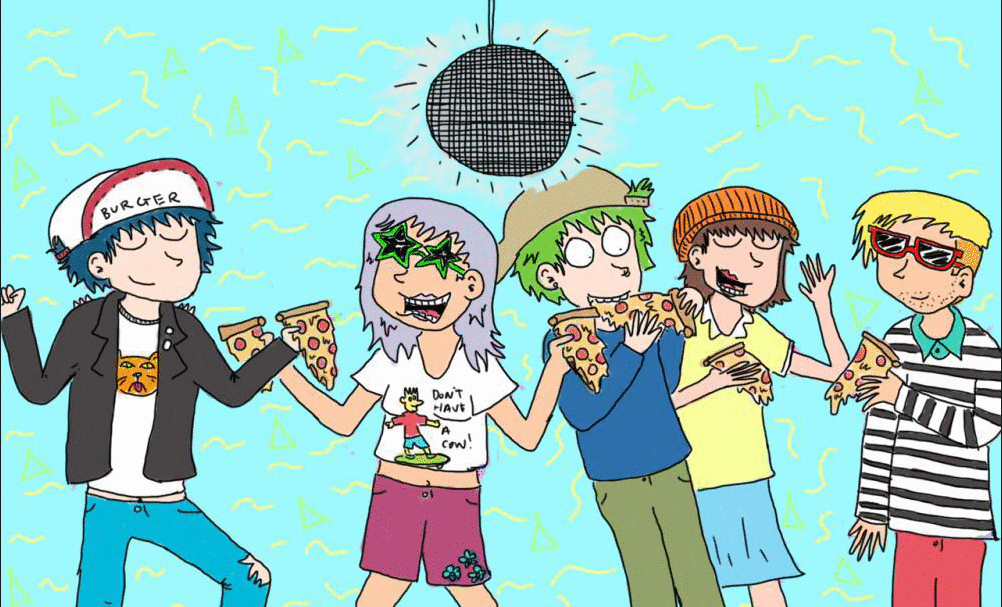 “She got bit…I left her. I left her…” Joe put his hands on his knees and his head down. Breathing hard. In, out, in out. “Fuck I fucking left Patricia.”

“What?” Joe looked up at her. She looked too calm and smooth.

“‘Was bitten’ is the proper grammar. Just because things are bad doesn’t mean we can let them fall apart completely. We have to remember who we are.”

Joe sat down on the floor. There was no chair for him and even if there was, he would have chosen the floor just to spite Sarah.

“If we are responsible for repopulating the planet I want our new world to be eloquent,” Sarah explained, calmly.

Marlene spat on the floor and they all looked at it. It bubbled.

Jennifer moved over to Marlene and put a hand on the back of her chair. “Five twenty-somethings. I guess I’m the token lesbo,” she laughed. “That makes me expendable right?”

“We need a leader.” Sarah spoke clearly, each word concise. “We can’t just go into this willy nilly, that’s how we lose good people like Patricia.” She said Patricia’s name without a hint of empathy.

Joe got to his feet, fists clenched. “Good people like Patricia? She was more than good people you fucking bitch.” He moved towards Sarah and Mark intercepted him. Hand on chest. Deep breath.

“I wanted to be a ballet dancer,” Marlene said.

Everyone looked at her.

Jennifer circled around in front of her and sat at her feet. Looking up. Waiting.

“I was too chunky. That’s what they fucking told me. Years of dance lessons, undone by body type.”

“You’re not fat,” Jennifer said. In all of her dreams Jennifer knew the exact shape of Marlene’s body.

“No…I know. But I’m not a goddamn swan princess am I?” Marlene looked down at Jennifer and smiled.
There was something in Jennifer’s face that made Marlene want to stroke her hair. So she did.

“We need a leader,” Sarah said again. On repeat. Robotic and perfectly logical. “That’s how the world works: people lead and people follow. Even Jesus knew that.”

“What the fuck does Jesus have to do with anything?” Joe asked. He and Mark were still in the centre of the room; Mark’s hand on Joe’s chest. Like dancers.

“Jesus was a leader,” Sarah said.

“‘Going to’ fly…not ‘gonna’.” There wasn’t a single person in the room that didn’t want to open the door and throw Sarah out in that moment, save Sarah.

“We still haven’t solved the water problem.” Mark released his hold on Joe and Joe slumped to the floor.

“We have more than water to be concerned with.” Sarah clasped her hands together as though she was praying and closed her eyes. “There’s more to life than water. We need purpose, direction, momentum.”

“I guess this means I won’t be making it to the Justin Bieber concert.” Jennifer didn’t want
Marlene to be alone in her confessional state.

Everyone paused and looked at her, save Sarah whose eyes were still closed in contemplation of divinity.

Everyone laughed, even Sarah from behind closed eyes.

“I didn’t know where I was going anyway,” Marlene said, “so better here than anywhere else I guess.”

“None of us knew where we were going, that’s why we’re here.” Joe rubbed his face and his voice was muffled by his calloused fingers.

“Two thousand dollar leadership camp and we’re stuck with a Jesus freak, a lesbo Belieber and failed ballet dancer.” Mark wasn’t talking to anyone in particular but Joe nodded as though it was a private conversation between friends.

“I’m a coward, so I decline the role of leader if there’s a vote,” Joe said.

Mark slapped him on the back in a jocular fashion. “You had to do what you had to do.”

“No I didn’t. I could have stayed, helped her. Staunched the blood flow. I took first aid when I was kid, I know the rules.”

“We all make sacrifices,” Sarah said.

“But we shouldn’t have to!” Marlene shouted, standing. “We’re young, we should be chasing our dreams and texting our friends and getting so drunk we can’t see.”

“Maybe that’s part of the problem.” Sarah opened her eyes. “A general lack of momentum amongst the youth of today.”

“Don’t pretend you’re not a youth of today just because you dress like an eighty year old Mormon,” Jennifer snapped.

Sarah looked at Jennifer, then down at herself. “I’m just saying maybe there’s a reason for all of this.”

“Who gives a fuck about a reason?” Mark said. “Yeah maybe there’s a reason we’re alive and the earth spins around the sun and all that fucking crazy cosmic god shit. But none of that means anything if we don’t have water or food or limbs…or brains.”

“Patricia was going to be a vet,” Joe whispered. “I don’t even know why she was here. She had everything figured out and I was scared because she did and I didn’t.” His eyes were rimmed with red and everyone could see he was trying to hold back his tears. “Maybe that’s why I left her, because I was afraid of her strength.”

“That’s nonsense,” Marlene said. “You left because you had to.”

“Yes. Fuck yes Joe. We all have to do things in our lives don’t we? We all have to make a choice at some point or another to get on with it. Move on or stay behind and get eaten alive.”

“Patricia would have said the same thing.” Joe looked at Marlene. Marlene looked at Joe. For a moment there was no one else in the room. Jennifer’s heart broke at Marlene’s feet.

Sarah interrupted the silence. “We need to rebuild, start from scratch. We need jobs and lists and a way forward. We need a leader.”

No one moved or refuted her claim. Everyone felt tired, heavy, slow.

“We’re nobody…I could be any Jennifer…a thousand, million girls have my name. I could be anybody and nobody would miss me.” Jennifer crawled away from Marlene’s feet and put her back against the wall. “None of us have names that resonate. Maybe we should make new ones. I could be something ostentatious like Enigma.”

“Names don’t matter, people matter,” Joe said. “Patricia could have been Cynthia, Nicole, Simone, either way she would have been her.”

“I’m talking about reinvention.” Jennifer spread her arms wide and then let them fall to the floor in an exaggerated shrug.

“Whatever…it was a shitty idea anyway.” Jennifer didn’t want to be in agreement with Sarah.

Marlene licked her lips and Jennifer strained towards it, like a flower to the sun. “I’m thirsty.”
Jennifer jumped up. “I’ll go for the water, I’m just a token anyway.”

“There are no token bisexuals in anything, ever,” Mark said.

Jennifer closed her eyes, tried to think, came up with nothing. “Fine whatever, but I’m the odd one out anyway. If we’re repopulating there’s only two guys.”

“Yeah…I could take one for the team and fuck two of you.” Mark laughed, but no one else did.

“We need water right? And I don’t know what I’m doing with my life, so I might as well be the hero.” Jennifer paced the length of the room.

“None of us know what we’re doing Jennifer…that’s why we’re here.” Marlene stood up and walked over to Jennifer. She cupped Jennifer’s face with both hands and Jennifer pressed into the warmth of her skin. They stayed like that for a long moment and no one knew what was going to happen. Nothing happened.

“Some fucking guru thought they could tell us everything we needed to know about ourselves but where the fuck is that guru now? Blood and guts. So fuck a leader, I’m not following anyone,” Mark said.

Sarah shook her head. “We need a democracy. We need a government. We need order in the chaos, a light in the dark.”

“I don’t believe in democracy.” Everyone looked at Joe. “I never have okay? It’s just that I don’t think the general population is smart enough to choose a direction for the world. I don’t think they should be allowed.”

“Are we smart enough?” Marlene asked.

Jennifer hadn’t moved despite her claims of heroics. So far the only real hero was Joe, the one who had tried and lost.

“I don’t think I’m smart enough,” Joe replied. “I never voted. Patricia thought I did, she thought I voted for the parties she voted for, every time, since we were eighteen.”

“That doesn’t mean you aren’t smart,” Jennifer said. She was standing as close to Marlene as possible, remembering the feeling of skin on skin. “There are different kinds of smarts. Street, school, life.”

“We have to develop our own kind of smarts now,” Mark said.

“Our own type of intelligence,” Sarah offered. “‘Smarts’ is slang.”

“Who the fuck cares?” Joe didn’t stand up but he puffed his chest out like a bird. “Who the fuck gives you the right to correct everyone’s grammar?”

“Someone has to keep the order, or this will just devolve. It’s what I know how to do. My dad died, my mom left and I was the one who had to teach my sister the right way to speak. Words have power.”

Everyone was silent. Sarah’s confession was different than the others, more revealing. They felt it in their hearts.

No one moved. They all felt their hearts beat. Their stomachs growl. Their tongues dry and wilting in their mouths.

“We came here to find that out, so let’s fucking find out. Let’s find out together.” Marlene moved around the room and gathered things together; spare boards, a chair, a leather jacket, a hammer, some nails. She offered them to everyone, like gifts on a very special anniversary.

“Does this make you the leader?” Sarah’s voice was small and they all knew then that she wasn’t vying for the role of leader, but that of follower.

“We can all be heroes.” Jennifer slipped into the leather jacket and broke a leg off a nearby stool. “Let’s remake ourselves.”

Together they unbarred the door and stepped out into the world.

Star Spider is a writer from Canada where she lives with her awesome husband Ben Badger. Star is in the process of seeking publication for her novels.  Her work can be found in many places including Empty Mirror, Flyleaf Journal, Gone Lawn, Bitterzoet, Apeiron Review and Klipspringer Magazine.