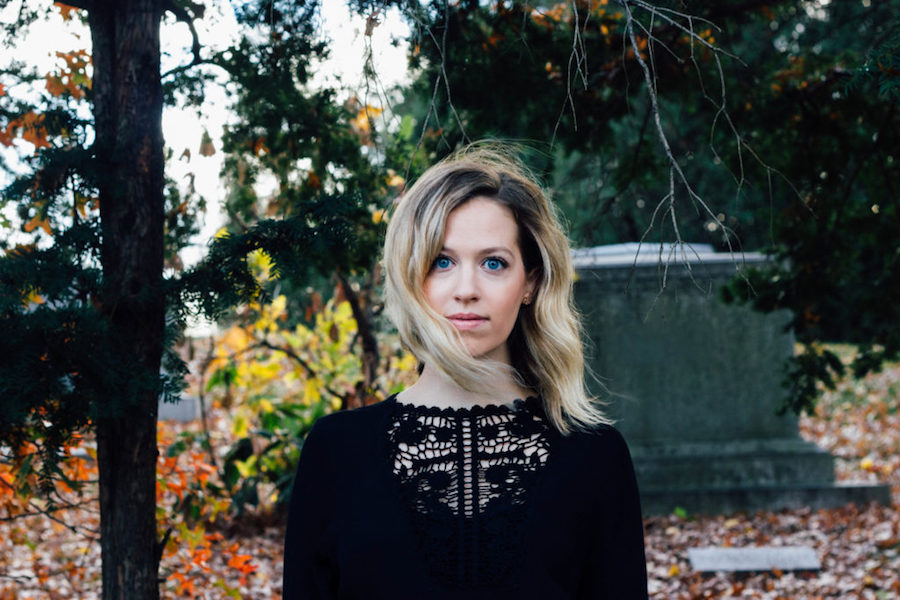 Sarah Jean Grimm is the author of Soft Focus, the winner of the 2016 Metatron Prize. She lives in Brooklyn, New York and is a founding editor of Powderkeg Magazine. Recently Sarah answered some of my questions about the themes she explores in Soft Focus, the process of how it came together, and her experience publishing with Metatron Press.

Reading through Soft Focus for the first time, the body seemed to me to be the main thematic thread of the book. Almost every poem explores some aspect of the body, whether it is human or animal bodies. Did you set out at the beginning to explore this topic in the book? Did you sit down and think, “ok this book is going to be about the body”?

I didn’t set out with that intention, but poetry has a way of surfacing fixations. I am very conscious of corporeality–its limits and horrors as well as its pleasures. This strikes me as such a human concern. But I’m equally preoccupied with the animal, and in interrogating the false distinctions we draw between “human” and “animal.” I’m fascinated with the ways in which male dominance is implicit in the consumption of both female and animal bodies, whether we’re talking about images or flesh. So I think a lot of these problems have seeped into my poems, leaving the speaker(s) of Soft Focus to confront the discomforts of inhabiting a body.

One part of the book that I loved is the line, “And how are our bodies not/the most boring thing about us by now,” from the poem “Shapewear.” That really struck me as you acknowledge that it’s kind of incredible how meaningful our bodies remain as a subject of art. Do you have any thoughts about this line in particular?

That poem deals in part with the things we put our bodies through and the ways we evaluate them accordingly. The female body is inherently political, and by extension so are the clothes we choose to put on it. This poem takes undergarments as its starting frustration, and builds from there. I’m thinking of an internet rant I recently read about how we sexualize young girls when we send them home from school for dress code violations, at the same time teaching boys that they can blame their actions on female “distractions.” Is it not this same line of thought, taken to its extreme, that allows us to suggest that a victim of sexual assault is “asking for it” because of what she’s wearing? This poem is kind of a fuck you to that whole dislogic of patriarchy. But it’s complicit too–the speaker wants to be looked at and valued in the context of this system, even though she recognizes it as destructive. So this line in particular is sort of an incredulous acquiescence; it raises a question but doesn’t offer a solution. I think solutions are rarely the domain of poetry.

I really enjoyed the last poem of the book “Afterglow” as it points to the end of the body, with animals sort of crashing into a new existence defined by technology “the chickens lose their heads…I save them as a series of zeroes and ones.” We all have a desire to get out sometimes. Wanting to escape our bodies is a very old wish. But at the same time all of our experience is mediated through our bodies, “God I was so bored before I got born.”

“A very old wish”–I love that. Maybe it’s the oldest wish. That’s the well from which ideas of heaven must spring, right? There’s a definite appeal to the prospect of some glowing afterlife without physical constraints. So, the book winds up in this post body moment, an even playing field at last. But what is play, post body? There’s pleasure to be had on this plane, perhaps the only plane. If we sometimes feel trapped in our own meat, wanting more, as this speaker does, still it must be admitted that our whole grasp of what “more” could be is body-contingent.

Along with the body there is this idea of performance that comes up in many of the poems. There is struggle to determine what exactly constitutes, “me” outside of roles I know how to perform, that I’m expected to perform. At least I see it that way, in lines like, “existence is a compromise / An agreed upon reality / Upheld by ceremony” and “I brushed my teeth and lined my eyes / came back to be and felt mistaken” And all of this is, like everything else, gendered. I think the way you explore the gendered aspects of “performance” in the book is one of my favorite parts. What are your thoughts about how you use poetry to explore the ways we “perform”?

I’m definitely interested in the ways in which we construct and present ourselves for public consumption, the dramaturgy of everyday existence. I think it’s apt to use the word “explore,” because again, I’m not trying to offer answers here, but I am looking at some questions through multiple lenses, hopefully reflecting ideas with variance. And there is an abundance of mirrors and lenses in this book; there’s a recurring gaze and a sense of distortion that follows. Can anyone see themselves accurately, or do we mostly reflect what we imagine others’ perceptions of us to be? And how might that be especially true for a female-identifying person, on whom society has projected a very specific set of visual values? As a woman, how do I navigate a world both natural and man-made, remaining soft and hard simultaneously? Throughout the book, I try to complicate this kind of dualism with fragmentation, a lack of focus that is also an adaptive strategy of female existence.

Another thing that I liked about Soft Focus is that it has a great sense of cohesion. I think these themes hold it together very well. While reading it I felt as though every poem belonged. What was the process of putting this book together like? I know some of the poems were published previously. Did you have a specific vision of the kind of book you wanted to create? Did the work change greatly during the editing process?

Thanks so much. I let myself off the hook in terms of maintaining a consistent voice or persona throughout, telling myself that the focus of the book should be soft, as it were, and that a polyphonic approach would yield its own cohesion, a sort of din. So the speaker shifts throughout, while her fascinations and anxieties (same thing?) are pretty consistent. But Ashley Opheim, the founder and editor of Metatron, was key in laying the book out in a way that lets every poem breathe and also build on the preceding page. She saw a progression that was nascent in the manuscript, and really helped bring it to light.

You live and work in New York City and I’m guessing you wrote a good part of the book there. Do you think the place you live in affects you much when you’re writing? Do you find New York coming up for you a lot in Soft Focus?

I think New York affects the way I write, but I’m not sure it comes up for me in any thematic sense. Compositionally, though, for sure. I do most of my writing on trains, taking notes in my phone while I commute to and from work. So when I later sit down to make sense of it all, there’s often a disjointedness that can be really useful. Like I won’t remember what conjured a specific image, but it’ll give rise to a couple new images, and suddenly there is a tendon holding an idea together. Something like a poem.

Soft Focus won the 2016 Metatron Prize. We did a reading together not too long ago in New York where we got to connect with some Metatron people. You have done a few readings in the U.S. to promote Soft Focus, and travelled to Canada to read as well. Describe what your experience publishing a book with Metatron has been like. What initially drew you to submit your manuscript to the Metatron Prize? What has been your experience with the community so far?

Metatron has been incredible. And I’m glad we got to read together in New York; I’m so grateful to be part of the Metatron matrix. When I submitted my manuscript to their prize last year, I already owned and had read a good portion of their catalogue. I thought they made beautiful books and I could see our aesthetics melding. The collaborative process of putting the book together and seeing it through to publication was such a positive and encouraging experience. And their events have been characterized by that same enthusiasm. They’ve built such an engaged community and they continue to knock down walls in the small press world. Ashley and her coeditor Jay Ritchie are tireless, and their combined creative energy would be enough of a reason to want to work with them, but they’re also open-minded, easy-going, warm, sensitive people, and I’m really thankful to have befriended them along the way.

You can buy Soft Focus by Sarah Jean Grimm HERE.