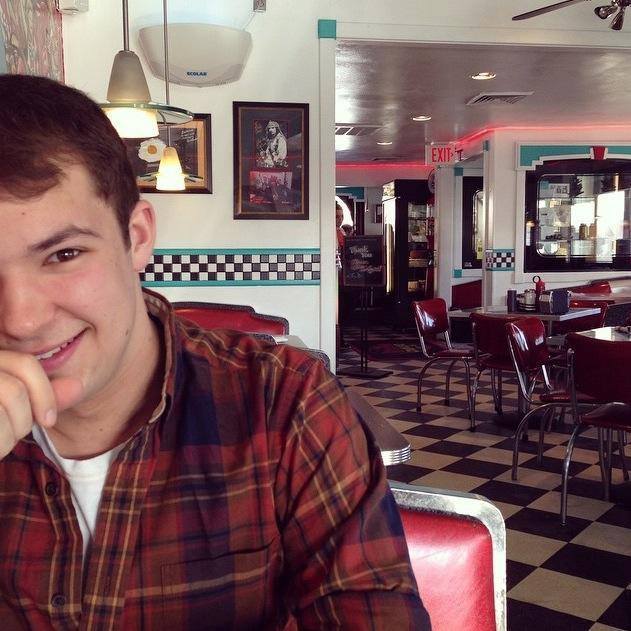 Kevin Bertolero studies Literature, Philosophy, and Art History at Potsdam College. He is the poetry editor for Mixtape Methodology, senior editor of North Country Literary Magazine, and is the founding editor of Ghost City Press. He tweets @KevinBertolero

I didn’t start the press to make money (and anybody who is in this business for the money is going to be very, very disappointed). I started Ghost City so that I could publish authors who I loved, and to publish work that I thought needed to be shared.

Your press, Ghost City Press, has created one of the most exciting literary  catalogs of the summer with your Micro-Chapbook Series. You’ve included names from all over the independent literary scene. Where did you get the idea for a micro-chapbook series that is not only free to download but a weekly event?

I took an Art History course on Classical Mythology this past spring, and in place of a final paper, we had the option of composing a “creative project,” so that’s where the poems for my micro-chapbook Modern Thought came from. When I had everything put together, I thought about putting it out for free through Ghost City, but that got me thinking. I try to read as much poetry as I can from the indie-lit community, but doing so can get rather expensive. So I started asking some of my favorite poets in the community if they’d be interested in putting something together to release throughout the summer. They all said yes really quickly, and pretty soon I had a list of more than forty writers who were interested in participating.

The series is free because I really just hate dealing with money. We only charge for our books so that we can afford to keep putting more out. I didn’t start the press to make money (and anybody who is in this business for the money is going to be very, very disappointed). I started Ghost City so that I could publish authors who I loved, and to publish work that I thought needed to be shared. Money, though, is what helps everybody to survive so that we can keep making art. And so, when people go to download any chapbook from the summer series, they have the option of donating to that poet. All of the authors involved in the series get to keep 100% of the donations made for their title, which I think is pretty cool. The series is a nice way to bring together everyone from our growing online-indie-lit community, and to provide some new poetry for people to read throughout the summer. It’s also fun to see what everybody comes up with. There are some pretty unique little collections that I’m excited for everyone to read.

What are your plans for Ghost City Press as it stands?

I really want to publish a novel. So far we’ve only published collections of poetry–largely because it’s readily available and relatively easy to edit and produce. I’ve had a few opportunities already, but I’m looking for something that really jumps out at me. A novel is going to be an investment for us, and I want to make sure that we have a manuscript that we’re excited about and that we think needs to be shared.

Our primary goal, though, is to keep publishing work that we find exciting and interesting. I started the press so that I could publish the kinds of books that I would want to read, and hopefully that other people would want to read as well. It sounds kind of selfish, but it’s worked out pretty well so far.

Your original goal for Ghost City Press was to publish writers emerging from Syracuse, New York. What are your thoughts in regards to the literary scene in Syracuse? What Syracuse-based writers do you consider most notable?

What immediately comes to mind is the creative writing program up at Syracuse University. My high-school creative writing teacher, Peter Mishler, received his MFA in poetry from SU, and I absolutely love his work. I’m lucky enough to attend a summer writing conference at Colgate University each year, and I’ve met several Syracuse MFA candidates there who have absolutely amazed me. SU has an amazing faculty, too. George Saunders, Bruce Smith, and Dana Spiotta—three of my favorite writers—all teach up there. Another one of my favorite writers, Raymond Carver, used to live and teach in Syracuse as well.

I think Syracuse is a lot more artistically focused that people give it credit for. Not only with literature either, but in regards to music, visual art, and general culture as well. We have our own film festival, there is always a great band to go see, there are independent cafés to hang out at, and local restaurants to eat at. We have breweries, movie theaters, thrift stores, record stores and book stores (Books and Melodies is my favorite). We regularly have festivals downtown and the NY State Fair is in Syracuse. And of course, the city goes crazy over SU basketball. There’s a lot of energy in the city, and a lot of the stuff that happens here is local and independently run. All of this creates a pretty great, creative space that I was lucky enough to grow up with, and I know has produced some other amazing writers and artists as well.

Even outside of Syracuse, there is a lot going on in Upstate NY. Buffalo has a pretty vibrant arts community that GCP author, Justin Karcher, is a part of. After we published our first few books, we realized that limiting ourselves to Syracuse would be a real shame, and so we actively started trying to reach out to the greater indie-lit community hoping that we’d be able to help Central/Upstate NY artists reach a wider audience. From there, we just keep meeting new people and new opportunities are always becoming available to us. We hope to keep growing and sharing art with as wide of an audience as possible.

What do you consider your biggest accomplishment as a publisher so far?

Giving people the opportunity to have their work published is always a rewarding feeling. With Ghost City Review, we’ve been able to publish writing from some of the bigger-name poets within our community alongside some new writers. We publish the work that we think stands out, and I’m just really proud of how quickly we’ve grown. Our first book was released in June of 2015, and since then, we’ve published four full-length collections of poetry, seven chapbooks, and two volumes of our journal. We’ve organized the summer series and have a few more titles in production that will be released in the fall. It takes a lot of time and effort to make this happen, but it’s all worth it. Knowing that people are reading the books we’re publishing is good enough for me.

Which of the micro-chaps in the series excites you most?

Ugh, this is a difficult question. All of the micro-chapbooks are so completely different and unique. Davis Tate’s Fifth Season Fever really stuck out to me when I first read it. Luis Neer is doing one called H.A.G.S., which is freaking awesome. I’m pretty sure Dalton Kamish came up with that title on Twitter. I’m looking forward to reading what Shy Watson and Theodore Fox come up with. Sara Cantwell is an amazing writer and her manuscript is beautiful, so that’s going to be a special one. Oh, and Katie Rice and Lisa Keller are doing one together and it’s going to be super weird and amazing. They run this cool TinyLetter called FUTURE$RICH, and I’ve been told that it’s going to be a lot like that. I’m definitely leaving some names out, but I’m beyond excited about everything we have going on this summer.

Knowing that people are reading the books we’re publishing is good enough for me.Click To Tweet

What’s your favorite thing to eat while you’re writing?

Pizza flavored Goldfish, but only the regular ones. The flavor-blasted ones taste like trash. Also, there’s this discount grocery store in Potsdam that sells $2.00 frozen pizzas that don’t entirely taste like cardboard. Those are pretty good too.

I love listening to Brad Listi’s Other People podcast, which features some pretty well-established writers alongside emerging writers. Almost all of the people he interviews, however, come from the big presses like Penguin, Random House, and even Graywolf. Nobody from our smaller indie community ever seems to make it on to the show, and I wish that there were something like that for our community. I want to hear what the smaller indie authors have to say about their work, and just about life in general.