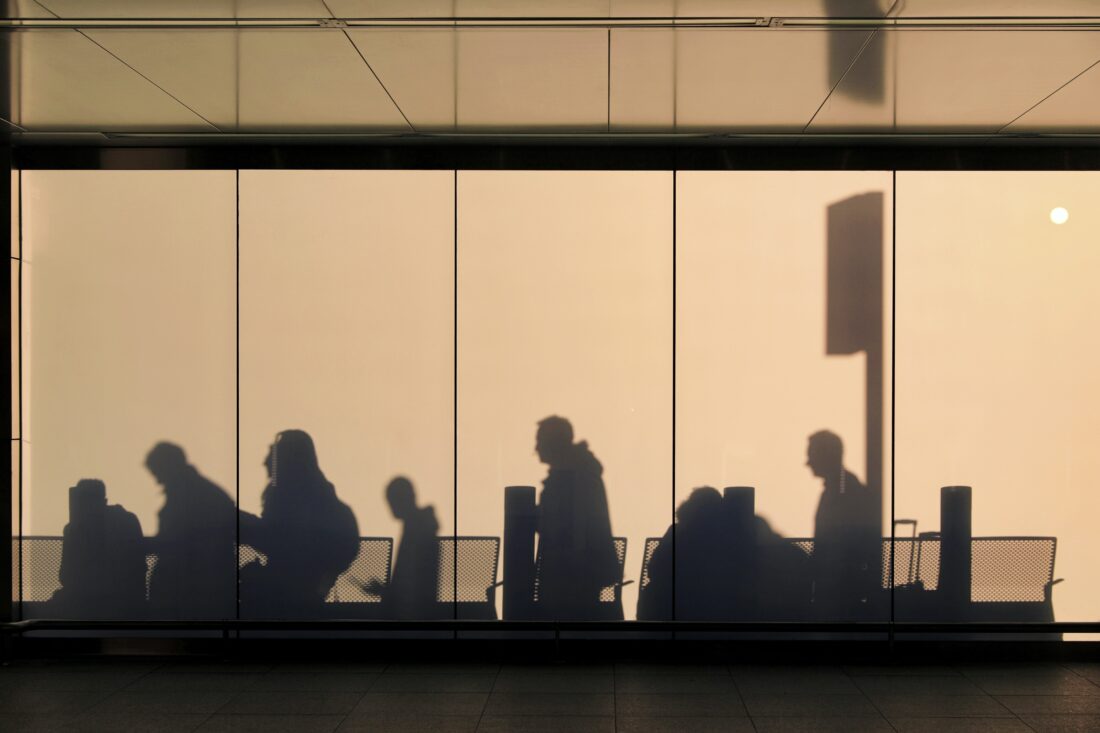 His roommate hands him a blue pill to take before his flight. Here T, this’ll help, he says. T doesn’t understand.

He sits on the flight and swallows the extra-strength Xanax and waits to fall asleep. He enjoyed the JFK terminal. He’s never spent much time in the LAX terminal, where he’s departing to, but feels he wouldn’t have to sit down or do anything other than walk through it and ignore everything around him. For whatever reason, T adopts a smug look upon exiting a plane, he the one having already arrived to his destination, already done with the tedious nature of flying, the stupid little obstacles and delays keeping you from your trip and or your family or some affair in another state. Look at these people lugging around their bags and their homes on wheels, waiting to go sit and sweat with strangers way up high. He does largely ignore them, though.

He arrives in LA and his friend R picks him up from the airport. When they get to R’s house, where he is staying, R says: There are always sirens in LA. Every drive. The second you show up though, no sirens.

T turns to R and says: Sunbathers and the homeless look the same laid out on the beach. All bodies. Slight differences altering which is more aesthetically allowable. R didn’t respond. They were sitting on the couch, smoking, watching a soccer game.

He didn’t repeat what he had said. They went over to their friends’ house, four of them they had known from college. K greeted them at the door, and asked if R had gotten taller. R said he had, that he would be growing till he was 26, that to grow for the first fourth of your life wasn’t all that much of your life. R asked K if he was taller than his dad, and he said yes, and R said he was taller than his dad too. T said that if everyone was taller than their dads then the population would exponentially rise in height. This is how giants were created, said K.

They went inside and sat on a different couch and smoked from different pipes. T felt he was too high, and leaned back into the sofa and curled up a blanket in his hands under his chin, and peered around him at the past iterations of himself standing alongside, and he tried to inhabit them, step back into them for a moment. He couldn’t, not really. The edges shimmered and wavered, and then violently cast him out. He could only be the pervious version for a short length of time.

R drives them to a bar. They sit under the red glow at a stoplight and watch a man sitting on the median. He listens to a preacher’s voice carry out from the radio on the ground between his legs, as if the yelling man is living inside it, in his church. The preacher urges, pleads, and begs, that the demons “BACK UP!” That God and Jesus and the Holy Spirit and all other available options cast them away, force them back, to BACK UP! BACK UP I SAY! T watches the man listen to the shouting’s, and isn’t sure it’ll work. It can’t be as easy as this.

R says: The man begs for change so he can listen to the preacher beg for help for this world until the preacher makes enough money so he doesn’t have to speak to these kinds of people ever again.

What does that man think when a new voice appears on the radio? Asks K.

That either the preacher or the demons have won, says T.

I don’t believe any of that, says K.

They arrive at the bar and sit on their stools and don’t say anything and think about what they believe in. They go home a couple of hours later and R drives T to the airport in the morning so he can fly to San Diego.

His mom picks him up from the airport and whisks him towards home to where he has risen and become so many times. He tells his mom that he’s been reading and writing mostly, that he tries to go walk around but it seems superfluous sometimes.

His mom says: The world is beautiful even if you’re idle, sitting and staring, watching.

He looks out at the car window at the palm trees and the cacti and the aloe plants. And the rocks and the sand. And the suburban houses and their fake beach-y themes. He watches the little town he grew up in go by and the beach go by and the tan people and the blonde hair and the policemen and the military men go by and he doesn’t say anything to his mom.

She says: I can see how it’s too much to ask people to participate all the time. The requirement is that one can fake the belief that you should be participating. In life. In whatever that means.

T: I don’t know what that means.

Afterwards, while discussing, make sure you present your experience as real, his mom said.

T: I don’t believe any of that.

His roommate hands him another blue pill when he opens the apartment door back in NYC. He smiles and swallows it before lying down in bed.

He can hear his roommate laughing from the other side of the wall, and he’s happy to be back here, as he makes his way to the bathroom to throw up.

He finishes and calls all the people he has seen in California and tells them he loves them and misses them and they need to come here next time. He smiles again.