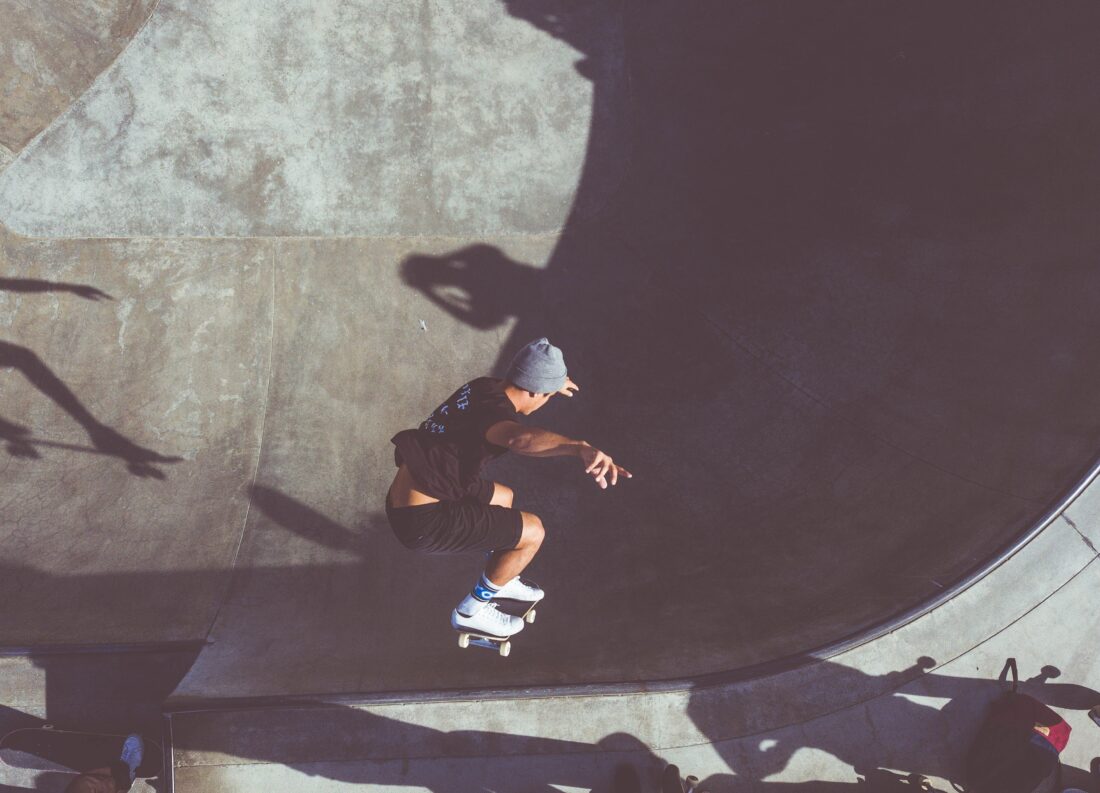 My kid busted his lip real good this morning. Hit a crack and flew forward on his face. Do we have to worry about any of that? No, right? It was gnarly. I think his teeth are fine. He was wearing wrist pads, so his fingernails got really fucked up too. But, so, I didn’t get paid today. Didn’t have time to schedule another session either. Lots of blood.

My kid started crying out of nowhere. We were just standing there next to one of the benches. We took a water break at the bench every two minutes, and he told me about some kind of anime, I think. Or video game. The kid with the mohawk helmet. It’s fucked up, he’s got problems. His mom said I was doing good with him, better than most do, but he still wasted like half an hour crying about nothing.

My kid doesn’t listen to me. He wants to kickflip but he can’t even ollie. He won’t shut up, he’s always talking to everyone else at the park, asking them how to ollie. But he only asks me how to kickflip. He’s a punk, it’s kind of sick, he only wears football jerseys, just throws his board around.

My kid’s a girl and she’s rad. She isn’t thinking about her future, she’s doing it because it’s fun now. We did kickturns all day. I vibed out the little fucker dudes who like it because they see all the dudes doing it, and want to be that, jumping down the stairs. I told her, “They don’t really like it like you do.” She doesn’t care about me at all. I should be paying her.

My kid wanted to get air, and I got him air. We cruised through the park from top to bottom, started slow, sped up, and then hit the ramp. I taught him to go off the side and lift it up. He was stoked. Then he wanted to grind. There’s that ride-on ledge. I got him grinding. He could feel it. Mom was happy, reading a book, pretending to care. His little sister chased us on a scooter. The sun was shining, everything was blue and white. It was great.

My kid’s dad made me meet him at FDR. I said I couldn’t get there because I didn’t want to go there. My phone got stolen at FDR when I was fourteen. But he picked me up and drove me. It was so weird, I sat in the back and talked with him about sports. All because he wanted his kid to drop in on vert. I drank fifteen beers last night and had to skate vert this morning. And then the kid’s dad quit the lessons for him, after the lesson. He said, ‘We aren’t sure how serious he is about it. I mean, let’s be honest, Tony Hawk didn’t have a skate coach.’ What does that even mean? He doesn’t like skating or he wants to be world champion? It’s not a college tuition. Sorry I lost one.

Ma’am, I’m sorry. It’s grip thumb. It happens. A band aid will do the trick, he’ll be fine tomorrow. I know he’s bleeding. I saw. He didn’t fall. He was just holding the board like I showed him. It’s a natural result of friction. His grip tape is supposed to be rough. That’s why grip thumb has a name. We love it because it means we had a nice day with a new board. The grip will soften over time. But ma’am, people look forward to something like this. I didn’t notice any blood on his pants, no. I put a band aid on him right away. Dish soap with salt, or hydrogen peroxide, if you have any. A toothbrush works best to, um, loosen it up. These things happen. Well look, we went over the proper way to run and jump on them today. The way a hand works, you know, as one would hold something, the thumb holds the top side of the board. Run, jump, let go. Grip thumb is a good thing, ma’am.

I think he performed really well today. A-plus, extra action. He’s finding his balance, and, you know. He’s got potential. Let him know I told you he was ripping, I think that would mean a lot.

He really seems to love it. And he’s learning faster than the other kids I teach. Would you be interested in the two-month program, then? We can lock you down, it comes with a T-shirt.

The cops love telling us there’s a skatepark, now. They love kicking us out of the real plazas and saying, “Go to the skatepark.” Millions of dollars went into this little recommendation.

The skatepark is down the hill from the art museum, next to the bike path. The river is on the other side of the bike path. It’s a busy area so they took their time making the park look like it should fit in. The trend with skateparks is to make them look like actual city plazas, with benches and things like that, that skaters are free to wax and grind and ruin. Sets of stairs we’re allowed to throw ourselves down. The thing about actual city plazas is location. This park down the hill is hidden from the world, it sucks. We need to be in the middle of everything, just like everyone else. What girl running on a bike path is going to stop and watch this shit? If we were in the middle of the city, next to a subway stop, or a Starbucks, and she worked around there, she’d have no choice. So the city spent millions to build this fake area that’s lost its luster after about six months because the location is terrible. The obstacles are… fine. I imagine it’s what a dog would say about a penned-in area with Astroturf and a little wooden thing they can climb on. “Just give me a real tree or two, dude.” Or what a kid would say about his school’s playground, in the summer. “Fuck school, are you fucking kidding. I’m not going there.”

Corporate or municipal buildings usually have a set of five stairs to go down. There’s a handbar for the people to hold, and a long bench somewhere for them to sit on. That’s why we’re at the corporate walkway. So that’s what they put at the skatepark. There are ramps and some left-field obstacles, but it’s all based on real life. Which is why it sucks.

We stretch, but it’s way less North Korea. It’s not fifty kids perfectly spaced out doing synchronized jumping jacks. Teaching them about their bodies is ten minutes of the hour. They won’t need this information for twenty-five years but the hope is maybe give them an angle outside of gym class, where they’re getting kicked in the shins.

The yoga master looks like she would rat us out if she ever got approached about her illegal business. And maybe that’s why she’s so successful. She won’t take no for an answer.

If you walk down the bike path to the overpass you can find the fishermen who usually have a joint or something. Beer. Depends on the time of day. People sleep down there. Nobody’s sleeping at the skatepark yet. But it’s a big place. We’d just avoid them.