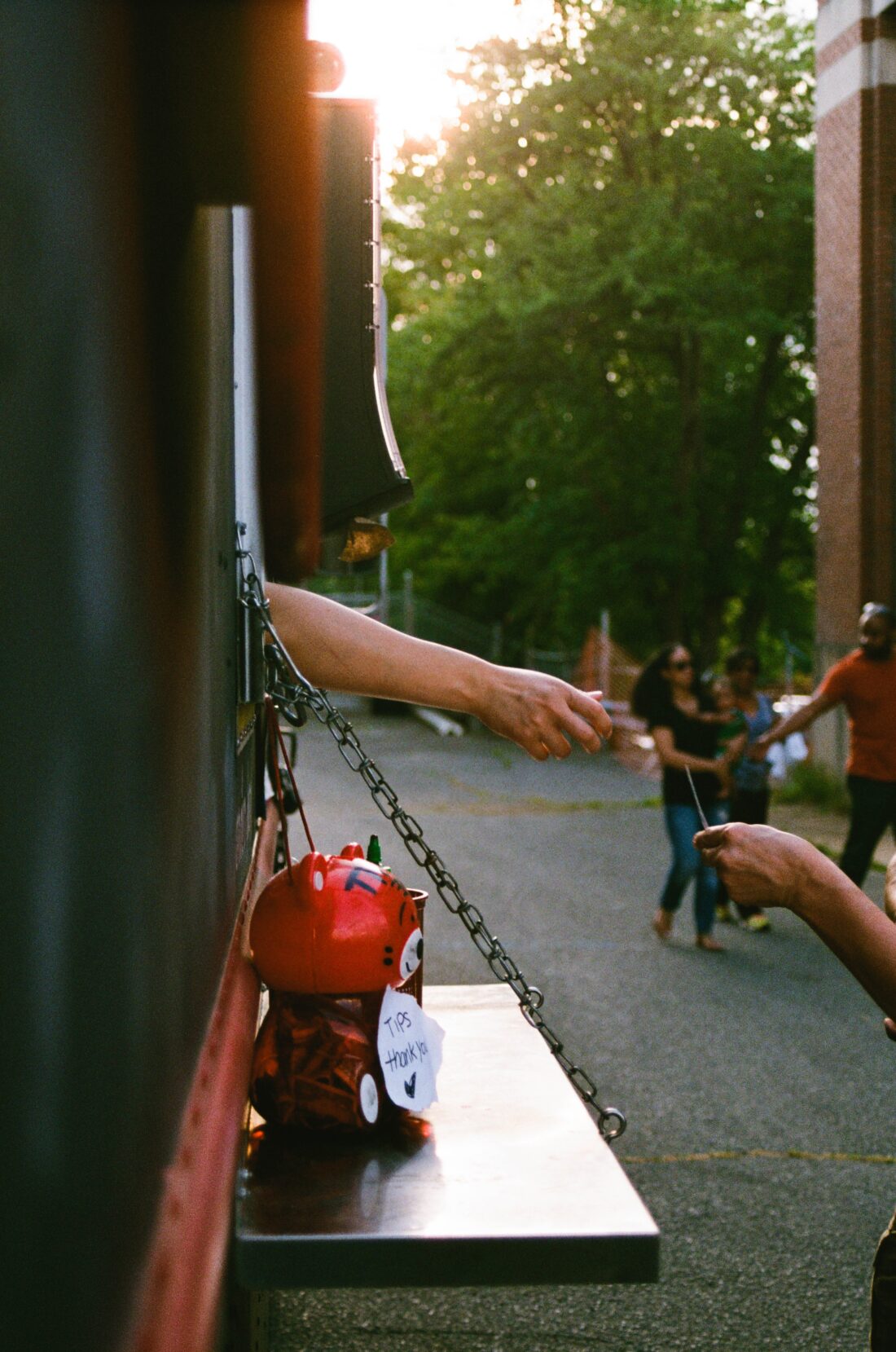 The food truck from Camacho’s Best Tacos pulled into the construction site across the street every morning around 10, wobbling like a happy drunk over ruts gouged into the dirt by cranes and forklifts and dented pickups bristling with alien-looking tools. The thick yellow lettering along the sides of Camacho’s truck was perfect, arching across a reflective silver metal that had been formed to look like a quilt.

Wings on the back of the truck flung open, and I watched as electricians, brick-layers, plumbers, forklift drivers, and all these other people formed a hi-vis green lightning bolt pointing me to steaming, styrofoam-boxed lunches carried away from this magical-looking truck.

I strolled over for a closer smell-spection but was stopped by a very loud sign that said NO TRESPASSING PER FLORIDA STATE STATUE.* (I have always been afraid of signs, always standing around, just glaring at you, telling you what you can and can’t do, where and when you can and can’t be. This is because of my father, a lifelong scoffer at signs up until he ignored one warning sign in particular, and all we had left to identify him by was what the animals highlighted in said sign didn’t eat (his leg)).

So? I went out and bought a hi-vis green teeshirt, some boots, some pants. I took notes on the workers and their walks, their gaits. I scuffed my shoes, I rolled around in the dirt in my backyard. Tried to look tired, overworked, underpaid.

I made my move the following morning, walking past the temporary fencing. I found a toolbox, and rummaged through it. Trying to look busy. Soon enough, the hum and thrum found me. It all seemed simple enough, but that was after a lot of “Hey HEY HEY! Are you trying to get yourself killed?”s that first morning.

Later, while I was on the other side of the site, Camacho’s Best Tacos must have pulled in, and I didn’t know until it was too late. I caught a glint of sun off those closing quilted silver wings and raced through the hollow building, but the women working the truck were starting it up it as I stumbled breathlessly to it. They smiled but shook their heads no as I pleaded for their Best tacos.

A sign at the gate I had come in through was facing inward, leaning towards me on a bent post: NO ONE LEAVES UNLESS SIGNED OUT BY ESL OFFICE.

(I remembered mom, looking at half a blood-spattered leg.)

The woman in the office was tough-looking, gruff-sounding, and looked at me like I was a spelling error when she couldn’t find my name on the sign-out sheet.

“Fucking HR,” she said, and asked for my license. She turned around to photocopy it, studied it. “You’re an Aries,” She said. She turned back to me, smiling. “I’m an Aries.”

The next morning Linda drove me into the lot, several of my personal items still sore from her rough hands and all-caps directions. I looked out across the street at my house.

Then someone said, “Take this.”

Then someone said, “Hold that.”

Then someone said, “Lift those.”

I got sweaty, tired. Real smudges of grease and concrete and dirt covered the fake ones on my shirt. Wait. This isn’t my original shirt: this is a new one. That’s right: the old one ripped. My boots became less heavy. I answered a few questions for the architect when he arrived on site, and hated him along with the rest of my hi-vis green team, his crisp checked button-down shirt and flawless hardhat like the uniform of a rival sports team, trying to score touchdowns against us via last minute changes to the blueprints.

Linda and I lived together, and never got around to breaking up. I loved when she told me what to do, where to be, but then she started coming home late, perfumed in Blackie’s Tavern, and would smoke in the kitchen, leaning against the wall like a post, looking at me as if she had read our astrology wrong.

We finished the apartment building, and it was dressed up in dollar signs and strings of colourful plastic flags. Linda drove us to a new site: luxury condos. I signed in, I signed out. On the third day, while I ran pallets around with the JLG, a truck honked and bobbled into the dirt lot, rattled to a stop, and opened its wings: Eat At Joes.

I remembered another silver truck, Camacho’s Best Tacos, and my house, and my life before meeting Linda and my brothers in the union.

I sat with my styrofoam container beside the exit gate, flung open to receive deliveries. There was an empty, overgrown lot across the street from the site, with a fancy advertisement hammered into its untouched grass: Lots for sale! A NEW LIFE AWAITS!

But I kept eating.

*Hugo pointed out this spelling error to me: we were shaving excess masonry from the exterior walls, and he laughed as he imagined a statue (as opposed to a statute) standing somewhere in Florida, probably of some old white dude with a name like Hortastis J Fogwhistle, caught in a pose of NO TRESPASSING. “Poor bastard probably doesn’t even know he got stuck in that position forever.”