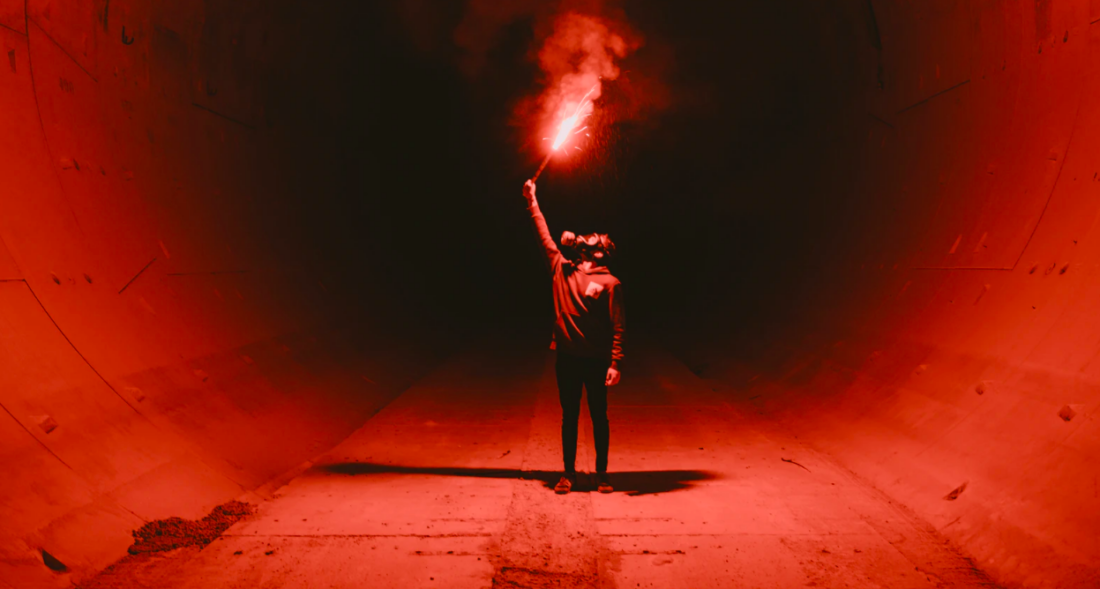 I woke up early to drive Rae to the airport. I’d gone back and forth about the Mardi Gras trip and finally decided to stay in Denver. We’d just moved into a new apartment and money was low. The sentiment was I drive so we could spend every last moment together. The reality was the traffic sucked and Rae was travel giddy.

At departures, I grabbed her bag.

“It’s Mardi Gras,” she laughed, before turning and walking inside.

By the time I got home, I had thirty minutes to kill before work. I’d taken a job delivering pizzas downtown. What concerned me was how much I enjoyed the work. What concerned Rae was how I was almost forty. Had no prospects. No skills. And no health insurance.

I smoked on the front porch. The sky held no clouds, but a frigid breeze carried the smell of snow. The apartment was in a converted mansion in Speer not far from Wash Park. There were eight units. A half dozen flowerpots hung from the porch. Whatever was in them may have once been beautiful, but surely would not bloom again.

I arrived at the shop and parked in the back. There was a dead squirrel by the gate where the driver’s entered. It looked freshly run over. Another driver, this goth guy Angel, showed up and we stood together staring at it.

Inside, Angel suggested we send the squirrel through the brick oven. This kid Zack, who was behind the line making pizzas, laughed and said, “My curiosity is outweighed only by my horror, Angel.”

The manager on duty, Aiden, a Boston guy who’d been there a decade, kept answering the phone and telling people to hold.

“What they fail to realize is I don’t give a shit if they order,” Aiden said.

Most shifts, Aiden drank PBR to the point of incoherence. He was everything I could have asked for in a daytime manager.

He retrieved a PBR from under the counter.

“What am I, a meteorologist?”

I took a dozen deliveries over lunch. High clouds inched over the peaks of the front range, but no snow fell. I left with $200 in tips and drove home to wait for the night shift.

On the interstate, I passed a beer billboard that had been changed to Mardi Gras colors.

Living in Denver never appealed to me outside of a general interest in moving west, but Rae wanted to pursue a degree in holistic medicine, so I followed.

When I got home, I smoked a joint and folded laundry. A light, but persistent snow fell outside the bedroom window. I spaced out watching it, then masturbated into a warm towel.

Pathetically, I thought of Rae.

The apartment was cold and quiet. Like no one lived there. I took a long, hot bath and eventually dozed off.

I called Rae while driving in for the night shift. Snow dropped in thick flakes. I had that disorienting feeling you get from falling asleep during the day.

A marching band played in the background.

“Sorry,” I panicked. “My phone must have called you.”

I waited for her to say something, but she hung up.

Outside the shop, the squirrel remained. Snowflakes fastened to its open eyes.

Inside, the shop was pandemonium.

“Can somebody move that fucking squirrel?” I said.

The night manager, Greg, cast me a confused glance. Greg ran a tight ship, so I wasn’t too worried about the madness I’d entered. He was ex-military and had ambitions of becoming a commercial helicopter pilot.

“This is going to be a shit show,” Greg said.

I took deliveries with no end in sight. Snow swirled sideways in wind gusts. I nearly slid into a guard rail on the bridge by Coors Field driving back from the Highlands.

In the meantime, Rae was tagged in a photo by a random guy on Facebook. They stood arm in arm, surrounded by costumed revelers, drinking Abita beers as they waited for Muses to roll. On Instagram she posted a dozen photos of parade floats. She sent one tweet: it’s Mardi Gras, bitch.

“I can’t take this,” I told Greg when I returned.

“Try one more,” Greg said, handing me a stack of boxes. “Then I’ll get you out of here.”

The delivery was to a downtown high-rise. The bomb cyclone peaked along the way. I spun out on Broadway, regained control and managed to park. I slammed the door and stood in the middle of the street. Snow landed heavy on my shoulders.

I called Rae. She didn’t answer. Muses was rolling.

Thick clouds hung so low I could only make out a few stories up on the buildings, but city light from above refracted through, brightening the street to near daytime levels.

I grabbed the pizzas. They weren’t going to make it.

Snow and wind pelted me as I walked toward the dim light of a bar’s sign in the distance. As I got closer, I heard music from inside. That 90s Brit-rock band everyone called the new Beatles. The first hit. Not the epic. I could never remember the name of that band.

I woke up hungover and checked my phone for messages. Nothing.

I smoked on the porch. The sun was bright and melting the snow. A city truck tumbled by crushing up downed tree branches.

I drove back to the shop for the lunch shift.

The snow was so thick I couldn’t tell if the squirrel was gone. I found a shovel inside and dug up the carcass. It was frozen to the point of appearing taxidermy. Legs and arms stiff. I dropped the dead squirrel by the back door and poked at it with the shovel until it stood there like a statue.