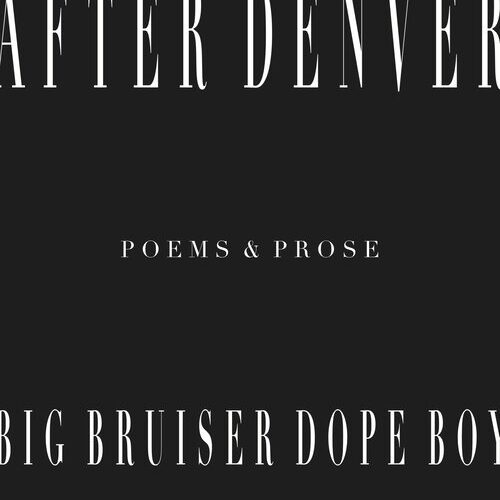 A Review of After Denver by Big Bruiser Dope Boy

I became aware of Big Bruiser Dope Boy and his poetry sometime in 2019, in the months leading up to the release of his first poetry collection, Foghorn Leghorn, from Clash Books. Immediately, Dope Boy seemed destined for as much stardom and success as a poet can have. He was the whole package. Other, more established writers whose work I enjoyed (and whose taste I trusted) promoted and praised him with enthusiasm. It was clear from his nom de plume and sexually explicit cartoon book cover that he didn’t take himself too seriously. But more than this, he was good at what he did. His work was engaging because it was at once moving and funny, and it had a perspective and voice that was purely it’s own. It didn’t try to be something else. In fact, it was what other poetry was trying to be. The only difference was that Big Bruiser Dope Boy had somehow succeeded.

I was impressed and enamored, in a way. More so when I found out that he lived in Denver, maybe half an hour or 45 minutes away from me. And he had gone to college in Boulder, where I live. He was one of us, I thought. I invited him to give a reading at Trident Booksellers and Café, the bookstore where I worked. Before he started reading, he set the alarm on his phone for 10 minutes. When the alarm went off, he stopped reading mid-poem. That was it. It was a fun night.

I saw him around a little bit, at an occasional reading in Denver maybe. An event set up by his publisher. His book got taken off of Amazon either because of the trademark infringement inherent in the title or the ejaculating cartoon penis on the cover, maybe both. It was rereleased as Your First Real Boyfriend & Other Poems. I kept meaning to ask him to come back up to Boulder, but it never happened. And then he left Colorado.

And thank god he did.

Because if he hadn’t left Denver, then there would be no After Denver.

Unlike his previous book (books?), After Denver contains both poetry and prose. The poetry picks up where Your First Real Boyfriend leaves off. When I closed the cover of the last book, I was sad it was over, so it felt comfortable and reassuring to get sucked back in by this new one. Poems like “Customer” go so far as to make reference to poems in the first collection, and they talk about the book as a physical object. This is a hard thing to do. It usually comes off sounding conceited or masturbatory, like some self-congratulating Cool Guy maneuver. Big Bruiser Dope Boy is none of these things. He pulls it off. He works in absolute sincerity, cultivating a sense of both rawness and inclusivity. It’s like he’s saying, “Here’s this great poem. I wrote it, but you’re invited. It’s your poem, too.” And you can’t help but love him for it.

The poetry’s great, but the prose is what really cradles the beating heart of After Denver. Stories like the “Slab” series (there are seven of these) and “A pick-Up Artist in the Animal Kingdom” have such a sense of immediacy to them that they are almost upsetting. The distress doesn’t come from what the characters say to each other or any specific event as it unfolds on the page. More than that, it’s an overwhelming feeling that the things Dope Boy describes in the book have happened only moments ago, or that they’re happening around you right now. Like, he’s writing as fast as he can, and he’s only one page ahead of you, the reader. You could see the scenes, be a part of them IRL, if only you could force yourself to look up from the page. But of course you can’t. You’re trying as hard as you can to catch up. Dope Boy has messed with your head. He’s permanently bent your understanding of time and space. You feel dizzy when you turn the last page and finally emerge, not because of the complexity of the writing—his style is deceptively simple—but because of level to which it affected you.