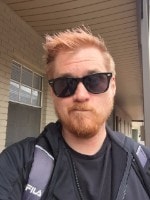 Lives and writes in Houston where he mostly dotes on his cat. To support his writing, he works a day job at a musical theatre. He is a fiction editor for Banango Street and he is also a guest editor for Issue V of Lockjaw Magazine. His work has appeared in Sonora Review, Fourteen Hills, Passages North, Fairy Tale Review, Paper Darts, and others. He has written more stories about boyfriends than he has had actual boyfriends, so he has some serious catching up to do. His short story “Bespoke” was the winner of Puerto del Sol’s 2016 Contest in Fiction. He has an undergraduate degree in theatre and creative writing from the University of Houston, and an MFA in creative writing from the University of Alabama with a concentration in football.

A MFA poet & a PhD student at Florida State University living in Tallahassee with her two wonderful cats, Julia the Mighty & Autumn the Bossy & a steady stream of foster kittens. She is the author of three chapbooks Retribution Binary (2017), wildcold, & I’ll Love You Forever & Other Temporary Valentines. She was the recipient of an AWP Intro Journals Project Award in 2014. She has poems published in Colorado Review, Sonora Review, Sycamore Review, Third Coast, Crab Fat Magazine, and others. She writes to help see & feel the world clearly, without ever giving up the fight to improve it & dismantle toxic systems. 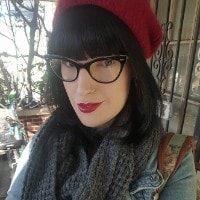 Founding editor of Quaint Magazine, the recipient of an Academy of American Poets award, the runner-up for the 2014 Judith Wright Poetry Prize, the 2015 W.B. Yeats Poetry Prize, and a pushcart nominee. From an early age she was happiest with a pen in her hand: writing, doodling, or sketching elaborate maps of imaginary landscapes. Her work has been published in The Mary Sue, The Establishment, Cordite, Permafrost, Overland, and others. She’s currently shopping a chapbook of gurlesque poetry, and is working on a full-length narrative in verse loosely based on Aileen Wuornos, satanic panic, and the Hannibal franchise. Much of her work is informed by her fascination with the slippage between fantasy and reality, dream states and the waking world and the darker side of human nature.