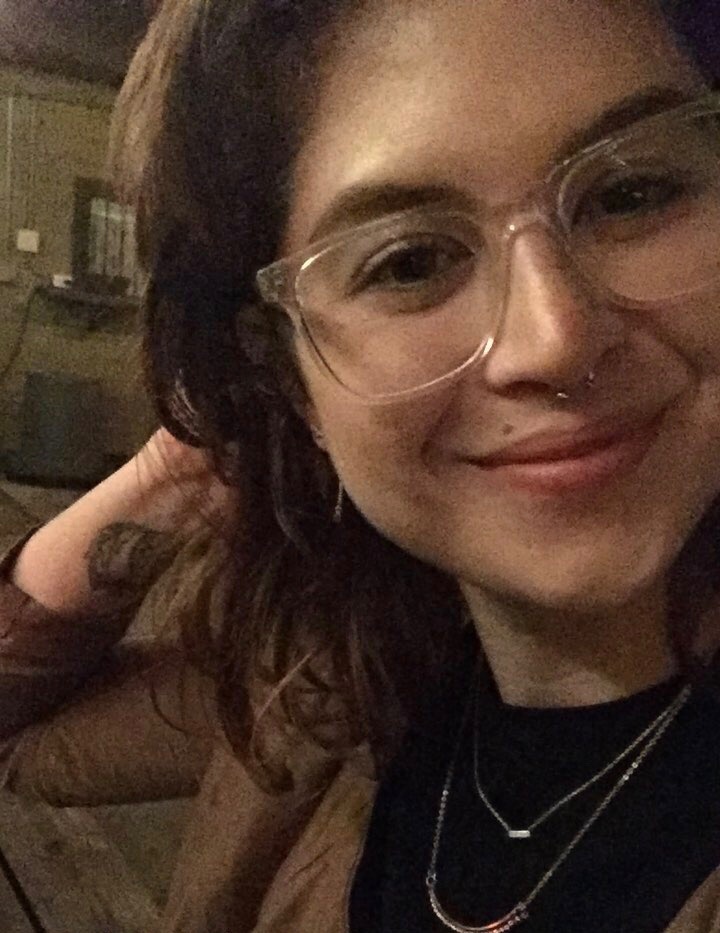 Kim Sousa is a poet and open border radical currently living in Pittsburgh, Pennsylvania with her two senior pugs. Kim was born in Goiânia, Goiás (Brazil) to an American mother and Brazilian father; she immigrated to Texas with her family in the early 90s at age five. She, her mother and her younger sister briefly lived in San Antonio, Texas while her father sought work and housing in Austin. There, they would all call its south side home for most of Kim’s life. She moved alone to Pittsburgh in the middle of its “Polar Vortex” in 2014 and has been living there since, trying to carve a home for herself in spite of its marathon cold, rainy days. Thriving in these new-to-her conditions involves many, many houseplants: tropicals for remembering Brazil and cactus for Texas. She often feels displaced and misses the sun closer to and below the equator, though she uses this displacement to connect to her own immigrant identity, as well as her father’s, and her community’s, too. It drives her poetry. Kim is grateful to Pittsburgh for its generous, shining poetry community, wherein she always feels at home and has found many dear and talented friends. Shout-out to local legends Emily-Mohn Slate, Shannon Sankey and Dan Shapiro. Kim’s pronouns are she/her and she identifies as Brazilian-American, Latinx and as a Texan—Texas forever!

For Kim, writing is a space to explore one’s preoccupations. To settle into one’s rage and one’s anxieties—to share what would otherwise be unshareable. To take up space and invite your audience to do the same. Poetry is a place where you can finally be loud, to name the thing that’s haunting you. Kim’s thesis advisor once critiqued, “You don’t have to fit every anxiety into a single poem,” and Kim likes to push back on this. Where else is there to fit them? Kim’s poems often begin on the blank side of work forms, on scrap pieces of paper or in her iPhone notes. Lately, Kim’s poetry has focused on writing out of the immigrant experience as a way to both celebrate her community and challenge the mounting hate being leveled against it. Kim’s poetry explores displacement, the borders we draw and what home means in a far-flung world, as well as the body, grief, superstitions, mysticism, police violence, the prison-industrial complex and ecojustice. Kim’s poetry is political; like Solmaz Sharif, she believes every poem is political. There is an urgency and power in this: Kim’s poems are an indictment of The State. Like her home, Kim’s poetry is decorated with Catholic iconography—which, for her, is less religion and more heritage. Her poems are written in English, though she often brings in Portuguese. This year, she made the conscious decision to stop italicizing the Portuguese in her poems—it still feels wonderfully radical.

When Kim is not at work, writing and editing poems or working on her manuscript, she enjoys taking her pugs, Brooklyn (10) and Jay (11), for hikes or city walks around the neighborhood. She also loves to cook, a love she inherited from her dad, who started working in restaurant kitchens when he first immigrated to the U.S. in the 80s. She once entertained a career as a pastry cook, herself. Kim can also be found popping into to thrift stores and estate sales; she is an avid collector of cast-aside things. In fact, the first poem she ever published, “Estate” in the Pittsburgh Post-Gazette’s Saturday Poem Series, is about estate sales:

sunday is a wedding dress
in an attic window, hung
from the molding on wire hanger:
its veil a moon or
a button in the top pane.
sunday is a sneeze you catch in a sleeve
in a stranger’s damp basement.
it’s a shoebox of gold and silver,
tarnished and impossibly tangled:
each necklace a snake hurrying
to swallow its own tail.
sunday is the hands we run out of,
the armfuls of fur and macrame and
depression glass we pull from
discounted piles and folding tables.
so much of what we carry off is lost,
like the careful row of ivory buttons
down the spine of a wedding dress.
so much of what we carry is loss.

“A moon or a button” is borrowed from “A Moon or a Button: A Collection of First Picture Ideas” by Ruth Krauss and Remy Charlip (1959)

Reading has really changed a lot for Kim: she used to fly through books when she was younger. Now, she wants to spend as much time with them, to be as selfish with them as she can. In this way, she’s been rationing out chapters of Ross Gay’s joy-filled collection of meditations, “The Book of Delights.” She didn’t think it was possible to love and appreciate Ross Gay or his work anymore, and then she heard him read from “Delights.” She just doesn’t want it to end! Kim also thinks his “Catalog of Unabashed Gratitude” should be required reading.

Kim also just finished Ocean Vuong’s incredible novel “On Earth We’re Briefly Gorgeous.” She read it everywhere: it literally came everywhere with her, like a talisman, until she’d finished it. She doesn’t remember anticipating a book launch as much as this one, and she can’t recommend it enough. Ocean deserves all the flowers! Watching him shine so brightly has really been a powerful disruption of the despair Kim feels as an immigrant in this country and under its political climate today. If Ross Gay’s work gives Kim hope because it teaches her to spend more time in gratitude, to allow for more joy, Ocean’s gives her hope in that he’s written an epic—and it’s an immigrant’s epic.

Kim is currently reading submissions for the poetry anthology of immigrant and first-generation voices she’s co-editing with the bright and brilliant Carla Sofia Ferreira and Marina Carreira—poets she connected with through Twitter. The three poets are donating 100% of the proceeds from the published PDF to RAICES (Refugee and Immigrant Center for Education and Legal Services) Texas—an aid organization for migrant families. Carla calls the project a “community garden,” and that really rings true for Kim. She is also currently participating in #31DaysofLatinxPoets through the month of July on Twitter—another kind of community garden.

Kim is currently working on building her first manuscript, and it really does feel like building. She is constantly in awe of her friends who have books or manuscripts waiting to transform into books out in the world. It’s a real labor! She is taking her time with the project, but she does publish individual poems. You can find her most recent publication, “Watching Lone Star Law During the Government Shutdown Over the Border Wall,” on Glass: a Journal of Poetry’s Poets Resist Series. Her work has appeared in Poet Lore, Rogue Agent, Blunderbuss, Apogee and elsewhere.

You can find Kim sharing poems, photos of her pugs and calls to action on Twitter @_kimdow. Her website is currently kdowsousa.wordpress.com, though a new one is under construction. (As a Capricorn, Kim almost always has many projects cooking).