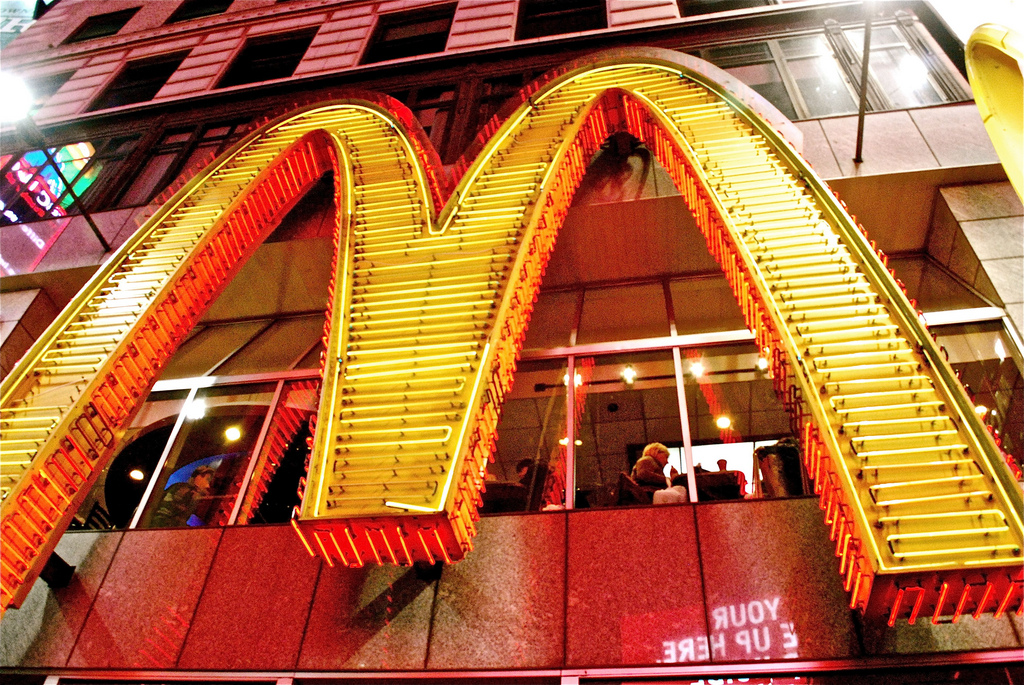 We lived in West Virginia, next to beautiful rolling hills and trees that turned every shade of red, yellow, and orange in the fall. Our house, which was all white and looked like something out of a Norman Rockwell painting, was up on a hill looking out over I-77, where all the passing cars could see it. In the summer, when I was bored, I would sit out on the lawn and try to count the cars as they went by, to imagine where the drivers had come from and where they were heading, but I’d always lose track before lunch.

One day, a man in a suit came to our front door. He said he worked at the McDonald’s head office. In my youthful imagination, I pictured a giant McDonald’s restaurant like the one in town, with golden arches the size of skyscrapers. I later learned that it was just a drab gray building like all other office buildings.

I’d only been to McDonald’s once before, because Momma and Daddy said eating out was too expensive. My uncle had taken me for my fifth birthday. I got a happy meal, which came in a box with a weird wallet/watch toy. I thought it was the best place on Earth, so when the man in the suit came to our door, claiming to be a representative of Ronald McDonald himself, naturally I was excited.

He asked if he could come in, claiming to have an interesting proposition for us.

“What kind of proposition?” Daddy said.

“A business proposition,” the man in the suit said, with a big smile on his face that indeed reminded me of the company’s clown mascot.

“Well, perhaps you’ll change your mind when you hear what we have to offer.”

But Daddy had already shut the door in his face.

A few weeks later the man in the suit returned, bearing gifts for the family: a Ronald McDonald doll for me, and red McDonald’s hats for Momma and Daddy. It was then that we learned that they wanted to use our house as a billboard.

“Think about it,” the man in the suit said, staring off to the side and gesturing with his hands in front of his face as if he were picturing something. “Your house could be The McDonald’s House.”

“Now why in the hell would I want that?” Daddy said, before slamming the door in the man’s face once again and repeating, “Not interested.”

The last time the man in the suit came to the door, about a week later, he didn’t bring gifts, and he wasn’t smiling. “Now listen here,” he said, as soon as Daddy had opened the door. “What I’m offering you is—“

But Daddy wouldn’t even let him finish his sentence. “Not. Goddamn. Interested. What about that don’t you understand?”

A month later a different man in a suit showed up. His suit looked more expensive than the first man’s, and he had an even broader smile.

“Good afternoon,” he said, tipping his cap as Daddy answered the door. “I understand you’ve spoken to my colleague. I’m here to—”

“Y’all are wasting your time,” Daddy cut him off. “I ain’t interested. And I ain’t never gonna be interested.”

For months they continued to come. One man in a suit after another. Sometimes in pairs. Daddy put up signs along the driveway that read, “NOT INTERESTED,” but they kept coming, offering more and more money to use our house as their billboard. One day Momma finally asked why they were so persistent. “Hell, you can afford every billboard in the country,” she said. “Why do you want our house so bad?”

The man in the suit on that particular day explained, with surprising candor, that it was a new marketing tactic called associative advertising, “integrating advertisements straight into American life.”

“You see,” the man in the suit continued with passion in his voice, “when folks look at a billboard, all they see is an advertisement for a product. Naturally, they’re skeptical. But when they see a real American house like yours with the McDonald’s logo on it, they’ll see Americana.” He further explained that they were going after average American houses, buildings, and landmarks throughout the country. Barns, post offices, corner stores. Even churches. “We’re working on getting our name on the world’s biggest ball of twine out in Cawker City, Kansas.”

“But why our house?” Momma said.

“Aside from the fact that it overlooks one of the busiest highways in the country, where hundreds of cars pass by each day? Because your house is the classic American house.”

“Still, there have to be thousands of houses in this area alone that look just like ours.”

“Exactly! Your house is exceptionally average, and I do mean that in a good way. Your house is the American house, and we want to make it the McDonald’s house.”

“Well can’t you at least give me a reason?” the man in the suit said, starting to get frustrated. “Maybe there’s something else we can offer you.”

But “not interested” was reason enough for Daddy. We lived a simple life, and we liked it that way. Daddy had worked for over two decades in the mines to be able to afford the land, and he built the house from the ground up, taking special care to paint it a fresh coat of white each summer. He didn’t care about money or possessions. All he cared about was the house. Those men in the suits might as well have been offering him all the money in the world. He was never going to let them put a giant fast food advertisement over his life’s work.

Still, the men in the suits kept coming, but less and less over time, until finally they stopped altogether. More than a year went by without a visit, and then one day Daddy started coughing up blood, and the doctor from the big hospital in the city told us that he had lung cancer from working in the mine all those years. After medical and funeral expenses, Momma and I had hardly any money left.

As if summoned by the news, about a week after Daddy died, a man in a black suit showed up at the door, holding his hat in his hands while offering his condolences.

The sign went up overnight, covering the entire side of the building in red and yellow paint, including my bedroom:

The “0” from “50” went right over my window, and during the day, when the sun hit the side of our house and cast a shadow in my room, it looked as though the sign was calling me a big nothing.

Momma didn’t want to do it, but she didn’t have any other choice. We needed the money, and she had never worked a day in her life. Plus I was only ten years old at the time.

So I went through life with a giant McDonald’s sign literally hanging over my head. The other kids teased me at school, calling me Ronda McDonald and saying that I had personally “served” billions of “happy customers,” which I didn’t understand at the time but later learned was a sexual innuendo. Sometimes they would even show up at the house and yell out food orders as if it were a drive-thru.

“I’ll have a hamburger with fries,” I’d hear them calling out while others snickered on the front lawn. “Hold the onions. Oh, and a chocolate shake.”

I didn’t blame Momma for it. I knew she was only doing what she had to do, that the sign was keeping a roof over our heads and putting food on the table. So I did my best to ignore it and live a normal life.

I had my thirteenth birthday on the lawn right under the McDonald’s sign.

I posed for prom photos in front of the McDonald’s sign, standing under the first arch.

I lost my virginity right behind the McDonald’s sign, staring at the shadow of the “0” on the wall as Tommy Delaney writhed on top of me.

But it wasn’t always easy to ignore. Try as I might, it didn’t feel like home anymore. It felt like we were living inside a billboard. And in time our house became a sort of roadside attraction. 1-77 travellers would pull over and take pictures standing in front of the giant sign. Momma tried to make the most out of the situation by charging for admission and setting up a booth to sell homemade postcards, but most people just ignored her, quickly took their own pictures, and left without paying. Some nights I’d be lying in bed and a bright flash from a camera would light up my room.

Every few months a paint crew would come and freshen up the sign. As I got older the slogan changed from “50 BILLION SERVED” to “65 BILLION” to “80 BILLION.” By the time I’d moved out, they had changed it to “OVER 99 BILLION SERVED” and kept it that way.

I would come home to visit Momma from time to time, and there it would be:

The only person I ever brought with me was my college boyfriend, Barry. I was nervous for him to see the sign. I thought he’d take one look at it and run away, but he assured me that he didn’t care. “Besides,” he said, “who doesn’t love McDonald’s.” I knew right then and there that I would marry him.

Eventually, without warning, McDonald’s stopped paying Momma to use the house. Six months went by without a single check with the golden arches watermark on it. She tried calling to get an explanation, but she could never get through to anyone, so one day she and I drove all the way down to the head office in Illinois, a more than 10-hour trip.

When we got there, we waited in the lobby for over three hours until someone finally came down to talk to us. It was another man in a suit, but one who we had never seen before. He told us that he was sorry, but that they could no longer pay to use our house. With tears in her eyes, Momma pleaded with the man in the suit, explaining that without the money from the sign she would have to sell the house, that her husband had built it from the ground up with his bare hands with the money from the job that had killed him, but all he would say was, “Sorry. There’s nothing we can do for you.”

Momma lived in the house a little longer. She couldn’t afford to paint over the sign, so it stayed up, growing fainter and fainter with each passing day, until she had no choice but to sell. I begged her to come live with Barry and me, but she was too proud, so she moved into a trailer, deep into the mountains and far away from the house, for the remaining years of her life.

For more than a decade I avoided that house, out of fear that it would bring back all those bad memories, until one day, when Barry and I were driving down the I-77 to Florida. I didn’t recognize it at first. The new owners had painted the whole house blue, but the paint had started to fade and the McDonald’s sign was beginning to show through. A single faint arch, like a golden rainbow peaking out of a blue sky.

I told Barry to just keep driving, but he insisted that we pull over. As I stared up at the little house on the hill, I tried to imagine what others must have seen when they drove by years ago. I couldn’t remember what it had looked like before the sign went up.

Stranger I Once Was