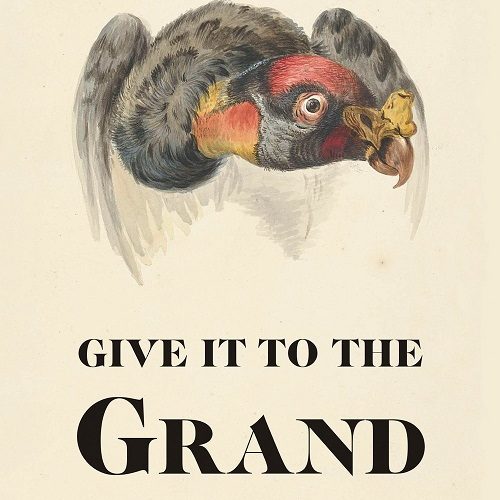 The Death of Nihilism: A review of Noah Cicero’s GIVE IT TO THE GRAND CANYON

Ah, the Grand Canyon. Purveyor of crushed dreams and desperation, overseer of Vegas excess and western stoicism, keeper of our nation’s hopes and secrets.

The mysteries of what the Canyon is truly about are the same mysteries Americans involve themselves with at any given time. From retrospectively horrific westward expansion during the beginnings of America to the often-false stories of liberation and “going West” narratives that Twain famously inaugurated, the Canyon in literature has always slid between what we as Americans impute onto ourselves and what we as Americans impute onto the world. As such, writers nowadays have avoided it like the plague, and wisely I think, as if it were a bottomless pit of cliché from which any sort of narrative would never escape wholly intact.

Enter Noah Cicero, a sort of fearless hero of transgression going against this unspoken pact between writers and the Canyon, to treat it with the respect that is its due by not writing about it. Into such fraught literary territory, Cicero manages to insert his voice, a voice that shouts into the Canyon perhaps only because it is a voice that is so gloriously understated that either the imposing Canyon won’t hear the shout, or because the Canyon recognizes and appreciates the transgression itself. And it is that voice that rings throughout Give It to the Grand Canyon and enables whatever singing can still be sung about that site to be sung with a strange vigor.

The short novel is narrated by Billy Cox, and if that doesn’t give you an indication that this will be an everyman, I don’t know what will. It might be the job he gets at the Grand Canyon (dishwasher), or the trials he faces (getting fired, social anxiety), or the cast of characters he meets along the way. Whatever lets you know, it will be apparent from the opening section, a section that, given Cicero’s track record of fast-scrolling, understated irony, comes across as both a breath of fresh air and extremely earnest. For once, Cicero is not talking past the reader but is meeting them on their own terms, in a style that defies characterization if only because his previous work tried to characterize too much. Where there was once a time in Cicero’s work where you knew everybody’s motives at all times, at all points, and from all angles, here the characters have no motivations save what the confused narrator imputes onto them. And this murkiness of human intention is a very welcome intrusion into Cicero’s signature, shoot-first-ask-questions-later style.

The episodic, self-contained narratives within the chapters of the novel progress lyrically towards the close, but each episode has a narrative and structural transience that suits the many characters that filter in and out of the story, like what one would find at a state university or a commuter town, with people filtering in and out of one’s societal vision, content on remaining in the same place for just a moment longer, to either take in the view or stop before continuing on to somewhere else.

The scene setting of the novel’s episodes builds to a crescendo in the form of a monologue of unfiltered (and unsolicited) advice delivered from a 50-something-year-old to the narrator, immediately after nature had confirmed all of the older man’s words in its own unifying way. What’s important for the narrative is that the narrator didn’t need to hear it at that moment, and the way it’s written reflects that, with the narrator politely excusing himself after the spiel. What’s important for both the reader and the story structurally, is that the man’s words are both unimportant and vital, immediately insignificant and reflexively necessary. Up to this point, the narrator has been careful to out himself as a no-good, dirty, and vaguely narcissistic nihilist. But just like the reader by this point in the novel, the man singles the narrator out for this outrageously lengthy advice and calls him out for what he is: someone who cares deeply about things; about the state of the environment, the state of the world, how people interact and communicate with one another, how to achieve individual and collective slices of peace in this world, and how to spiritually engage with the world without any sort of religious trappings getting involved. For all the nihilistic protestations of the narrator, it becomes clear that the only thing he doesn’t care about is becoming the sort of person who doesn’t care about anything. This ethical self-work becomes the novel’s guiding force, attendant with its prose.

The prose is sparse as hell, and almost revels in how plainspoken it is, letting it speak so much for itself that the narrative becomes suspect in several places. It is realism writ so small that the lack of maximalism becomes its own sort of larger statement. The workers at the Canyon, at all National Parks really, have a liveliness separate from the larger narrative framework and stylings they’re placed within, much like real people have their own rich interior lives independent of this thing we call late capitalism. Cicero’s work has always filled the lives of those who are down-and-out with rich colorings, but the difference here is that those shades of color are now fuzzier, more washed-out, and less easy to define based on the style employed. A consistent irony on the level of the prose itself is that there have never been more “verbs of being” (is, was, were, are, etc.) in a Cicero novel, but there has also never been less of a reason to employ them.

The transgression against unspoken Literary Rules (what to write about, how to write about it, what would work in an academic setting, etc.) reminds me of one of my absolute favorite writers: Roberto Bolaño. And it’s not a stretch to say that politically, the same concerns tear at the seams of both writers’ works. Bolano saw the rise of fascistic sentiment in Europe, Latin America, and the United States with a disturbing prescience, and his rejection of the canonical rules of writing was a spirited rejection of everything that was bolstering any sort of fascism, at least aesthetically.

Jennifer Egan is another favorite writer of mine that comes to mind when reading Cicero’s book. In Egan’s novel A Visit from the Goon Squad, there are staggeringly piercing moments of realist clarity that break through the narrative the book establishes. Cicero’s book is like those moments, but only those moments, i.e. a sustained clip of those moments, smashed together, unholy in their symbiosis and screaming out for some sort of narrative closure to help out. Which, however unsatisfying that will be to some readers, feels extremely true to life and is much more disturbing upon reflection, a reflection that this book provides more than previous Cicero works.

The current administration thinks it’s just and fair to let the land rot on our own accord, and to let our understanding of the land remain in a stasis of our own making. Cicero wants us to recognize that this land is under threat not from an ambiguous stasis, but from one that can be identified and labelled, like a tracked animal. As cuts are made to federal land-saving programs, and as the environment is under consistent larger ecological threat, Cicero implies that the cuts to maximalist bullshit with respect to nature writing must be kept, yes, but also examined thoroughly.

Some readers will find a sort of purgatorial torpor within the contents of the book, as if its restraint were against them, the reader, and not against the unseen forces the characters in the book (or the author) are railing against. They will get bored and wonder why their hellish existence is being prolonged. But this book is not for them – it is for those readers who will find a confirmation of a heavenly struggle against the stasis of this world, aided by what is both most permanent of all and most being threatened by climate change. For those readers, it will be a heaven no less important for being more familiar, more real than bliss, and more uncanny than the Canyon.