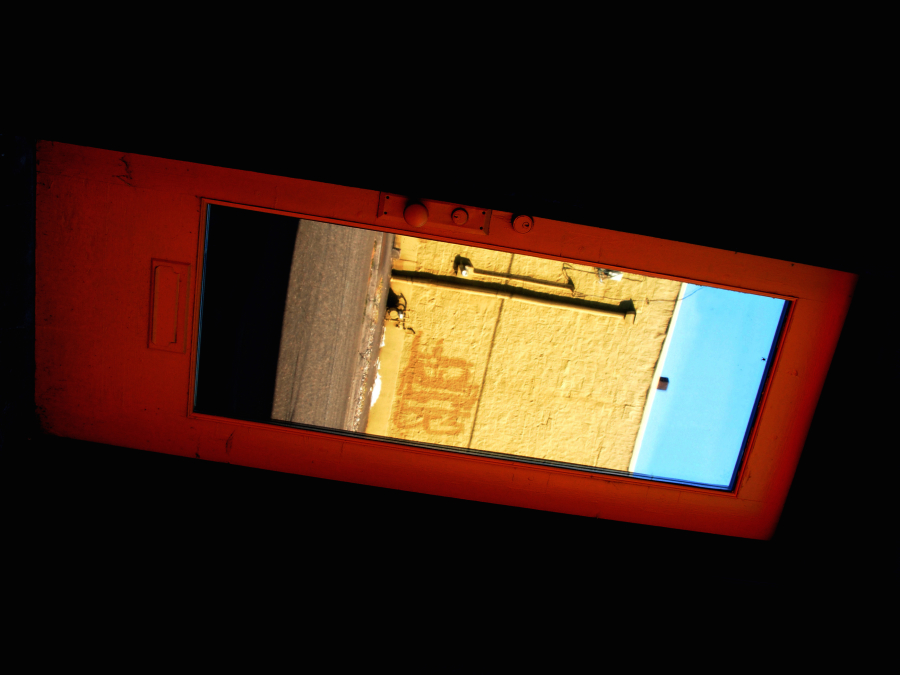 She crawled into the mirror last week. When the pills failed to carve the darkness from her mind, her ache cocooned itself within a prism of reflected shadows.

The house is quiet, the drone of the television the only human noise. Other sounds, once dormant, are foreign to me now, a strange cacophony of revived echoes: the rattle of a skillet when I pull it from the cupboard; the hum of the refrigerator as its engine puts in an overnight shift of keeping deli meats from perishing; the soprano squeak from the faucet handle when I fill the coffee pot with cold water. When I scratch my thigh, it’s like a manic cat clawing an aluminum pole, an explosion of lonely friction.

Sex with glass is nothing more than horizontal desperation. A couple of counter-clockwise turns with a screwdriver and she’s unhinged and in our bed. I fog the mirror as I thrust and lick my own face hoping she appreciates the effort. When I climax, I like to believe she does too, that her melancholic moans are bouncing around inside her fragile sanctuary. That being spent from pleasurable exhaustion, she craves a Marlboro Light and a sip of her beloved sweet tea. But there’s no dialogue when the woman you love is taking a respite within an inanimate object. A trapped silhouette is not a loquacious creature.

I speak to her when I clean the mirror. I tell her what I had for lunch, what chips accompanied my sandwich. It’s always the ruffled kind, barbecue, but she knows that as she always did all of the shopping. When the polishing is finished, I assume she can see me in all my pathetic splendor. That she’ll notice the sideburns and her obscured face morphs into an elegant twist of playful disdain. Before extinguishing the lights, I use a tube of raspberry lipstick and scrawl goodnight in a trembling script.

The ramifications of shattering the glass aren’t clear. There is no rulebook for freeing someone encased in a mirrored tomb. I’m not sure if a blow from a hammer or a lonely fist will be like a prison break or if it will just fracture her tenuous existence. Maybe if she knows that I will be more supportive, she’ll reappear on her own. If I don’t dismiss her dark illness as if it’s some trivial nuisance. Or if I stop using lovemaking as a frenzied dose of serotonin, a bludgeoning of the sadness with robotic movements. I could offer to rub her feet without being prodded and listen intently when she’s spiraling into the void.

Once, I attempted to crawl inside and join her. I sought her charming laugh, her feline movement, her aroma of sandalwood and mint toothpaste. But I failed. Maybe I wasn’t sad enough. Or she simply refused to let me inhabit her hushed paradise. I’ll continue to wait for her with the hope it’s happiness that eventually emerges instead of Ophelia draped in her fossilized shroud.

Chris Milam lives in solitude in Hamilton, Ohio. He is a voracious reader, a baseball junkie, and a consumer of sweetened coffee. When not writing, he can be found staring into the abyss of nothingness. His stories have appeared in Firewords Quarterly, the Molotov Cocktail, Dogzplot, Unbroken and elsewhere. He’s a proud member of the #Flashdogs pack and you can find him on Twitter @Blukris.