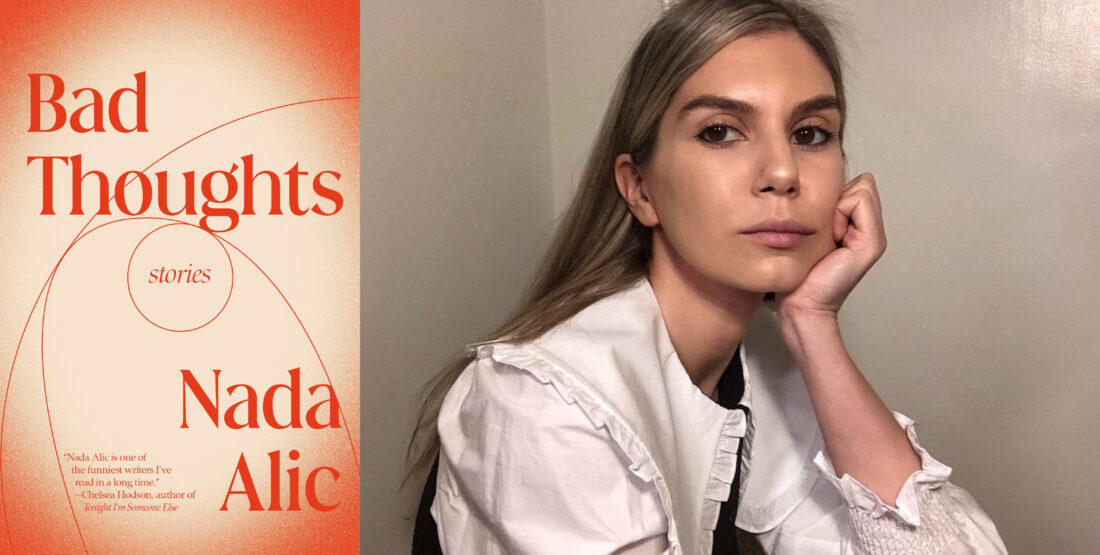 We all have bad thoughts sometimes and Nada Alic somehow manages to fit as many deviant thoughts she can think of in this enchanting debut collection of stories.

The women that Alic conjures in these stories grapple with their shared inability to cope in a modern world that is both bleak and unending. Though they each thrive in their own fucked up ways, Alic finds the “bad” in all of them. The notion of which, however, is actually something closer to genuine truth than negative qualities. The idea of what makes their thoughts “bad” is the thing that Nada Alic, playfully puts on trial in this book.

These stories are made up of imperfect people grasping for perfect connections and experiences. A shared fantasy that we can all relate to. Unable to find such scenarios though in real life though, Alic whimsically has these people retreat into themselves for such needs. They get stuck in loops, daydreaming about break-ins and The Bachelor. Anything really to jolt them out of the sense of tedium of their average lives. All equally seeming more interested in simulating a life rather than living one. It’s a look inside the window of your average 21st century American and every 21st century American in Bad Thoughts is blissfully unaware of the problems outside their own windows. Only in the stories like “Tug, Spin Release” and “Giving up” do we really get a sense that they ponder how people other than themselves suffer.

At this point, it should be stated that none of these strange and irksome qualities cause the book to lack substance or meaning. In fact, it is all these things that make it so delightful and realistic. Alic is toying with an idea of alienation that isn’t new to the literary world. Writers like Miranda July have made entire careers shining a light on grotesque aspects of the human condition and lightheartedly turning them into something we can empathize with. The difference here though is that Miranda July panders more toward an audience that finds our current digital landscape as an obstacle that must be overcome so we can actually communicate with each other. Nada Alic does not. The generational divide here is clear.

Miranda July came of age before social media was even a thing. It wasn’t the norm. In Nada Alic’s life, it is. Because of this actuality, her characters wish to harness the different forms of communications that they have swirling around them to access that sense of belonging. Smartphones, social media, and even podcasts act as keys to the outside world for them. Closeness can even be felt through them as some lines imply. Is this a critique of our addiction to social media and our inability to stop scrolling through it for even a microsecond? Yes. Is there a sense that the world could probably be calmer without it? Probably. Can a single character truly thrive without it? No.

Nada Alic is equal parts outlandish and realistic at all times throughout this dazzling debut. She hits technology in humorously poetic ways yet never is dismissive of it. Instead, she is dismissive of people and the culture that we currently live in. Every story has at least one vapid and narcissistic moment. None of which seem to have anything to blame except for the character themselves. At points it may seem like these moments meshed together are just one delicately veiled sketch of the Nada, I implore you to look deeper. The characters are you. And the fucked up weird things that make them who they are, are just the things you hope people don’t notice about you. But we do. Because all of the fucked up and weird things are what make us bad and we all have bad thoughts sometimes…

Preorder a copy of Bad Thoughts from Penguin Random House, Bookshop.org, and Amazon.