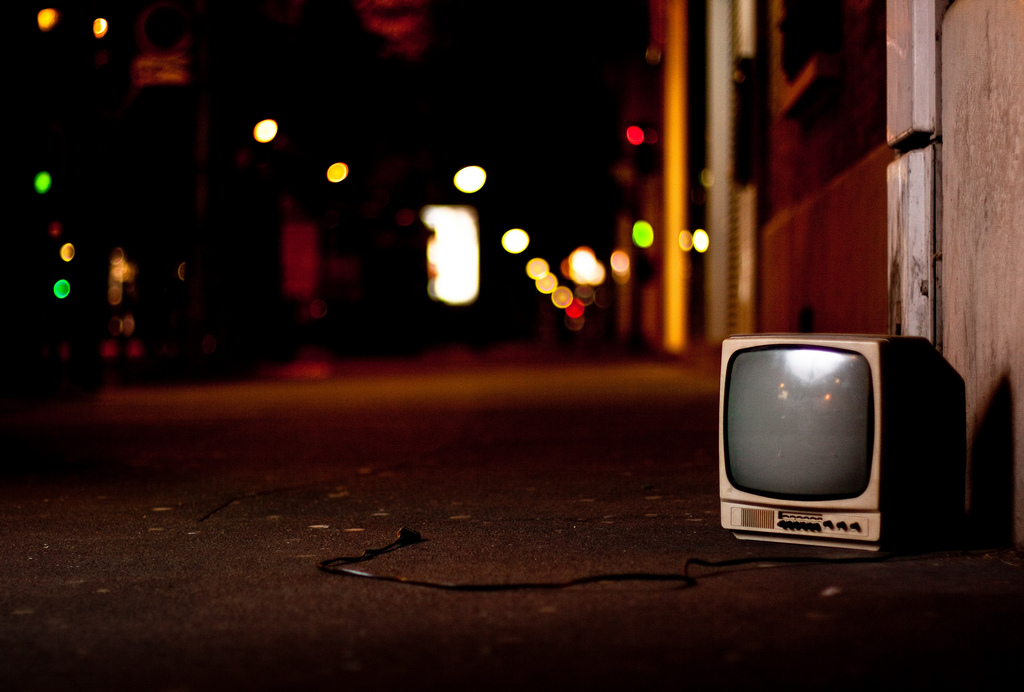 “Seriously? Watching the final episode of David the fucking Gnome, that dumb cartoon, was the most defining moment of your childhood?”

“Hell yes,” Marc said, ashing his cigarette off the roof.

Sara finished her beer, tossed the can onto the pile of empties scattered inside the truck bed below. A mass grave of aluminum and inhibitions. “Explain yourself.”

Marc scratched at the blotchy, faded tattoo of a skull vomiting blood on his forearm. “Show was about these cute rosy-cheeked little gnomes and a fox. Wait, I even remember the song.”

He stood and sang a few lines, making power firsts in the air, then fell forward and slipped down the grainy shingles. He pictured tumbling onto the concrete driveway and dying under that bright-ass moon hanging over them. He shimmied back to his spot.

“Anyway, it was comfort food for me. Some creepy shit happened, but it was all pretty benign. Until that last episode, when the two main gnomes and their little gnome pal climb a mountain and die. The fox is with them too, but it has no idea what’s about to happen. Pretty sure its name was Swift.”

“Does the fox eat them or something?”

“No, Swift doesn’t eat them. What? They just start crying and saying goodbye while Swift whimpers and this sad music starts playing. As a kid, I’m like ‘What’re these little rascals up to?’ Then, the two main gnomes hug one last time and boom, they become trees. The camera zooms up to the lady gnome’s heart, which turns into a goddamn apple.”

Sara stared at the sky, beer between her thumb and pointer finger. “That’s some Ingmar Bergman shit.”

Marc flicked his cigarette down into the truck bed, feeling accomplished when it slipped right through the opening of a can. He pictured the butt screaming as it settled into a puddle of backwash. Just shut up and die, he thought.

Sara handed him one. “What happens next?”

“They turn into dancing ghosts. Their little pal dies, too, but he’s not shown as a ghost at all. Straight gnome to tree. Swift is losing his mind. I’m freaking out with Swift. I’m watching this and feeling like the world is ending. Feeling like this is some crazy joke. Feeling like I should do something because I’m dying too. My mom’s laughing her ass off. She was on a lot of pain meds at that point. After the gnomes kick the bucket, Swift howls a few times and then takes off. He comes across another fox with some other gnome riding her. The foxes check each other out, and the gnome is like, ‘Yeah, I love this, let’s make it happen’ and Swift just walks off with them, and that’s it.”

Marc snorted, spit into the gutter.

Down below, a dog started barking. Sara leaned forward.

Benny was the neighbor’s dog who liked to piss on her tires. He walked in a few circles, pissed on the front left tire of Sara’s truck.

“Asshole,” Sara yelled, throwing a full beer can at him. It missed and exploded on the street.

Things got quiet. Marc eyed a tree branch that hung over Sara’s truck. He pictured the roots of the tree as twitching zombie fingers reaching for them. “Imagine all trees are just dead gnomes?”

“Imagine all the dead people under us right now? I bet there are at least a few.”

“My mom died a few weeks after I saw that last episode. I watched her rot away. Her skin got all dry and scabby and gnarled. I’ve always pictured going to the cemetery one day and seeing a giant tree growing out of her grave. Some creepy tree with black leaves and greasy, tarry bark. Oblivion manifested. That’s why I never visit her. Anyway, just like Swift, my dad moved on. Remarried. Seems fine.”

“I’m sure she would have wanted it that way.”

Sara inched closer to Marc. She put her around him, leaned her head on his shoulder. He poured beer into his mouth and dropped the can. It rolled off the roof. He swished the bitter liquid between his teeth while Sara’s hand guided his lips to hers. He thought about the cigarette butt and he felt like the cigarette butt and then he was drowning at the bottom of a can. Sara’s lips pressed against his. He wanted to scream for help. He wanted to shoot off into space. Just shut up and die. He spit beer into Sara’s mouth, her face, her hair. She reeled backwards and so did he, shoved by some invisible force that sent him tumbling down the roof, limp and stupid. He shoved a knee in the gutter. It creaked, but held firm. Dirty rainwater bled through his jeans. He lay sideways on his back, frozen in time under that bright-ass moon. He wondered if Sara was frozen too, because she didn’t say a word. Didn’t make a single sound.