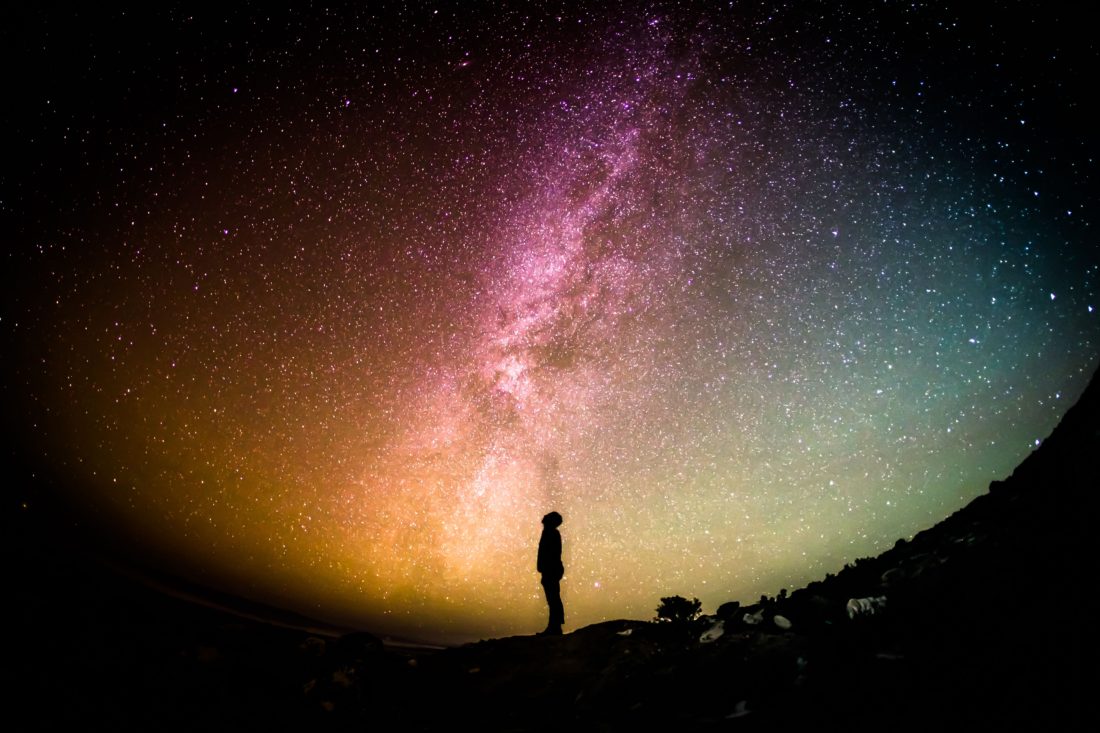 We are tracking the ISS across the sky tonight,
watching it coruscate brighter than the stars or
Mars, which glows like a bat over Scorpius,
stepping on its tail. Down on our planet, a dewy
ozone coat shields us from the UV rays. If an
astronaut spent just one minute in space without a
suit, first they’d balloon, then die of asphyxiation.
When they return from their spacewalks tired and
smelling like burnt steak, we still call them lucky.
Christ said the water he offered would quench
our thirst. Now, every breath I take is mixed
with the moisture from the words he said.
Recycling is the economy’s response to what we
yearn for: to share ourselves, to live forever.
Above us floats the communion of our age—
astronauts transmuting sweat and urine
into water and oxygen to survive without the
Earth. Their home is another moon in orbit.
Tonight, when they look out of their station
window, we are the veil the sun pushes through—
our bloodshot, stained glass atmosphere
smearing rouge on the true moon’s face.
Occulting the bloom of the flesh-red horse
chestnuts, the mouse-eared bats that chirp and
dart into their inflorescent crowns, hunting.

Astronomer Copernicus, or Conversations with God
—after Jan Matejko

Copernicus knew that God hadn’t abandoned
us, that the sun had never sunk from its
horizon. We’d rotated away like every
planet, but everything that rotates returns
elliptical, we just hadn’t realized our revolution
as a resurrection yet. Copernicus understood that
reading the skies takes time. Night after night from
his cathedral’s tower, he measured the spheres’
smooth movements, found the source of them
was the sun. An answer frank and unfindable
amidst the host of obvious stars. Copernicus isn’t
kneeling in astonishment, but in devotion—he
knows worship isn’t an event, but a gradual
obedience, a submission of the will to the law of
gravity. After thirty years of calculating the
triquetrum’s descent, he’s knighted for his
vision by the sun. At last, Copernicus’s arms
sweep across the canvas to embrace the world
like Christ. When Jan Matejko painted cathedral
ceilings blue with gold stars adorning, he imagined
Poles looking up from their occupied earth to take
in the heaven’s silence, his every brushstroke
reaching for the light Copernicus turned us toward.

Giordano Bruno and the AQI

The AQI says children shouldn’t run
after the pigeons in the town square, but
they run anyway, coughing up laughter as
birds flap in grey and teal to the rooftops.
The sun hangs like a dim lamp, warming
the air I suck in through my smog mask.
When the air was purer, Giordano Bruno
read banned books during the day, and spent
clear nights dreaming of a universe where our
world was just one bead on a thread in
the Laniakea Supercluster. Each gulp of
air an astronaut takes costs thousands of
dollars to compress into a tank and launch
spaceward. Only on Earth can we breathe
without having to train or pay for it. The AQI
says builders shouldn’t top aging Soviet
blocks with cornices, but we can’t help
gifting the buildings their classical due—
we wouldn’t have the cathedrals look lonely,
their spires’ tips already hidden in the ashy haze.
Smog is the world trying to earn a living,
to warm their rooms like I am. In Bruno’s
time, most heretics had a bag of gunpowder
tied around their necks as a last grace, but they
usually suffocated from the clouds of smoke
before the flames managed to immerse them.
Bruno was burnt at the stake for believing in
planets we’d find later. Rising up, his particulate
matter must have grayed the skies for a moment,
a brief and dark confetti no one celebrated.

Language is wiser than the mind of any one of us, just as the body is wiser than the discernment of any of its units as it moves, self-aware and many-faceted, through the current of the life process.
— Stanisław Lem, His Master’s Voice

When we speak, we are responding to
the echo of that other world. Continually
rippling in the light bloomed from the natal
bright of that realm from which we receive
strange inspiration, these messages
that grip us like twine, guiding muses
as we voyage sightless. Revealing
the dark is the nature of light and that light
bends to what surrounds it. Our solar system
travels in a vortex around the maelstrom
of our galaxy, a mirror of the double helix of
our DNA. A gravity well stills inside us,
pulling the stars in, breaking and fusing
to form code. The syntax of nucleotides
builds the life that speaks of life. What we are
looking for is a unified theory, a necessary
angel to balance the physics of the very big
with the physics of the very small, a language
neither stars nor atoms will hear without us.
We say we are looking for beauty, for
simplicity and elegance in the equation.
How marvelous to almost know exactly what
you mean when you say funeral or I say
ship. How daunting it is to say anything
about love or God with precision. But say it
simply and angels dance on the head of a pin.
Whatever binds the heavens to the atoms
will be revealed by these bodies they built—
vessels speaking alien words, clay and sight.

We drove across the desert to watch the sun,
forced out by a splinter, beam a ballpoint shadow
on these toothpaste swirled hills of shale
and siltstone, lavender and red rock
scored with runes. The people who left
them left before anyone else came along, and now
no one can read them. We speculate the way we dream
a future, tightening the twine of our bodies
each night, folding over one another
as the meaning disappears in a brief light
of being. Origen said that the darkness
at Christ’s death wasn’t magic, but the moon
in its transit— that the Songs of Solomon
are the natural rapture of God for his people.
It is foolish to see in the heavens a sign, yet what
is it but a natural theology to know that the sun
could fit sixty-four million moons inside it
and still be devoured by the jaguar speck of one
black pupil. This mesa is strewn with kaleidoscope:
petrified logs reel the deep past within each
sequential spiral— the everted turns of
when the moon was a few fingernail
lengths closer to the Earth, when a darker
eclipse rose over a Triassic forest
and dinosaurs roamed blind to the diamond
ring of the sun cresting the waning moon.
What was hidden in the eclipse had to wait
until Einstein theorized that the moon’s gravity
bent the sun’s light, that the center was the weight
between bodies curling the space around them,
that our bodies are, sometimes, the center.