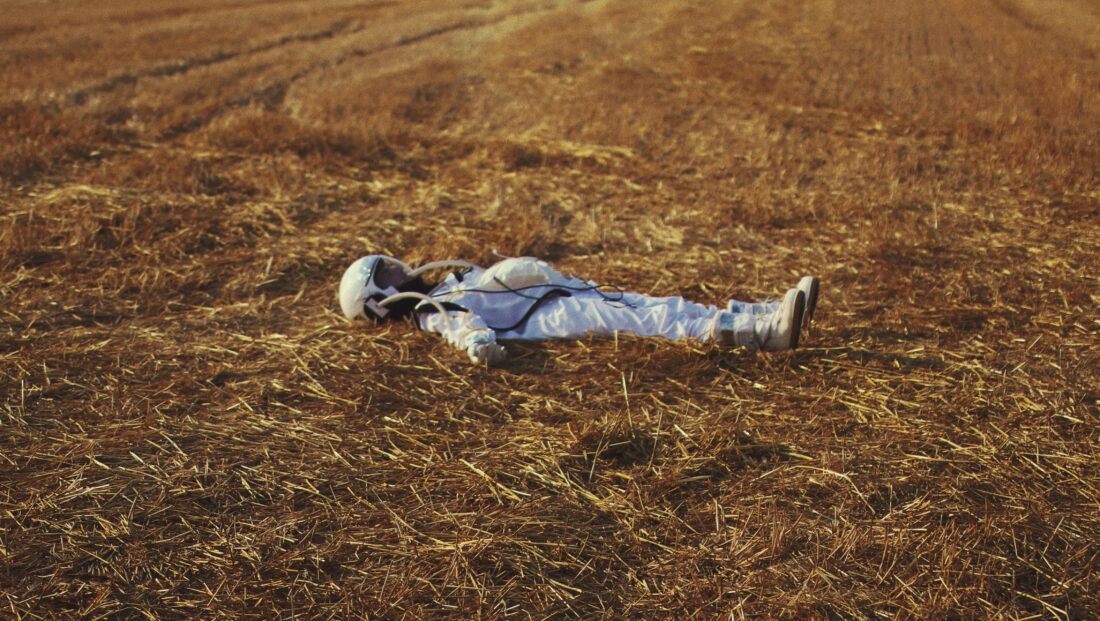 I never had plans to be an astronaut, but somehow I ended up in outer space.  For several decades I had to come to terms with the fact that there was something wrong with my cochlea nerve, that little bag of water behind your ear.  It’s the one that tells your body whether you are upside down or not, whether you are sideways or spiraling in lost orbital circles.  On rollercoasters, I go instantly nauseous and need to throw up in the nearest fairgrounds garbage can.  And the echoes of all those people around screaming and laughing!  No wonder I ended up in outer space.  It’s the only place left for me.  Even though I’ve always known I’d never pass astronaut training –– I had to find a way somehow!

I park my Toyota Rav 4 atop a mountain lookout over the canyons of Angeles Crest, above the nice little town of La Cañada, tucked somewhere between Glendale and Pasadena.  The rain patters on the windshield but no wipers are needed now.  The car is parked.  I’m afraid I’ll be here for a while.  I’ve got my supplies –– a few sandwiches, a gallon or two of water, some little snack items to keep me distracted during those moments when a feeling of total desolation nearly suffocates me.  Can’t really crack the windows much or the atmosphere outside will suck the oxygen out of my lungs and cause my eyes to explode like jumbo grapes in the microwave.

But God!  It’s gorgeous out there in the universe.  So much vastness I almost want to cry, but the rain is doing that for me.  So I just sit inside this airtight cabin and watch the world spin around.  I have my notebook here to write what thoughts and revelations come to me up here, if any.  I’ve got a few books and magazines to keep me tethered to the world for just a little longer.  Right now I’m in the middle of of Arthur C. Clarke’s ‘Childhood’s End.’  Ain’t that a hoot.  My childhood ended so long ago I can’t even remember the timeline anymore.  It was sooner than most people’s, I can tell you that at least.  It’s one of those evident masterpieces I missed in those days when I was supposed to be growing up.

I finished an omnibus of Raymond Chandler before this, but I’ve grown tired of investigating this mystery of what happened to my innocence.  Who stole it?  Did I misplace it, then accuse a close family member of stealing it? like my mother used to do with her family silver?  It never mattered.  Send Phillip Marlowe or the cops home because we always find it tucked beneath some old grandmother’s mothball-infused garments in some drawer somewhere.

The rain patters and time moves painfully slow.  But that is to be expected.  For every lugubrious minute that passes up here in the stratosphere, an hour passes below for them.  It doesn’t sound like much of a difference now but after an hour passes up here–– you got it–– 60 hours have passed down there.  Babies are born, old people expire, weddings are consummated, divorces proceeded –– so much of the planet can live or die in 60 hours.  Then add to that: two weeks up here.  You know the mind puzzle: You only have to fold a theoretical piece of paper 20 times to reach the moon?  It’s the exponential model.  Folding it six times gives you maybe a quarter of an inch, but as soon as you’ve reached the clouds at, say 14 folds, you’re really home free by that time.  Double the clouds and you’re touching a satellite.  It only takes a few more folds to reach the moon.

So two weeks up here…  I don’t know.  You’re the mathematician.

I just need to make sure I’ve got enough supplies to make it that long.

Odd that my wife and I can still message each other from so far away.  Amazing the technology these days.  Although…  her “tone” seems to have changed in the past few hours–– wait–– weeks?  More complaints about her back problems, and then her gall bladder.  Now nothing.  I haven’t heard from her in–– I don’t know how long.  Now I only get to talk to my son Jonah.  His voice has changed so much.  Last I remember I was driving him to swim practice after picking him up from the 5th grade.  Now he says he’s getting married.  Has it been that long?  I knew kids were growing up faster these days, but…  Where have I been all this time?  It was only a few minutes ago Jonah and Valerie were just–– kids?!  Jonah says he and his wife are having their first––  He hadn’t even finished telling me about his firstborn when all of a sudden he starts telling me about Tunia, his daughter, his second-born.  And then my daughter Valerie tells me she’s moving to Florence, Italy with her Italian girlfriend.  But she’s only–– 5 years old!

The last phone call I ever had with Jonah went like this, before the care worker at the Glen Oaks Retirement Home interrupted the satellite call:

“How’s your mother, Jonah?  I haven’t heard from her in a while.  Is everything okay?”

“No.  She hasn’t returned my phone calls or emails for a couple of years now.”

“Really?  Is that your hours or my hours?”

“When are you coming home, Dad?  I wanted you to meet my kids.  Will you come to Faden’s graduation?”

“My son, Dad.  He’s graduating high school.  You left us so long ago.  I don’t remember what I’ve told you.”

Suddenly, the cabin grew stuffy.  I wanted to suffocate.  This breathing thing is overrated.  Why do people have to breathe?  Can’t we just get through life without having to breathe so much?”

“When are you coming home?”

“I’m sorry, son.  I guess I lost track of how much time has been passing by every day.  I mean every minute.  I’m sorry, Jonah.  I’m sorry I left you guys.  I was wrong.  I was scared.  Outer space was calling me.  Something about the coldness on the surface of all our neighboring planets kept me awake at night.  But I’m coming home soon.  Let’s go find that Italian café Valerie is spending so much time at, okay?”

“Okay,” a voice crackled from across deep space.  “What have you been doing up there all this time, Dad?”

“Looking for my mother.  I still can’t find her anywhere.”

I wish Jonah’s mother and I hadn’t had that argument before I launched.  Something about my not using the right kind of sandwich meat in V’s lunch.  We engaged each other’s grievance triggers while I’m thinking about the engagement switches on the shuttle’s console –– I just couldn’t manage it all at the same time.  So there it was.  I left on a bitter note, and now I have to lodge that sickening knot between my lower intestines and my groin, just festering there until I come back for re-entry to put things to right.

Nobody really knows what it’s like to run your own indoor plumbing system in outer space.  Tribal primitives could just go out to the woods and, in modern park ranger parlance, “commit unlawful disposal of human remains.”  Then somebody came up with the outhouse, whether or not they took a cue from the Roman aqueduct––either way, it stunk to high heaven.  Now I’m up here in my space oddity capsule and I have to take careful account of where I dispose of my leavings.  The “Red Solo Cup” has so far been my saving grace.  But where to dump it out?  If you crack a door or roll down a window you risk sudden frost exposure.  Options are limited.  Good thing most of the windows are shaded to keep cruising space patrol looky-loo’s out of my private business.

Has there ever been a homeless astronaut?  Certainly.  Even with Major Tom’s Ground Control checking in with occasional status bursts, you’ll still be on your own––just like that first monkey who probably knew by instinct that he was never going to return home.

“Dad?” Jonah called out between the crackles.  I had almost forgotten he was still on the line.

“Forget about Grandma.  She’s like an ancient dinosaur by now, no offense.  Just fossils and desiccated DNA.  Dad, can you––?”

“You’re not here, Dad.  Come down from wherever you are and see us.  Before we’re all gone.”