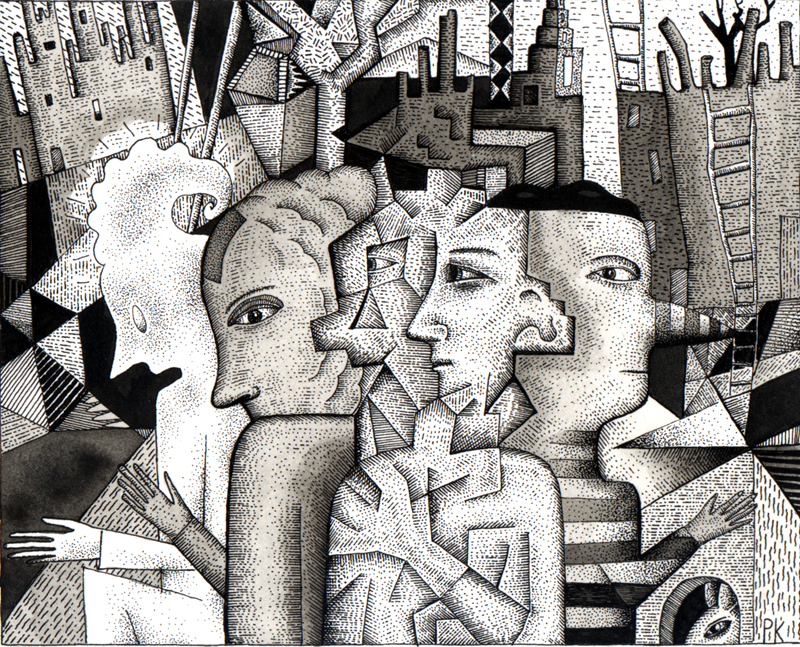 Their minds were deflating

in some sort of vacuum we had found

somewhere between home and here.

of the trash we had been throwing out the window the entire trek.

and yet so callous and careless.

The road signs were stapled together with the plastic organs

dripping with scented soaps that would-be emperors used to wash their hands.

Sanctioned by the government authorities and by the creative works of the age.

I don’t recognize any of you anymore.

I don’t recognize my driver, or the flashing holograms

Hundreds of thousands of employees abandoning their posts

and developing alzheimer’s because of some unknown radiation leak?

I’ll believe it when I remember it.

If I remember it.

Please I beg of you make up some new words

and whittle them into my ears.

I want to love and feel and fight or stand for something new,

but these roads, on the road, are forming loose associations and I’m furious over nothing.

and I’m circling a drain that leads to impossible positions and illogical logistics.

while the mind mechanics burn different icy designs into our shoulders,

located just behind the eye.

What a date! A couples activity to shock the ages isn’t it?

This waste bucket of empty skulls that litter the veterinarian psychiatrist’s office.

The collar was a bit restricting I must admit.

into the steering wheel

into the beach house and the school play.

The tree is dead, did it have leaves before?

The rats are dead, those were definitely alive before.

I remember, at least I think I do.

But our days have run into each other so quickly that they seem to remind me of the one before.

There’s probably something in that.

There’s probably something in here.

They can’t all be ghost towns full of spirits flinging themselves off the tops of concrete altars.

I won’t believe it.

I can’t believe it.

If I accept such an accusation that would make us, me, murderers, psycho-neonazis!

Quit whisping designs and simply drive the ice pick in!

We never needed these knick-knack gifts,

we needed the fix

and it’s gone. It escaped with the others down the shoulders of the silly red priest

that sang songs in the bars with the other sinners.

somewhere in the sand between here and there.

I have so little left to say, think, or feel about anything.

Naked in the city,

I thought I was somewhere in

wandering blindly into the open

unashamed of the boundaries set in place by

my short creation. I experienced this more than once,

being thrown into the pit,

set on the stage,

Our heads still filled with fir

whispering melodies into the civilized sky,

but my eyes only saw the lights of eyes and of stars.

I wasn’t made of jazz like many of the world’s lovers were.

I was surprised by the swing and folk and the ancient

suburban skies had long hidden from me.

It went from scraper to scraper,

(both the sky and the conscious caveman)

and the officials turned an ignorant eye away from the

events unfolding in front of them.

Join me in the blades!

the skipping fingers across our second skins.

Your father knew better than you

and his father better than his,

each generation a further step away from the field.

Shed your base and run far onto the arms of the winds frugal champion,

for once the ghost leaves your mouth,

and your music swings low,

it escapes into the ether that never returns.

protecting it with the curiosity of a mother,

a new mother who knows worth is worthless

and that we are hers.

Michael Garrett Ashby II is a poet and author based out of South Florida. His works have been published in anthologies and journals such as Spark Literary Anthology, Digital Papercuts, Touchstone Magazine, eFiction India, Weasel Press and Coastlines Literary Magazine. His poetry chapbook, Degenerates: a collection of poetry, is now available for purchase online, and you can keep up with his work by visiting his website mutepublishing.com