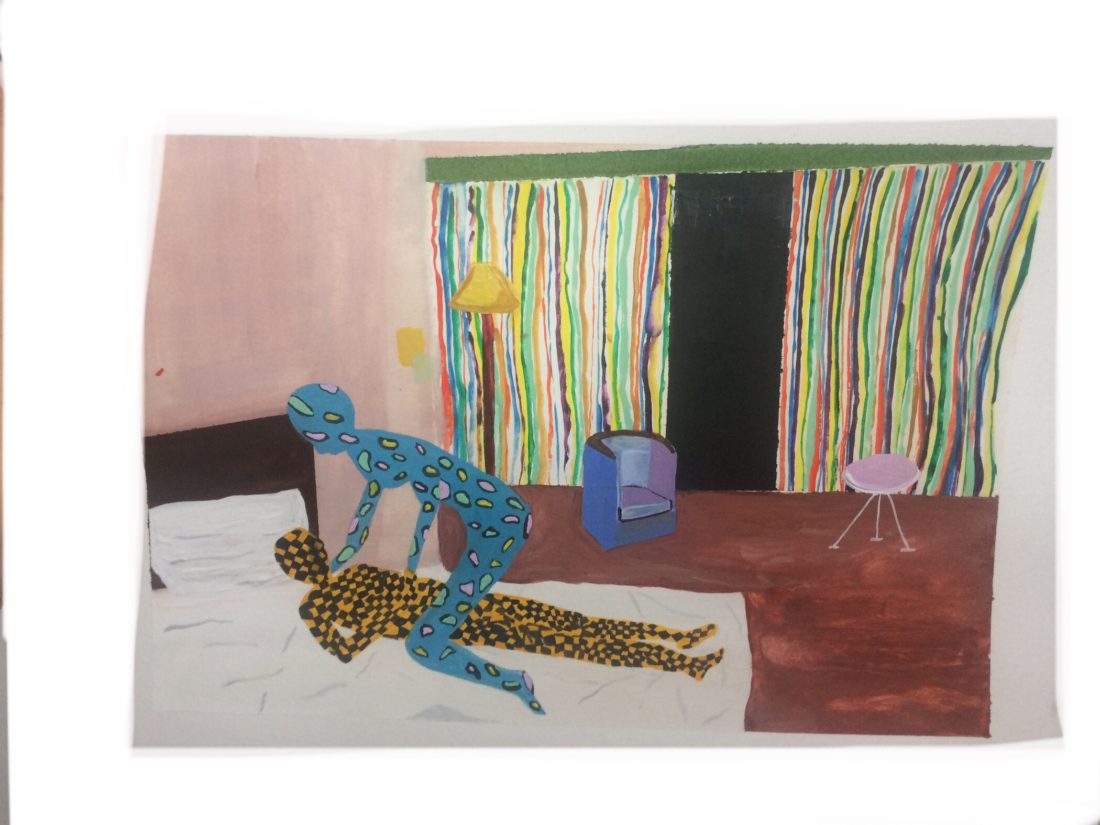 Shy Watson’s Cheap Yellow was published by Civil Coping Mechanisms in January of 2018. Recently I chatted with Shy about how the book came together, why high schoolers love the mall, and what makes Ja Rule a legend of popular music.

First of all, congratulations on the new book!

If I’m right your book was one of the winners of Civil Coping Mechanisms’ Mainline competition? I’ve been aware of the Mainline competition for a few years now. I’ve always thought it was a really cool contest, just with how quickly it happens and how it pops up out of nowhere. It’s kind of unlike anything else.

It was a finalist. June (Gehringer) & Ann Marie-Kinney tied for first but there were a few finalists, Amy (Saul-Zerby) & I being two of them, & CCM decided to go ahead and publish our manuscripts as well.  (CCM) seems to have a really good team of readers. I’ve wanted to enter the mainline contest for years.

Did you have the book in its present form pretty much complete when you submitted it to the contest? Did any pieces get added in during the editing process?

It was pretty much complete. I added a poem or two to “Skyline Yellow” which are my New York poems. I squeezed one about my boyfriend in there just so he could make it into the book, lol. There was also this whole thing where I wanted to add “Pac Sun Yellow” but then I took it out but Scott (Mclanahan)’s blurb was, like, entirely about the mall, so I put it back in and am thankful that that happened, because I’ve gotten some strong responses from that piece.

About that Mall poem, don’t you feel like the mall is kind of a mirror of a high school? Like, there are all these stores that cater to these distinct cliques, like you have Hot Topic and stores for skaters and gamers etc. The mall presents all of these identities that you can move through. I thought a lot about that while reading the poem.

Oh yeah, totally. In and around a lot of small towns it’s really the only place to go without your parents to socialize. I mean, that or youth group. But yes, absolutely. I remember being terrified of hot topic when I was ~11/12 y/o, just like I was scared of the kids with liberty spikes (probably because they were cooler than me). God, I went down such a mall hole last fall. I had this hypomanic idea to apply for all of these documentary grants and then buy a car/road trip around the US interviewing mall rats. I still want to do that, I think. The mall is so much. I think I’d want to do it through film but I don’t even know how to work a camera. I’d have to bring a film friend along for the ride.

That’s an amazing idea. I would read that book for sure. The mall is such an interesting space to move through in a poem. Also I think it being there speaks to a kind of weird nostalgia you explore with a lot of the poems. The past can be a painful place, but there’s always something fascinating about it. I feel like many of the poems draw the reader to the past, either the recent past or the distant.

I honestly don’t think much about the past, so it’s been a goal of mine, moving forward, to try and mine/work through more material about childhood, rural Missouri, etc. It’s just hard to think of those things when you’re in busy cities falling in love.

There is this kind of rambling character to the book that I think makes the book a more exciting read. There are around 5 different cities mentioned in it I think, maybe more. So there’s this sense of constant motion.

The chapters of the book are all named after certain shades of yellow. Where did this come from? Did you set out to organize things in this way when you began the book? Or did it come about when you were preparing it for publication?

At first I just had this giant document of poems with no structure at all. I noticed that a lot of them mention color, and I think it may have been “my aura is a cheap yellow” that triggered the idea, but yeah one day I was just like, wait, what if I let YELLOW be what organizes my book. From then on it was easy. The yellows were easy to come up with, and it felt very natural to me under which section each poem would go.

But the yellows are very unique too. They aren’t like, a lemon or something like that instead it’s stars on a wizard hat or dehydrated piss. I didn’t even know you could dehydrate piss!

Cheap Yellow is quite a big book of poetry. Do you tend to produce a lot of work very quickly? Or is it a slower process that builds up over time?

Probably the latter. The bulk of them were written over the course of a year. there are a few oldies in there from my first chapbook, AWAY STATUS (https://products.bottlecap.press/products/awaystatus) but for the most part, within a year. I generally go a week to a month without writing & then I’ll have an emo night where I just stay in brooding & I’ll write like 9 poems in one sitting. Since I’ve had an Iphone though I will sometimes type one up in notes on the subway or whatever to kill time. Those are definitely the lighter ones in the collection.

Do you think things like the Iphone notes app have really changed the way people write poetry? I think they kind of have, but I can’t explain how.

In a way, yeah. I used to be such a little asshole about maintaining the antiquity of pen and paper or whatever, but honestly it’s so much easier with notes. You can just copy and paste them into an email & then work through line breaks, etc. on Word. I still write in my journal quite a bit, but a lot more of those poems get lost because I never return to them or type them up. I feel like notes might catch more fleeting thoughts and poems that would otherwise never be preserved.

I like looking at books, particularly books of poetry, with the intention of finding the “space” where the book takes place, broadly speaking Cheap Yellow takes place mostly in interiors, bars, bedrooms, apartments, cars. I think about the dark, being inside, artificial light, places like the mall. Do you see the book in that same way?

I haven’t thought about it in those terms, but you’re certainly right. This really speaks to how rarely I’m outdoors, lol. I like that you think of books this way; I think my favorite part of writing is getting to hear other people’s interpretations of what I’ve written. Like wow! What a whole new lens to look at this work under. God, I miss being in writing workshops.

The world wants to know about your relationship with Ja Rule? What does Ja Rule mean to you?

My first memory of Ja Rule is being about 8 years old, after my parents divorced, and I heard what’s love by Fat Joe (which features Ja and Ashanti) on the radio (https://www.youtube.com/watch?v=VpvyG2NrS1Y). I fucking loved that song. I remember asking my dad, “Dad, what’s the Taj Mahal?” and he said, “It’s a big building in India.”

But Ja Rule to me is nostalgia. I grew up listening to early 2000’s R&B and was always feeling so much from it. Bright Eyes does the same thing for me. Also, one time I looked up Ja’s birth chart and if I remember correctly, he’s a triple pisces.

Do you ever throw his music on when you work on writing?

Sometimes. A lot of my “lantern yellow” or “edison lightbulb yellow” poems were written during a heavy Ja Rule phase. It’s my falling-in-love music (think: mesmerize, always on time, ain’t it funny). So when I’m feeling really good about someone, when I’m in crush mode, I’m more likely to throw his music on.

What I enjoy about your poems is that there is a great feeling of intimacy. I felt this especially in your prose piece in the Fading Photograph chapter, near the very end of the book. I think that’s what I enjoyed the most in that piece, and the book as a whole. You bring out the exciting and positive sides of intimacy, but also how it can at times feel frightening. Cheap Yellow it captures the intensity of intimacy very well.

Aw, thank you. Yeah, it is scary to be intimate, but so is everything else. I figure it’s better to be heartbroken than to hold back. Fading Photograph was about probably my most intense relationship I’ve ever been in, so there’s a lot of feeling there. I also wrote it right after I read Scott Mclanahan’s The Sarah Book which is largely responsible for the long run-on/breathless nature of the prose.

At times the way it is written made me think you were talking about multiple people, there was this kind of shifting effect that I really enjoyed. I guess all intense relationships kind of shift in that way.

Oh yeah, absolutely. People are always changing it’s hard to keep up with.

What plans do you have for the future? Any tour plans or upcoming readings?

Well I’m going to AWP  and have two readings so far planned there. Also going to Mission Creek Festival in Iowa in April. I do want to go on a tour but I’m waiting to hear back from grad schools so I can better plan when. Probably in the summer. I kind of want to write a book of fiction next; I’m just pretty bad at it.

I’m looking forward to reading whatever you get up to next. Thanks for talking with me!