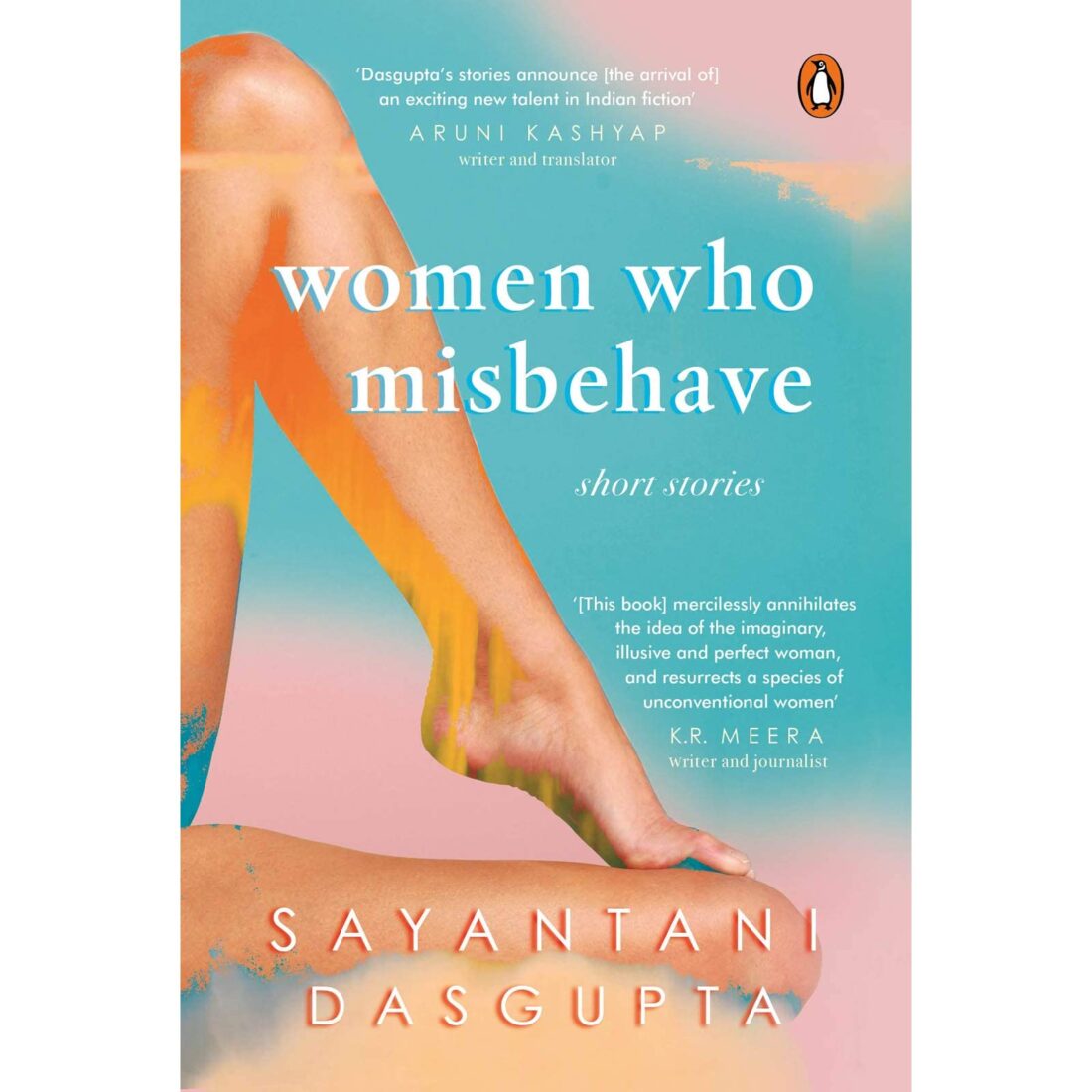 In the foreword to her debut collection of short stories, Women Who Misbehave Sayantani Dasgupta recalls her childhood spent role-playing with her brother in which she took on the roles of heroes and villains from popular Bollywood movies. And though her brother complained of being relegated to the hapless heroine roles, Sayantani says she got away with it because she was “stronger and louder.” Dasgupta’s misbehaving women, like her, are also strong and loud. If they are not stronger or louder, they are subversive, sneaky, callous, cruel. These women misbehave and upend society’s expectations. They murder, lie, cheat, cajole. They have an insatiable appetite to read and write. Through her stories, Dasgupta explores societal expectation heaped on women and what it means to have agency and autonomy in a patriarchal world. In this interview, Dasgupta talks about the liminal space between fiction and non-fiction, her process of bring characters to life and why she chose to write stories that center women in unconventional roles.

Sayantani Dasgupta’s other works include a collection of non-fiction essays, Fire Girl:  Essays on India, America and In-between, and the chapbook The House of Nails: Memories of a New Delhi Childhood.

I love the provocative title Women Who Misbehave. However, the protagonists in these stories are not really misbehaving but rather going against societal expectations of a patriarchal Indian society. Can you speak a bit on your decision to highlight these norm-defying women?

I find women’s interior lives so interesting irrespective of the time and place in history. They are forever being given codes by their respective societies in terms of how to behave and conform. I don’t know if men anywhere grow up with remotely the same number of rules and manners of behavior. When I came to the US as a grad student, I naïvely thought that women here would be far more empowered than those back home. So, imagine my surprise on discovering how few women were in the upper admin of my university. Once I started teaching, I found my female students exhibiting the kind of need to conform and fit in that I had seen back home. I understood that it wasn’t necessarily a question of one society being more empowered than the other. It was simply a case of handing down rules and norms that on the surface looked different but were eerily alike. Which is why, I remain fascinated by what women say and project but even more so by what they don’t say and yet carry within themselves.

In Miss Josephine your protagonist is the Austrian reclusive of the same name. Her profession of a baker contrasts so starkly with her personality not to mention how the story leaves us with more questions about her than answers. I can’t help but think this could as easily have been a non-fiction essay. Am I on the right track? Can you talk a little bit about your approach to writing fiction vs non-fiction?

That’s very interesting! To me, Miss Josephine, whether in terms of the character, the overall content of the story, or the first-person plural point of view I have employed in telling the story, all contribute toward making it strictly fictional. I can’t remember at what point of writing it I realized that she was my version of the witch from Hansel and Gretel. Maybe it’s the sweets she bakes, or the reclusive life she leads or how she is such a source of fascination for the neighborhood children.

For the most part, fiction for me happens when a sentence or an image I really like or am intrigued by arrives from whatever magical places they live in and demand they be written down before I forget. It’s very instinctive. I think it’s because fiction is our entry point as children in to the world of stories.

Creative nonfiction as a genre came into my life in grad school. I think my approach to it is therefore more academic, and I write the essays I write to unpack some question or memory. It’s a gradual, more instruction-driven approach.

Considering the new revelation in the “Cat Person” story, I immediately thought of “A Hard Kind of Love,” where the writer protagonist uses very personal moments from her married life and turns them into fictional stories. What are your thoughts on auto-fiction? How much of your personal life bleeds into your fiction? Or do you keep the two strictly separate?

I knew it was a matter of time before someone asked me this question! I am happy to say that writer wife and her husband in “A Hard Kind of Love” are fictional. However, I will also say that I totally identify with the emotional truth of the story. The agony of writing but not being published, or of being published but not finding the kind of audience you want, or the amount of time that goes into finishing any writing project, and the things and even people we have to say no to because writing is such a demanding creature.

The same goes with the other stories as well. There is a kernel of truth in all of them, be that through family lore (“The Reader” is a reimagined telling of my paternal great grandparents) or news (“Shaaji and Satnaam” is very loosely based on a true crime incident I read about a few years ago).

In The Waitress you explore the two POV when it comes to choices or freedoms available to women. The Indian and the American girls in this story are not all that different, are they? It is just a matter of perspective. What was the inspiration for this story?

What a terrific question! There were two inspirations behind this story.

First, in my fifteen years thus far in the US, I have encountered many patronizing comments to the effect that my life must be so much better now that I live here versus in India. But the same me, when in countries like Bangladesh, have received admiring comments and great hospitality because I am from India. I personally don’t think my life is any better or worse based on which country I live in. As long as I have access to good food and three solid friends, I am set anywhere. It does amaze me though that one’s sense of self can change so much depending on where they grow up, where they live, and what others think they know and understand of that life.

The second inspiration is from George Saunders’ heart-wrenching story Puppy. I have read and taught that a few hundred times, and each time, I am taken by the inventive format and the sheer breadth of the characters encompassed within so few words.

Publishing a book in India and later releasing in US sounds like a unique experience. How is it being received in India? Are you hearing from readers who identify with some or one of your protagonists? I know I identify with the narrator of The Party.

Thus far, readers have been very kind to my misbehaving women. As you very well know, writing is such a lonely job, and while you are in the midst of it and even when you send it out for publication, there is no way of knowing if anyone will actually read your words or connect with them. I am grateful that my book has found its way into the world.

I don’t recommend publishing during any pandemic though. If it weren’t for Covid-19, I’d have gone to India for the release. To have to “enjoy” its launch from my living room couch was really not that enjoyable. Of course, given the state of the world, it seems petty to complain about something as small as a book. But it also took me fourteen years to get all these people out of my head and onto the page.

In two of your stories, “Knots” and “Shaaji and Satnam,” the women protagonists both run away from home to marry the boy they love. But these marriages don’t end up in happily ever after and even though the women at some point regret their decision, those decisions were the only form of agency they could exercise in the patriarchal families they come from. Is that what you were trying to portray in these stories?

While the protagonists of these stories do run away from home to marry the men they love, I think that’s where the similarities end. The two women are very different in terms of the socio-economic worlds they come from, where they live, and of course, the time period. Shaaji has little to no opportunities. The only way she can leave her father’s house is by marrying someone of his choice. But Manasi in “Knots” comes from a wealthy, educated family where her father dreams of her becoming a doctor. I’d also argue that there is far greater prospect of her finding happiness in her life because of the way in which she leaves her home, the kind of man she falls in love with versus Shaaji and the (pun intended) bloody choices she makes.

In your non-fiction work as well as in the stories in WWM, you mention your close relationship with your brother. It is the same for me, so I am curious how he feels about your writing and the way you write about him?

Thus far, he has not complained! I remain thrilled and grateful for his support. It amazes me that this isn’t something he has come to now, as an adult. He was this terrific, supportive guy even when we were kids. I am very lucky.