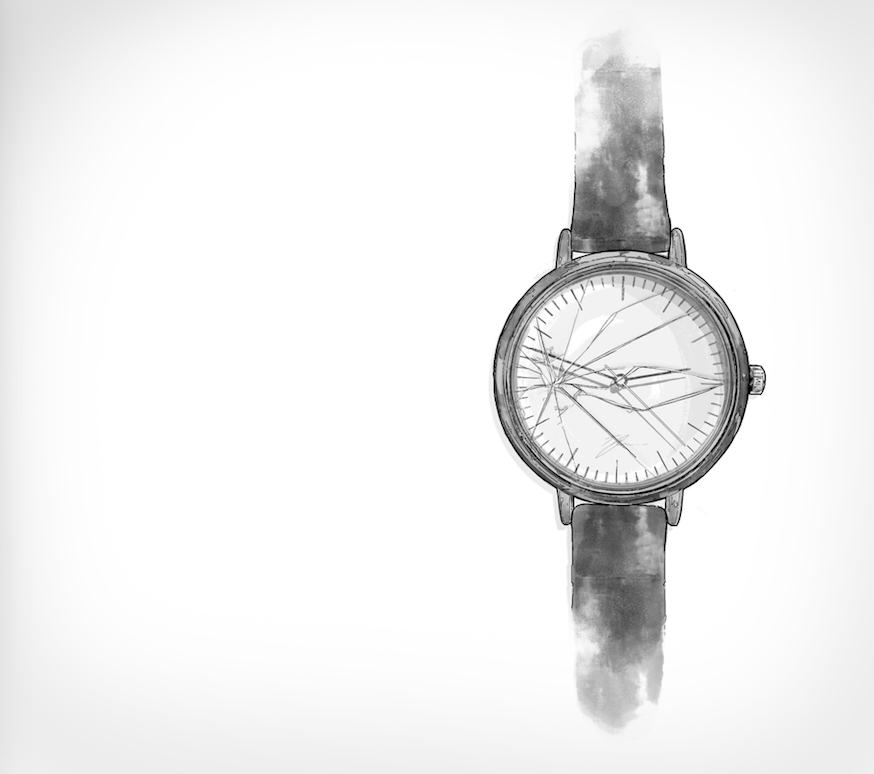 As I carry him up the last set of stairs, he slides off my shoulder again. My arms wrap around his thighs and catch him, stop him from a nasty fall down the stairwell. After another push from my legs, my quads burn and his weight centers. His breath still reeks like paint thinner.

Now at the top landing, I stagger and lean over the railing to cough. Then check my cracked watch.

One floor below, my wife climbs the stairs with her head down and back hunched. She wears a backpack and carries a folded lawn chair. Her heavy breaths bounce off the block walls. She looks up through the shaft and says between gasps, “What time is it? Are we late?”

Sweat drips down the tip of my nose and falls past her face, disappears before it can splat. The last time I took the stairs to a dorm’s rooftop, I was the same age as this sack of shit draped over my shoulder. During Hell Week, our frat president made my pledge class swear a vow of obedience and secrecy. On the last night, we gathered on a dorm’s main floor and he told us it was time for our reckoning. The big brothers handed each of us a chipped cinder block, a spool of fishing line, and a rusty three-pronged hook. They pointed to the stairwell and told us to climb to our destiny.

My wife catches up and we push through the last door. Together, we step out onto the rooftop and into the night. The glow from the moon above and the campus lights below gives us enough to see.

The windows in the other dorms stay pitch black. The silhouettes of these tall buildings create a dark skyline that looms above the silent college grounds. The adjacent dorm’s rooftop stays empty, so I check my cracked watch.

My wife unfolds the lawn chair. She puts it on the nearest ledge with its back towards the vast empty air. I bend down and place the guilty boy onto the chair’s nylon webbing.

From her backpack, my wife pulls out her favorite red rope and black leather straps. She ties the guilty boy’s arms to the plastic armrests. Binds his legs to the aluminum legs. She straps my first ball gag around his head and pries open his mouth, stuffs the rubber sphere behind his teeth. The thing tastes like the bottom of a sneaker and stains your tongue black for days.

After all this, his head still droops. Still knocked out. My wife smacks the back of my head and in the same tough voice she uses to scold our dog, she says, “I told you we used too much ether!”

From her backpack, she pulls out some expired smelling salts and breaks them open. The ammonia reeks in the wind before she stuffs them up his nostrils. She pulls out a wooden paddle with etched Greek letters and hands it to me. With a tight grip, I use it to tap each side of the guilty boy’s face, over and over. His cheeks turn red before his head lifts and eyes pop open.

He looks at us, then all around. Eyes go wide. The gag muffles his scream as he wiggles his arms and legs against the knots and buckles. He jerks and makes the chair slide. Its legs scratch against the ground. I shake my head and point behind him with the paddle.

A strong breeze blows up from over the edge as he twists his head around to peek. At this height and angle, he can’t see the ground. The gag muffles his screams again. His whole body shakes. Drool oozes down from the sides of his mouth. With each exhale, bubbles spew. A dark stain appears in his crotch and spreads down his sweatpants.

From the back pocket of her mom jeans, my wife pulls out her phone and holds it under his chin. The screen lights up his pale face. Covered in pimples and sweat.

He looks at the screen to see a portrait of a teenage boy. A spitting image of a younger me. The perfect boy wears his favorite button-up and shows off his new straight teeth. He folds his arms so you can see his watch. His high school graduation gift.

My wife leans closer. Stares straight at the guilty boy. In the same harsh voice she used when our son broke a rule, she asks, “Do you know who this is?”

He looks back down at the screen and his eyes go cross. She swipes the screen again and again to show more portraits of other good boys. All the same age. Each one smiles for the camera and poses in a field or against a brick wall. Each one wears a collared shirt tucked into nice pants. One was my son’s new best friend. Another, his roommate.

Every time she swipes, the guilty boy just shakes his head. And my grip on the paddle tightens. After the last portrait, my wife’s makeup runs down her face. In the same stern voice she used when our son didn’t listen, she says, “Well, you should. You really should.”

After my pledge class lined up along the dorm’s rooftop ledge, the frat president called us minnows and asked if we were hungry. He told us to tie one end of our fishing line to our cinder block and the other to our hook. He told us to place our hook on the tip of our tongue and close our mouth.

My wife swipes the screen of her phone again. It shows a picture of a bunch of random teens in mid-stride on a rooftop, all of them headed towards an edge. It shows everyone on the front row with one foot on the ledge and the other stepping out into the vast empty air. On the top of the picture, it reads in all caps: DO THE LEMMING CHALLENGE!!

My wife tilts her head and squints. In the same disappointed voice she used when our son got caught in a lie, she asks the guilty boy, “Did you create this?”

He shakes his head so hard that spit flies off. The smelling salts slide out his nose.

He looks up at her, then me. The gag turns his words into various hums.

My wife looks at her phone and taps on it again. She shoves it back under his face and it acts as a spotlight. Using the same voice as before, she says, “But you shared it, didn’t you?”

The screen shows the same image in a social media feed. It sits between pictures of the guilty boy doing keg stands and undie runs.

My wife turns to me. In the same soft voice she uses when blindfolded, she whispers, “What time did the coroner say he died again?”

The gag still muffles his plea. He can’t tell us if he really meant for kids to do it or if he just thought it was all a joke. Another fucking prank meme way better than those other hoax challenges like swallowing Tide Pods or lighting rubbing alcohol on your skin. Because it’s all fun and games until someone gets killed.

When the frat president yelled at our big brothers to do it, they waved at us and kicked our cinder blocks over the ledge. We watched the blocks fall through the vast empty air, as if sinking in water. We wanted to scream, but they taped our mouths. We wanted to grab the lines, but they tied our hands behind our backs. So we just squeezed our eyes shut. Ready for our cheeks and lips to get speared and ripped apart from the inside. Choke to death on our own blood.

The blocks hit the ground but our mouths weren’t hooked. The line had enough slack to not pull, longer in length than the building stood tall. The president and all the big brothers busted out in laughter. They hugged us and handed us our paddles.

That next semester, a pledge died in a car trunk while playing drown the maggot. Nationals closed our chapter. The university got sued. And then it all stopped, until it evolved into something that can’t be stopped.

Before our son’s funeral, the local news article about the challenge went viral. The deceased weren’t referred to as “victims” and the writer refused to correct it. The most-liked comment said our son and his squad were the epitome of natural selection.

We went to the other victims’ funerals. Wore the same black outfit day after day. After the last one, we signed up for grief counseling with the other parents. As a group, we shared our feelings and prayed together and all that other stupid shit they say will help you move on.

One night, my wife stood up and said that we could sit here and cry, or we could actually do something. Stop this from ever happening again. Another ex-mom spoke up and said we can’t stop kids from being kids. My wife nodded and said, yeah, but we can stop murderers from being murderers.

She told the group that she didn’t understand how any of this happened until she looked at the walls of our home. There, framed and matted, hung pictures of her confirmation and my bar mitzvah, but nothing like that for our son. Cause all he ever had was stuff on his phone. Like selfie videos of Slurpee brain freezes and video game dance moves.

The guilty boy stares at us with his eyebrows scrunched. He watches my foot rest on the chair, between his legs. Another cool breeze blows around us. A bell tolls from the tower in the middle of the college grounds. It dongs and dongs, over and over. I check my cracked watch.

From the other side of campus, a deep scream echoes off the buildings and ends with a solid thud. In the dark distance, another yell erupts and then stops after a wet crunch. Out of the corner of my eye, a shadow shrieks and falls off the adjacent dorm. A sound as thick as a watermelon busting comes from below. We stand still and listen to our heartbeats.

The cold wind blows back my wife’s hair. She strokes the guilty boy’s cheek. Smears his sweat and tears. Then, in the same sweet voice she used when she tucked our son into bed, she coos into his ear, “I’m sorry for your mother.”

After a last look at my cracked watch, I nod. My wife unbuckles the gag and yanks out its slobbered ball. I wave at the guilty boy and kick the chair.