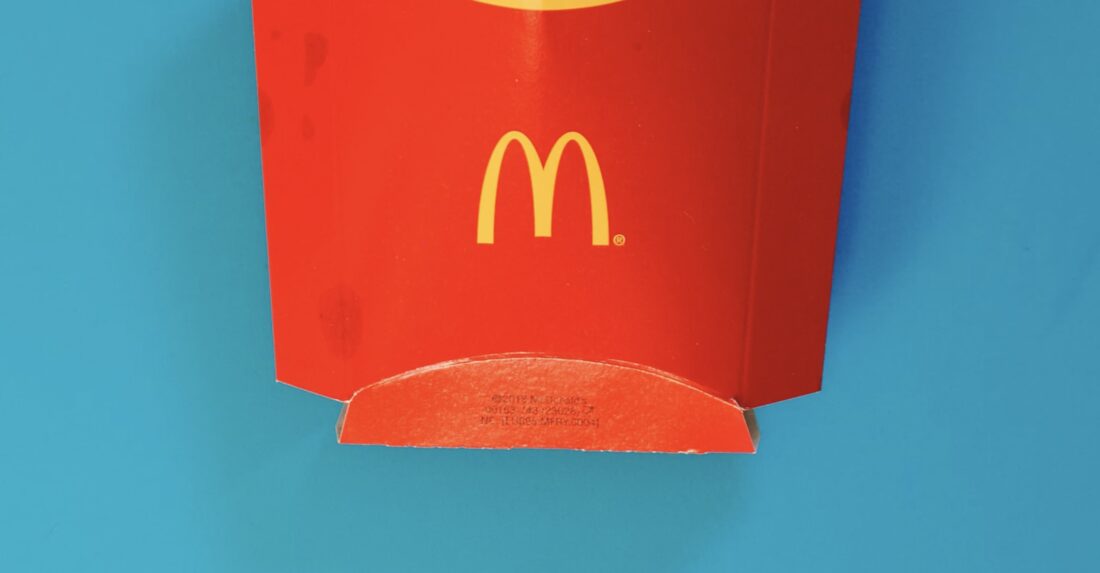 “I’m begging you to give me permission to fire him.”

Gabe’s plea was more pathetic than intended, his meek tone reverberating within his doughy jaw.

“Please,” he doubled down.

“But he hasn’t done anything,” sighed his manager, making his impatience clear. “And he aced McFlurry training. It’s summer, Gabe. We need him. Anything else?”

Gabe turned from the sizzling windows of the McDonald’s, peering back to the lethargic herd of munching patrons, eyes indolent under the blanket of mildewed air conditioning.

Nate Ketter paced outside, knuckles dripping with Butterfinger McFlurry. In contrast to Gabe, the eighteen-year old maintained a creatine-bolstered frame. Uniform untucked, face florid from sun and anger, Nate boiled as his friends chawed and spat with vulgar verve.

Make him swallow his teeth.

Gabe had fucked up, royally. He knew he shouldn’t have hired Tiffany. “Never schedule boys and girls together on night shifts,” Ronald McDonald had surely once advised. Soon, Tiffany and Nate were an item. But, on a slow, late shift of his own, Gabe found himself alone with Tiffany.

It was out of boredom, Gabe knew, that she’d allowed him to fuck her in the meat locker. She had turned eighteen one month ago, Gabe due to be thirty-three in a week. Ignoble, sure. A rusty scout’s knife further whittling down his already-splintered morality. What did rules matter? This place had lost its austere glow by the time Gabe had turned sixteen and Super Size Me hit the shelves of Blockbuster.

Still, Nate found out about the affair during the lunch rush. All hell broke loose, etc. Now, man and boy stood opposed in a conflict whose outcome both were aware was guaranteed, if not insuperable.

Gabe straightened his “Assistant Manager” pin, exiting onto the sun-blasted blacktop. The same blacktop where he’d last seen his mother.

At the height of her last binge she’d dropped him here with as much change as her acrylic nails could scrape from the ashtray of her Dodge Dart.

“Just stuff your face ‘til I get back. And if it gets too long, talk to the people behind the counter. They’ll take care of you.”

This was not irregular as she’d routinely used McDonald’s as a surrogate baby-sitter. Gabe’s father a withering memory, Ronald McDonald stood as his proud patriarch. An iridescent grin, as everlasting as the food itself, the boy was enveloped warmly within the castle of sustenance by  a cast of familial characters: Grimace his playful, amorphous cousin. Mayor McCheese the venerable “Pa.” The Hamburglar his mischievous uncle the family loved to pretend to hate. The Play Place his backyard and canvas of imagination; although other children were frequently present, they were merely Gabe’s guests, welcomed VIPs to a perennial birthday party.

Times change. So does fast food. Colors of yellow and red stomped to ash, the restaurant had been tarred with black and grey. Uniforms reminiscent of Space Mountain ride operators were dipped in obsidian to give the impression of Imperial-issued garb. Tube slides dismantled and incinerated, ball pits bagged and melted down to form the plastic of the exponentially shrinking Happy Meal toys.

“If you go back to work,” offered Gabe. “We’ll forget your whole tirade. Water under the bridge.”

Well played, thought Gabe. It was a ruse, anyhow. What little business there was had screeched to a halt; the windows were pressed with secret sauce-stained faces, the drive-thru clogged with idling cars whose passengers frothed with an anticipation of violence. Fights in this town were small miracles, as common as the annual arrival of the McRib, and devoured just as voraciously.

The names of previous prevailers. Yet sadly, whether through misfortune or cosmic comeuppance, all three had succumbed to grisly fates.

Ben Ratner was riddled with bullets when his company took enemy fire in Afghanistan.

Pete Nettle was drunkenly t-boned at a nearby intersection.

Roy Swant overdosed on methamphetamine, found outback of a McDonald’s (not this one, the other one across town).

Perhaps this pervasive fate sought to infect the encroaching Nate as the freshly graduated high schooler lapped the backs of his ice cream soaked hands with serpentine flair, slithering toward him.

But had Gabe now become the bully? The instigator. If true, then it was he, not Nate, who would meet a violent end. Nate would serve as executioner, shattering the bridge of his nose, sending him backward for his skull to pop on the blacktop, blood oozing from him like the strawberry syrup of a summer parfait. By transitive property, Nate would become the new Gabe. Submerged and buried within a childhood coffin.

Nate’s musculature coiled as his shoulder pulled back, but his progress was swiftly interrupted. With spectacular quickness, Gabe had removed his uniform, hurling his shirt into Nate’s flushed face. As Nate clawed at the shirt, struggling for visibility, the onlookers were left in silent confusion as Gabe’s slip-proof loafers slapped the pavement.

Lifted by a summer breeze and the epiphany of his considerable lack of responsibility, he sprinted away, contemplative. Maybe he’d stop at the nearest Greyhound station and buy the cheapest ticket. Maybe he’d stop a town over and ask if anyone had seen his mother. Or, maybe he’d run until he found the next golden arches, suffused with friendly cartoon faces and the tastes of youth.

A home to him. Both old and new.