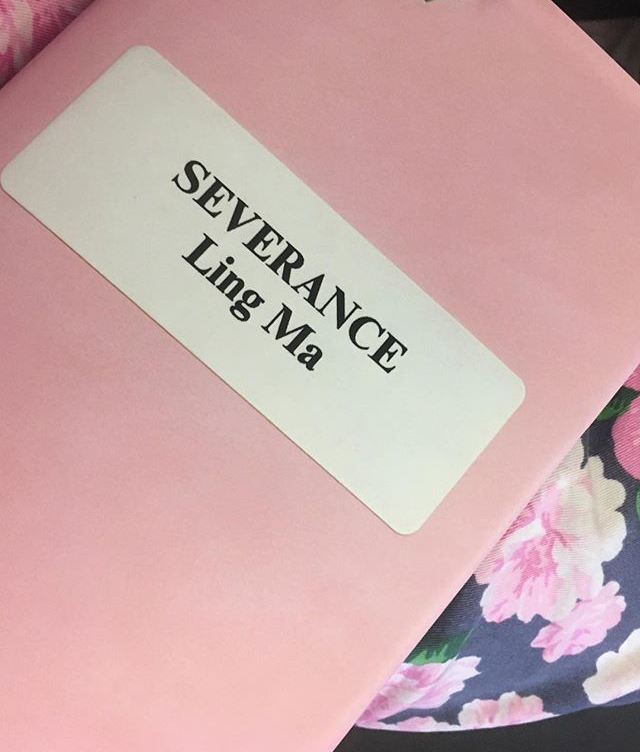 I know I’m late to the party on this one. Ever since Ling Ma’s Severance was published last August, it’s popped up on any number of year-end lists, or best-of lists, or books-to-look-out-for-in-2019 lists. I myself rushed to the bookstore on publication day, solely on the strength of Severance’s early reviews. I blazed through it in a state of near rapture, but figured that a book with such a grand and growing reputation hardly needed a mention here.

But Severance has been the bat in my belfry for half a year now—rocketing around my brain with abandon; crashing into everything I encounter, whether it’s a tense story of survival or a tense story of cubicle politics. Ma’s is a novel with staying power, and my selfish hope is that I can relax its grip on my mind by passing it on to another host…though it’s not for that self-serving reason alone that I wholeheartedly recommend it to anyone reading this!

To summarize, briefly: Severance is the story of an apocalypse. The end of the world is, at first, believably slow—background noise to a number of interpersonal dramas that only bears mentioning in hindsight. Heartache and work and the great bustling city seem to carry both urgency and durability. But Shen Fever, spread along international shipping lanes via fungal spores, changes the weight of things, and soon the only priority is survival.

Shen Fever numbs the infected to new experiences. The infected do not eat. They do not notice when they are injured. They are, to borrow an elegant phrase, incapable of their own distress. They become unshakably invested in old patterns, going through the motions without variation until their routines cement and they become, effectively, zombies. They inspire horror in the healthy while their bodies rot; they are alive in only the barest sense of the word. The spark of consciousness is gone, and to many they no longer register as human.

(I use the Z-word because of its easy proximity to the situation, though Ma makes it explicitly, inescapably clear that these victims of Shen Fever pose no threat at all to the uninfected—that to treat them like zombies, to kill them like zombies, is itself clearly a symptom of some toxic, testosteronic fantasy. (like all the best horror stories, it isn’t the supernatural element of Severance that inspires the greatest alarm.))

The devastating spread of the disease is relayed to us by Candace Chen, a high-achieving but barely motivated woman living in New York. Ma brings the uncanny to life in the empty city, and the brutality of her depictions made me keenly aware of the excesses of a place like New York, especially when it no longer serves the population there (though perhaps it never did!).

Candace traces two chronologies of the apocalypse in Severance: life in New York, before and during the early days of Shen Fever, and the exodus from the city in search of greener pastures (or: any way to sustain a shadow of life as we know it), along with a ragtag bunch of survivors. Their leaders are obsessed with myth-making, giving a theological bent to their misfortune as they try to make sense of surviving when no one else could.

Before Shen Fever ever reaches her, Candace has contracted an immediately recognizable workaholism. It is the Millennial’s drive to hustle; to grind; despite having no clear sense of what she is working for or what she is trying to prove. The increasingly viscid habits of Candace-the-Laborer—the long hours of repetitive cubicle work; the daily commuting paths; the vortex of a task that makes her forget to eat—often bear a sinister resemblance to the symptoms of Shen Fever. But her narration remains as lucid as any firsthand account of the apocalypse could be.

In Severance, nostalgia is the great enemy. Whether it is the catalyst for Shen Fever or only its symptom, it is a noxious threat. Nostalgia (and its partner, routine) bring human bodies through apathy and into incapacity. It is never explained how Candance maintained an immunity while those around her succumbed, but one suggestion is that her immunity has something to do with a feeling of otherness; of being apart no matter how deeply she accepts the workaholic striving of the big city.

A third timeline, given far less acreage than the others, certainly haunts Candace’s narration. Her parents’ emigration from China to Utah, though only a handful of pages, gives the story a softness and hopefulness, as their story of acclimatization and sacrifice is colored with touching details of affection. By centering her self-conception on their journey, Candace seems far less rooted than her vulnerable peers. Though not delinked from a concrete past, she is protected from the disease of nostalgia, and cannot elevate the past above the present.

I won’t let any more details slip here—suffice it to say that Ma wrings sweaty-palm suspense of all sorts from Candace’s cross-country trek. There are secrets, power struggles, and near-escapes enough to make Severance feel like a page-turner. Ma is a writer talented enough to meld a tense escapist story with more reflective, slice-of-life moments, never letting us see the cracks. In this way, she’s like the best of athletes or actors, and it’s often just fun to read someone so virtuosic that they make it look easy.