Elias and the Wolf 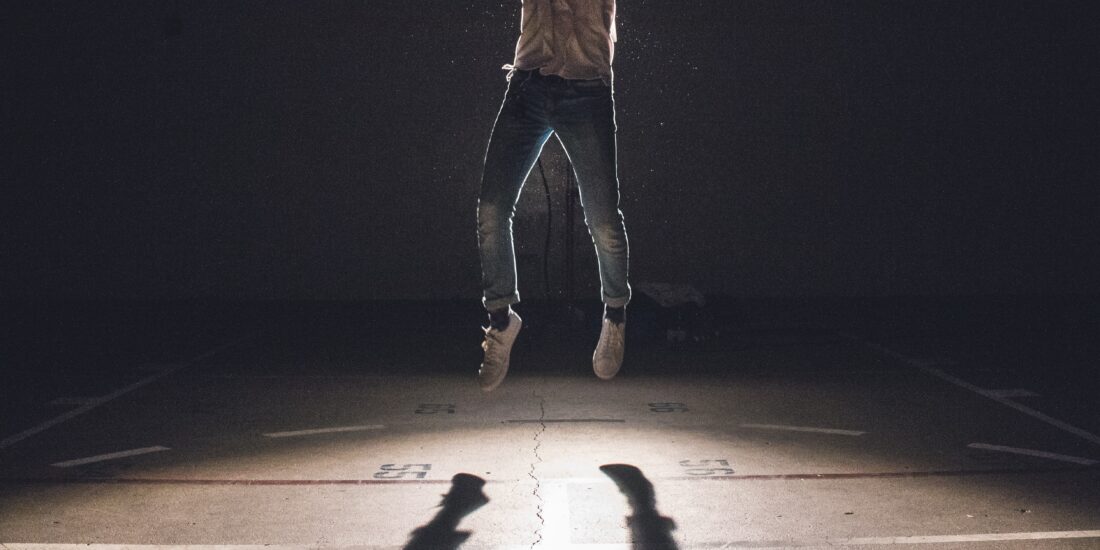 The wolf had come for him. Come to devour him, swallow him whole until he was more beast than man, his flesh turned to fur. He knew the beast well enough to fear it.

Every night, the wolf pursued him in his dreams, unrelenting. Elias had become accustomed to waking up exhausted, rest eluding him like he managed to elude the wolf with each and every slumber. Cold, sticky sweat oozed down his forehead, a symptom of the diaphoresis he suffered from. There was no cure other than to let the wolf ensnare him.

The image of the wolf clung to the walls of his mind like smoke. The lamp on his bedside table turned on with the pull of a chain, taking on the job of the sun that had yet to rise. It was a weak impersonation, the single dim bulb casting more shadow than light around the small room. He didn’t bother getting a shower that morning to cleanse the perspiration from his body. It was the weekend, and he had more onerous work to do.

Steam billowed like a ghost from his coffee mug as he flicked on the garage light. But the real ghost existed within the 98’ Plymouth Breeze. He stood staring at it while stuck inside the portal between past and present. Faded red paint. Absent windshield. His high school graduation tassel still hanging from the rear-view mirror. Both passenger doors and fenders replaced, the cadaverous grey yet to be painted. Ever since the wolf began visiting him months ago, he had been spending his weekends restoring the old car. Why had he kept it? It was as ugly as sin, even before it was wrecked in that tragic, cataclysmic crash. He had let himself forget those demons while the car gathered dust in his garage, and now here he was spending time with his past nightmares. He had hoped that by letting them haunt him during the day, the wolf would leave him alone at night. But the wolf never left him alone.

As he worked, he kept a rag in the back pocket of his jeans, constantly removing it to dry his hands. They were always sweaty, the world forever wet beneath his touch.

Sitting in the driver’s seat, Elias tore at the dash that had grown delicate and cracked with time. He tossed pieces of broken plastic into the passenger seat—Charlie’s seat. He took a beat to dry his hands on the rag, his gaze unconsciously drifting to his right. He couldn’t hold back the painful rush of memories even if he tried. In those brief conscious moments, he allowed the guilt to gnaw at him more viciously than ever. It was the very privilege he had been denying the wolf while he slept. His work became chaotic, frantic. Prying the hard material away as though he could shred the pieces of himself that he hated too. Then, light reflected off something on the floorboard, peeking out from beneath the soiled floor mat. Leaning over, he plucked the bit of fractured glass from its hiding place. He had been sure he had gotten it all. Turning it over in his hand, his breath was ripped from his lungs. The glass was speckled with the dark remnants of blood. Charlie’s blood.

Charlie had been his best friend once upon a time. They were kindred spirits. Sharing secrets with each other since they were kids. Countless games of cops and robbers, road trips, concerts. Once or twice, an experiment with psychedelics that they blamed on their youthful ignorance. Experiencing heartbreak, life’s many joys and traumas. And then it was over. A memory. A reminder. Just another ghost.

Standing on feeble legs, Elias slammed the driver door shut. Resting his hands on the top of the car, he bowed his head and closed his eyes. Memories. Guilt. Loss. His hands clenched into fists. Taking a step back, he punched the window. Shattered glass rained over his feet and inside the car. Blood dripped from his ruined knuckles, sparkling on fragments of red glass. It only meant more work for him to do, nothing else.

That night, he opened a fresh pack of Lucky Strikes after dinner. The lit cherry, like an ember jewel, was the only light in the darkened living room beside the small television. It was playing an old black-and-white film with the volume down low. His eyes began to drift closed. The cigarette burned out between his fingers. The moon peeked from behind grey clouds, its soft glow pouring in through the window. He heard a snarl, jerking him awake. Tossing the butt in the ashtray, he dragged himself out of his chair and to bed.

The wolf was there again when he fell asleep. It growled and bared its sharp teeth. Its fur like salt and pepper. Its eyes black except for a glint of moonlight.

He almost ran, just like he had done every night for months. But he was tired. Tired of running from everything that he kept shrouded behind his walls. Would it be more dangerous to ignore it in the end? Whatever the wolf had planned for him, it was time to surrender. He didn’t attempt to evade it, not this time. It would finally give him what he deserved. It couldn’t do worse to him than he had already done to himself, could it? Staring into its dark eyes, it wasn’t the moon that gleamed back at him after all. It was a twinkle, a promise. Of what, he had to know.

It pounced, its mouth open wide. His back hit the ground. The wolf whispered. It didn’t bite. It was gentle, comforting, as it enveloped him and instead made him whole. He sat up, awake in bed. Like a divine revelation, he knew what he had to do.

The address was scribbled down on a piece of scrap paper in a drawer in his garage, tucked away beneath a half-empty bottle of Jameson—an ancient demon he had conquered some time ago. The address led him to a quaint, single-story, white brick house with a teal door on which hung a spring wreath made of eucalyptus and dogwood flowers. Standing outside the front door, Elias wiped his hands on his pants. Sucking in a deep breath, trusting the wolf that had led him here, he reached out and rang the doorbell. The wait was only a few seconds, but it was long enough for him to consider turning and darting. The door opened, and his gaze lowered, lured down to the woman who had answered. Her dark hair was silky and straight, barely reaching her shoulders. It was different from the long, wavy, slightly frizzy style he remembered.

Looking up at him from her wheelchair, the woman smiled, her eyes alight with pleasant surprise. “Elias?”

“Hi, Charlie.” He wiped his hands on his pants again and swallowed. “I’m sorry. Did I ever tell you that?”

“No, you didn’t,” Charlie answered, still looking up at him with that same rapt smile that he remembered so clearly. She hadn’t changed, even since her world had been turned upside down because of him. “But I forgave you a long time ago.”

“I had to. For myself. I had nightmares for the longest time, but when I decided to let things go, they stopped.”

“How could you forgive me?”

“I was more upset when I never heard from you after that first day in the hospital. We were both drinking that night, Elias. Remember? It wasn’t just your fault.” Wheeling her chair backwards to give him space, she asked, “Would you like to come inside?”

As he stepped into the doorway, Elias spotted the glimmer of a ring on Charlie’s finger. Child’s laughter came from somewhere inside the house. Happiness radiated from his old friend’s glowing face. Fear had made him certain he had destroyed his friend’s life, but really he had only destroyed his own. The door closed behind him, and his feelings of unworthiness faded. He didn’t have to wipe sweat from his palms before he shook hands with Charlie’s husband. Or before their daughter rushed into his arms after he was introduced as Uncle Elias.

The wolf had come for him. But the wolf wasn’t his guilt; it was his absolution.