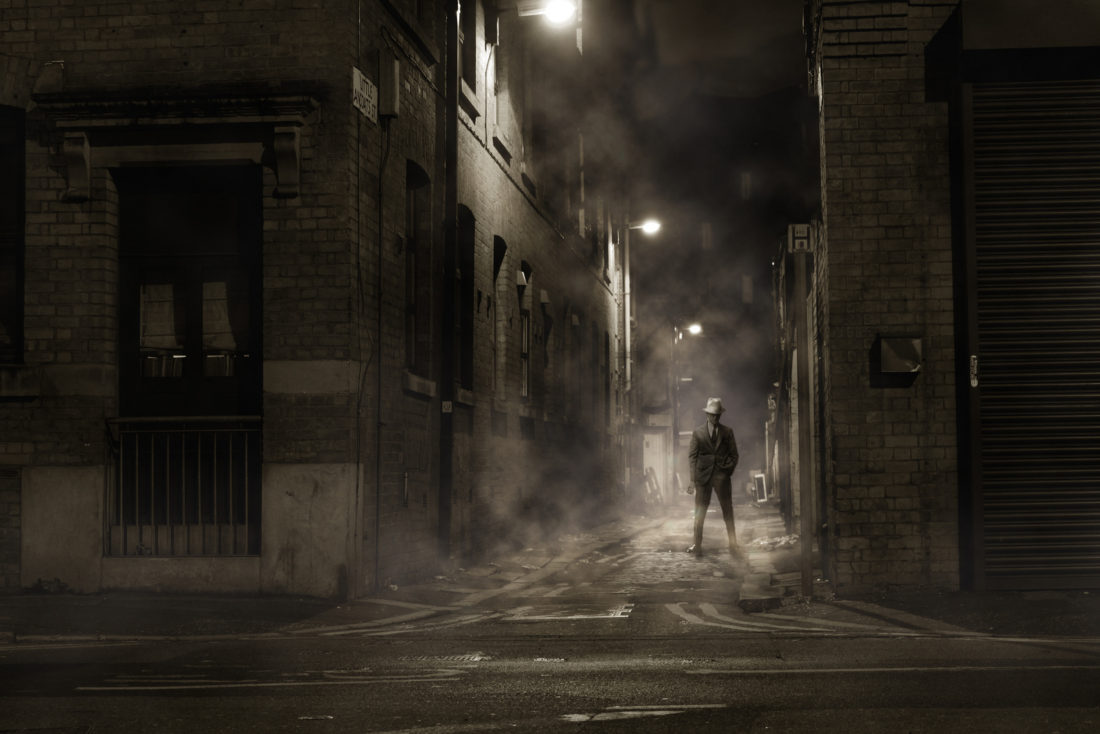 At the Dadaist Detective Agency the typewriter went unanswered and the calls went untyped. Communist Armstrong swiveled in his chair and threw his feet on the desk. He underestimated the distance and they landed on the floor instead. He was wearing gorilla slippers three times too big so his feet were well-cushioned and thus unharmed by the landing which followed their aborted low-altitude orbit. The typewriter rang and Communist answered the phone.

“Dadaist Detective Agency,” he spoke. He also smoked, but not at that particular moment. Though, Communist didn’t believe in time, so technically, he thought, he was always smoking and not-smoking at all times and no times forever and never.

“I’d like to make an appointment.” The voice was human, Communist could be sure of that. Under the influence of psilocybin he’d once heard a cat speak English, but since he’d been unable to replicate the results, he filed that particular experience under anecdote instead of data.

“My afternoon is free, or rather, my afternoon seems to be currently unoccupied by other clients and it appears I can meet with you. At what point in your perception of spacetime can you place yourself at this location?”

“I am standing outside the door right now.”

The door opened as doors are wont to do. It appeared as if John F. Kennedy stood framed in the doorway, but that would be ridiculous. First, John F. Kennedy was living in a New Orleans nursing home and second, only paintings, photographs, and innocent people can be framed.

Kennedy walked into Communist Armstrong’s office much like other bipedal mammals, one foot in front of the other, careful not to step on any cracks, lest he break his mother’s back.

“Mr. Armstrong, I presume.” The words tumbled from his mouth like bricks, denting the desk as they fell, in much the same manner in which the Cockney accent dents the sensibility of Queen Elizabeth’s fragile eardrums. “My name is Joseph Conrad.”

Communist spoke in Chinese, “So you’re not John F. Kennedy. Interesting. Do you have a heart of darkness?”

“No, Mr. Armstrong, I do not. The narrator said I spoke Chinese, but the text was written in English.”

Communist Armstrong found himself strongly annoyed at the narrator, primarily because the narrator assumed he would be angry for making him a fool in front of a new client. Having successfully destroyed the fourth wall, Communist gathered up the bricks that had tumbled from the mouth of Joseph Conrad and reconstructed the fourth wall in order to keep the narrator out of his business.

“I would like to contract you to end the first World War.”

Joseph Conrad scowled like a grey parrot laying an egg, which was white and of comparable size to a walnut. He studied this Communist Armstrong from the Dadaist Detective Agency. Communist was young and old, but only because Joseph Conrad could see in the fourth dimension, and thus to Conrad, Communist was an old man at the front and an infant from the back. “Please, Mr. Armstrong. Do not play the fool. I know about your time machine.”

“Time is money and a time machine would make me a counterfeiter. We wouldn’t want to get the Secret Service involved.” Communist was equivocating, but he was also stalling for time, which was difficult because he didn’t believe in time. It was a construct of the human mind. “Four parts gin, one part lime juice, muddle with raw sugar. Shake.”

“What is that, the formula for the fuel for the time machine?”

“Well, you’re making it awfully difficult to stall and think of a way to tell you I’m not interested.”

“Of course you are; you’ve already done it.”

“Not until you’ve done it.”

Conrad shook his head, frustration running through him like a lubed-up maglev train—immensely fast, but lacking friction. “Apparently a dunce saves the world.”

“Oh, so you’ve found someone else to do it?”

“No, you’ve already decided to do it, or rather you will. My place here is merely perfunctory. When this moment passed through its original formality-of-actually-happening, I was here, I said these things, you said your things, and then I left and you, sir, stopped the first World War.”

Communist Armstrong opened the door to the Dadaist Detective Agency and said, “Then you’ll be going then?”

“Yes, indeed I will. You’ll be needing these,” he said, handing a vanilla envelope to Communist.

“Ah, vanilla, tastes so much better than manila.”

“Those, Mr. Armstrong, are your life. You will be impersonating Archduke Franz

Ferdinand. There is a brief outline of his personality and other important facts. Your job, since you chose to take it, is to not get assassinated on the 28th of June, 1914.”

Joseph Conrad nodded solemnly and skipped down the hallway, singing, “If I were an Oscar-Meyer wiener!”

Archduke Franz Communist Armstrong Ferdinand closed the door and put on his hat. If he was going to work, he decided he should manifest timespace and thus reality in a more stable and tangible format. First, however, he warped the time to the year 1914 and the place to Sarajevo. He sighed deeply, realizing he was going to miss that night’s episode of American Idol.

When Communist arrived in Austria, he was dumbfounded in the most twisted and literal sense: he was found dumb, in the old-fashioned sense of dumb, as in he couldn’t talk, but he could talk, actually talk, but he only spoke English, not Bavarian or any of the other six languages that Franz Ferdinand spoke. Communist cursed the narrator, who—at a whim—could make Joseph Conrad, who looked just like Jack Kennedy, speak Chinese, but wouldn’t allow Communist himself to speak a little Bavarian, to make his job an itty-bitty bit easier.

“Sorry, Mr. Armstrong,” the narrator replied, “but it is a law of fiction: you must make characters you love and then do terrible things to them so you can know of what they are made.”

“Who made up that shitty rule?”

“I think Kurt Vonnegut said it.”

“Bullshit, the Creator of the Universe said that on the seventh day while he was lounging around the Garden of Eden drinking margaritas.”

“Stop talking to me, you’re boring the reader.”

Just then, a guard came around the corner and yelled, “Erzherzog, was machst du da draußen auf der straße in dieser seltsamen kleidung?”

Communist started disrobing immediately, removing his Bermuda shorts, tank-top, and fedora. The guard, who was the spitting image of George Lucas, God have mercy on his soul, ripped off his cape and draped it around the Archduke. To enhance the effect, Communist began quacking like a duck and pulling his scrotum up over his penis while waddling in wide hexagrams.

“This is the easiest job I’ve ever had. All I have to do is let them lock me up for being crazier-than-a-shithouse-rat until after the assassination attempt. Screw you, narrator.”

The narrator, who was beginning to regret creating a character with the ability to see through the fourth wall, arranged for a beautiful woman to walk by at just that moment. The narrator designed her to be absolutely irresistible to Communist Armstrong. She had the lips of Angelina Jolie, the breasts of Christina Hendricks, the ass of Kim Kardashian, the ears of Ernest Hemingway, the teeth of Julianne Moore, the nose of Daniel Radcliffe, the hair of Rooney Mara, the legs of Lily Cole, the eyes of Helena Christensen, the left brain of Margaret Atwood, and the right brain of Robert Anton Wilson, fully realizing that creating a woman piecemeal like this furthered patriarchal objectification, for which he felt immense guilt.

While the guard wrestled to contain Communist’s flailings-about and before the narrator could erase his misogynistic error, this woman, whose name is unintelligible below 80Hz, but whom we will call God, whispered, “In your attempt to thwart your creator, you have forgotten that the key is to ride fate like I would—”

“Get your mind out of the gutter. The real Archduke is around here somewhere. If you’re locked up, who’s going to stop him from getting assassinated?”

“No one, my darling bathtub full of engine parts. If all this already happened, like Heart-of-Darkness said—if I took the job and traveled here, but can still remember World War I, then obviously I failed, and that’s it, it’s done, gone through the formality-of-actually-happening.”

“Good, good,” said God, maniacal laughter escaping from her lips like a cat in a bubble bath. “You fool! Dadaists use illogic and non-sequiturs! We’ve tricked you into using logic! You’ve been undone!”

Communist sighed in triumph. “Just like a man to be undone by his shadowy feminine ideal.”