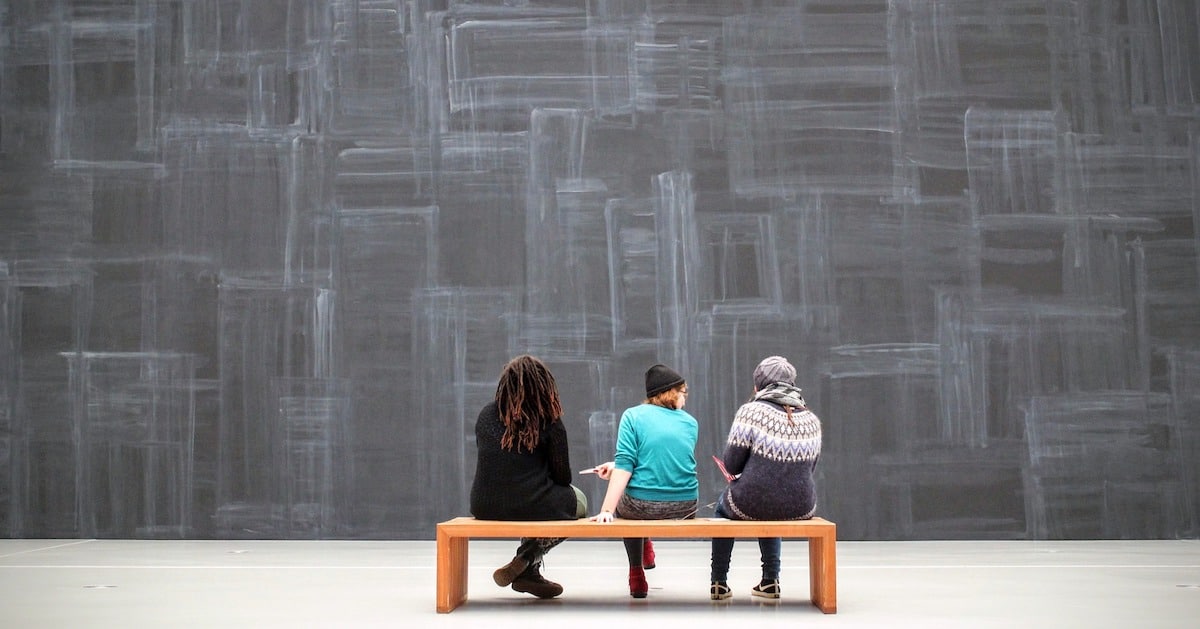 Above: A portrait of Phillip Hillwood painted by the doddering and much-acclaimed expressionist Malcolm Ulrich appeared in conjunction with a breathless story titled “Painters of Promise” on the cover of Modern Movement magazine’s March 12, 1985 issue.

Above: Hillwood made his first trip to France in 1985. He was converted, he said, from Anglophilia to Francophilia in a matter of minutes. “I left the airport in Paris feeling one way and arrived at my hotel in Montparnasse feeling another. I was possessed.”

Top: An intoxicated Hillwood at a symposium in Carmel on “The Future of the Figure in Postmodern Painting.” He and his fellow symposiasts had not come for the topic (which they ignored), but for the seaside sabbatical. Hopkins spoke on the psychology of color; Coleman on the act of painting; and Miller (second from the right), who idolized Hillwood, spoke on Nietzsche and narcissism.

Right: Hillwood working on an irreverent interpretation of Ingres.

Below: Hillwood in front of Seattle’s Pike Street Market. “It is an almost perfect city,” he said of his hometown. “Big, temperate, on the water, and 1200 miles away from Los Angeles.”

Right: Hillwood and his twelve-year-old son, Michael, a budding moralist. Michael kept an eye on his father’s drinking and for a time strove to be his conscience.

Right: Misjudging a leap from a stone wall near his home, Hillwood tore ligaments in his left knee a month before his Winterscape show at the Seattle Art Museum. “I hoped the persistent physical pain would distract me from worry about the show,” he wrote to a friend, “but this has not been the case.”

Left: Michael and his father canoeing on Lost Lake .

Below: Hillwood, Michael, and wife Maureen (in polka-dot dress and unfortunate hairdo) traveled to Milan for the International Imagist Conference in 1991.

Above: Hillwood at age seven dressed as Zorro. This photograph appeared on a Christmas card that Hillwood sent out in 1992.

Left: Hillwood playing pool. He could never pass up the chance to chalk a cue.

Left: Hillwood adored Karen Wheeler. He treated her as if she were a surrogate daughter—a fact that did not go unnoticed (or unremarked upon) by Hillwood’s non-surrogate children who would have welcomed, if even just occasionally, similar displays of affection.

Right: Hillwood and Raymond Perry in San Diego, 1993. Perry, who was famous in part for being unapologetically alcoholic, was amazed at how much Hillwood drank. The two promoted each other professionally and became friends.

Left:  Hillwood at a costume party in the middle nineties.

Left: Hillwood and family with Ben Brett, a photographer, who was for a while one of Hillwood’s closest friends. Clockwise from the top: Amy with Hillwood’s son John, Maureen and grandson Dylan, Michael, Brett, and Hillwood.

Bottom Left:  Maureen and Phillip on a picnic in Oaks Park.

Left: Peter Westbrook spent more than a year working on his profile of Hillwood for The New Wave.  He and Hillwood were friends until June 15, 1999 when the profile was published.

Left: A despondent and conspicuously bare-footed Hillwood in the bleak-chic apartment on Farmington Road where he lived from 1995 to 1996 while teaching at Morton College. “It is the sort of place you might expect to end up if you had been living the life of a petty criminal,” he told friends.

Hillwood, bored with his old Seattle clique, went out of his way to befriend younger artists such as novelist Marc Davies (above) and sculptor Ian Trapp (left).

Hillwood’s seascape Unsettled was sold in April 1998 to the Metropolitan a week before he appeared on the cover of American Painting.

Above: Rebecca interviewed her father for the American Painting cover story. “I would have to say that I have had more than one encounter, Becks, but fewer than seems conventionally imagined,” he replied when asked about persistent rumors of rampant philandering.

Above: Sabia Green and Hillwood study a Matisse.

Below: Hillwood, uncomfortable in his rented tuxedo, presents the Gold Medal of Honor to Jonathan Newhall at the National Arts Club. “Jonathan is for real,” he wrote to Ray Perry. “It has never been about the jewelry for him.”

Left: Hillwood (in his “special” bow tie) receiving an honorary degree from Harvard in June 1999.

Above: Hillwood at the Washington State Fair.

Right: Hillwood won the 2000 National Art Critics Association Award. He appears here with fellow winners Lucy Goddard and Peter Mead. “It is an honor” he said, “but to tell you the truth, when I see someone like me get something like this I can’t help but wonder who on the committee owed whom a favor and for what.”

Left: In 2000 the Italian government provided Hillwood with a nubile young interpreter, Gabriella.

Left:  “I think he’d be better employed plastering sheetrock,” Hillwood said of portraitist Anthony Jackson. “I was worried that he might reveal something about me that I would rather not be revealed, but he has revealed nothing—except perhaps that my judgment isn’t what it should be in that I did not refuse the request to sit for this.”

Left: Carving the Thanksgiving turkey was a ritual that Hillwood took very seriously.

Above and left: Hillwood never cared for public lecturing. He did as little of it as he could. “I suppose it is good for me—like exercise; but, like exercise, I find myself avoiding it whenever I can,” he said.

Right: Hillwood in a convertible that he bought with proceeds from the windfall sale of Tintoretto Paraphrase.

Right: One of Hillwood’s consistent complaints about Phillip Shelly was that his “important” pictures were programmatic, that they “invariably contained three female nudes and something on fire.”

Below: Chloe Hunt, one of Hillwood’s young distractions, was drunk when she drove her car into the corner of a convenience store. Hillwood paid for dental work and for the surgery that restored her nose.

Left: Hillwood and Rebecca shortly after she published her first novel, Whatever Happens. Hillwood was relieved to find that he was not in it, that the heroine’s father was a documentary filmmaker with a passion for social justice and not (as he put it) “a difficult old dauber who was impossible to deal with.”

Right: Hillwood in the fall of 2002. He had been diagnosed with cancer three weeks before.

Left: Dogs were always a great comfort to Hillwood.

Right: After the funeral.