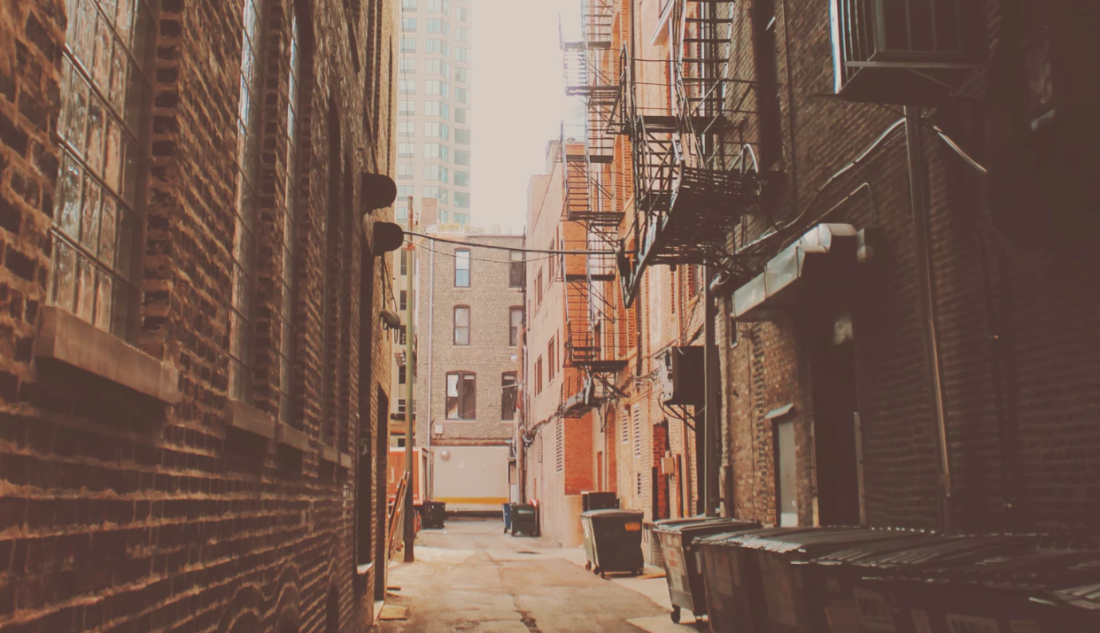 It sounds like a sack of concrete hitting the pavement. No life. So I get off the couch. Stand still for a moment. Listen to the curses being yelled down below. Haha. That’s more like it! Familiar sounds for under this window. This deserted street. This crumbling building. Everything is good and just.

But the air Stan. You know it’s not right.

So I approach the large windows. And both panes of glass are already open. But I can’t see where the commotion is coming from. So I slide the screen out of the way. Lean my torso over the ledge.  The aluminum track cuts into my gut. No bother. I need to know what the fuck is going on down there? Who the hell is causing such a stir? And where is this sickness in the air coming from?

First thing I see. Some kook up the street. Stomping around in a circle. Waving his dark hairy arms in the air above his dark hairy head. His face flushed bright red. About to burst. His saving grace. The only thing preventing this. Alleviating the pressure. Is the constant spew of gibberish coming from his mouth. Nothing coherent of course. Total raving madness. Peppered with vile curses. It’s quite a show. I’m hooked.

His histrionics are impressive. But they don’t come close to explaining that awful sound. That film of disgust that comes with every breath. It’s in my nature to imagine the worst. A motorist speeding off. Laughing. Some little kid laid out in the road. An innocent life slipping into the ether. My tears are ready. Standing at attention

I look up the block. To where the maniac is focusing his anger. But there’s nothing to warrant such an abusive outburst. Only cars parked calmly along the curb. No prostrate child bleeding anywhere. And other than the yelling. Which to me is like the song of a bird on a branch outside a country kitchen window. It’s relatively peaceful.

But the air. Good god. It’s so heavy. Like the funeral of someone you’re not ready to lose. So I scan up and down the street again. Along the row of cars parked at the sidewalk. And there is something. Which at first. I take for a shadow. A small one pure black in the larger grey shade of the building. It grows in a demonic fashion.

Aw, I say with a wave of my hand, it’s nothing, just an oil spill.

Which I know in my laboured heart to be false. So I look closer. And my eyelids begin to flutter. Some inner defense mechanism trying to spare me the horror. But I override it. The scene comes into focus. The black shadow fills it lungs. I make out legs. Eyes. A shiny fucking coat. Then like the man in the street. I let loose with my own incomprehendable string of violent threats against god and nature. Because lying there. Not moving. Is the biggest fucking dog I’ve seen in ages. And the first with a three litre pool of blood seeping from its asshole.

Unprepared for this fucking tragedy. My legs go weak. I teeter. I’m only on the second floor. But it’s a long way down to the cracked sidewalk from here. And if I fall? I’ll be broken and bloody. Like that fucking dog. My own asshole unable to stop a deluge of warm blood from flowing out into the street.

So I lean in. Shut the screen against the horror. Then turn my back to the window. Sliding down the wall to the floor. Anything to get away from what’s out there. And to give my weak legs a rest. I curl my knees up to my chest. Wrap my arms around them. Minimize the shaking.

I sit curled up for I don’t know how long. But through the screen. Voices blow in on a breeze. The sounds of a crowd. And when I lean back out the window. There’s about twelve people. Hushed murmurs. The kook from before. He’s in the centre of it. Still mouthing off. My french ain’t so good. And all I pick out from his shouting are words like chien and tomber. While he points to the windows of a place down the hall from me.

A small car stops. It’s horn honks. When no one moves. Or gives a fuck. The owner steps out. First full of anger. Then he halts his procession. Face white with a fear of death. And I bet you I’m wearing the same blank expression. Because if I understand the kook in the street. That dog fell from a window. Same as I’m leaning out right now.

Well shit. There’s no stopping a cold shiver running up my spine. Or my head going light. I start to sweat like right before I barf up a whole days worth of food. How in the fuck does a dog fall from a window? I understand they’re not graceful beasts. But this is more than I’m willing to fathom.

Then like the old steam whistle at the end of the day. A gasp goes off through the crowd. I focus back to where the dog is laying. And the fucking stupid thing is trying to make a go of it. Like it still has a life left. God. The urge to survive is only stupidity with a better name.

All the same. I root for the little fucker. I like to see adversity conquered when the odds stacked high. So like the crowd below. I watch with rapture as the dog prepares itself. Positions its front paws. Heaves it’s fucking massive head up off the ground. There’s something majestic in it’s movements. And I feel like anything is possible.

But that sense of hope. Of foolishness. It’s got a second or two at best. A fight that can’t be won. Because the dog comes crashing down. Slow motion disaster. Its chin hits the concrete with a sharp crack. Made sharper by the silence. Then just like that. The world is a fucking cesspool again.

And if they ever were feeling high. The crowd below sure isn’t now. Some of the weaker ones tear up. Bawl like children. It’s embarrassing. None of them have a clue what to do. No surprise. Neither do I. There’s no emergency number for lower mammals. They’re expected to die quietly in the streets. Surrounded by gawkers.

But at least they get to see the sky as their soul returns to dust.

A woman comes full speed around the front of the building Her long dusty blonde hair flowing out behind her as she runs. Tears streaming down her young checks. Gagging on her breath. I’ve never seen her before. But I take her for the irresponsible owner.

She starts shouting. Oh my god! No, no oh no! And unlike the others. She doesn’t hover around the edge of the puddle. She walks straight in. Like it isn’t there. Drops down to her knees. Soaking her ripped black jeans in it. She’s sobbing. Wailing. The dog moves its head towards her. A slight recognition. Or annoyance? The woman strokes the dogs fur. Takes its head in her lap.

The young woman looks up at the crowd. Her audience. Through her tears. Which stifle her words. She starts begging. Putting on a show of it. Total body convulsions. Trying her god damndest to evoke some kind of emotion from these fools surrounding her. Won’t somebody help me, she implores, I need to get him to a vet. A sheepish voice in the back stutters as it offers to call her a cab. And another says they’ll never take a mess like that.

I watch as the man who stopped his car to gape slowly slinks away. Then silently drives off in the opposite direction. Before anyone suggests he helps. And get his interior bloody. Haha. The snake. Doesn’t he understand? A little club soda and his backseat’ll be good as new!

His departure starts an exodus. Shows over. One person hangs their head. Leaves without saying a word. Then two more. Before I can blink half the crowd is gone. Maybe not forgetting the mess in the street. But certainly pushing it to the back of their minds. A story to tell at a party. When the awkward silence gets to be too much.

But those fragile souls. Too weak to stick it out. They’ll never know the final act. What us sadists call a treat. Or justice. Because the dog. Affected by the massive loss of blood. No longer about it’s wits. Mistakes the owner for an enemy. And takes a hunk of her arm between its teeth.

Before she feels the pain. And starts screaming. I can hear the flesh tear. Then someone frantically yelling there’s been an accident into their phone. The young woman pulls away while shedding her sympathy. The dog goes limp. A siren wails as it gets closer. I slide the screen shut. Laughing to myself.