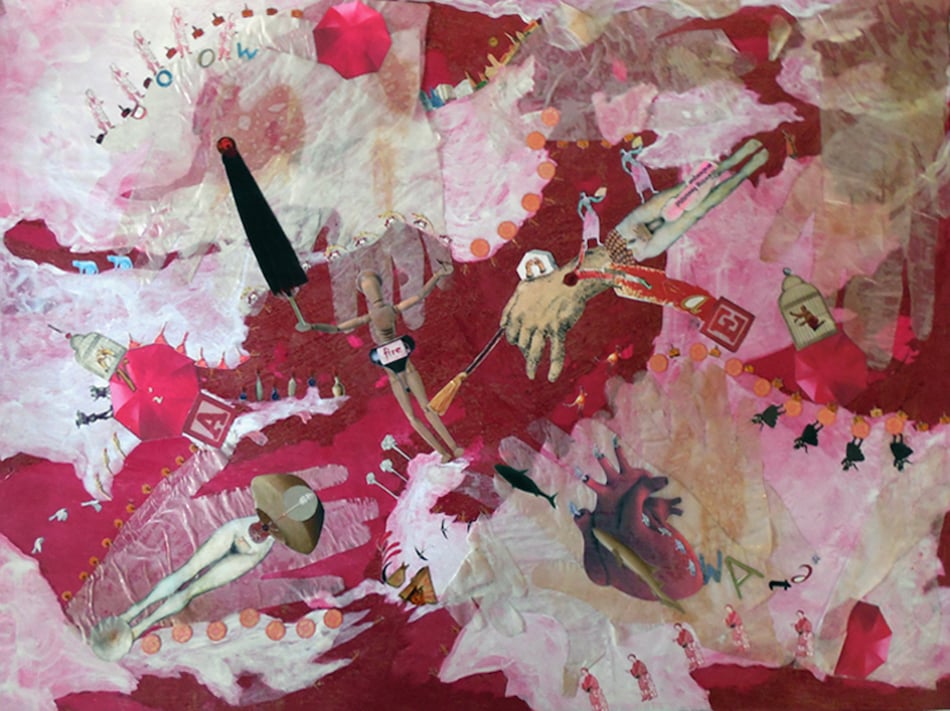 Once, I tried to describe sex
to a stranger. I was drunk and he was
watching a baseball game at the bar.
I said sex was an extension
of bodies in a dark room, one soul
climbing into another, a tree house
inside a bed. I used those words exactly,

and, afterwards, walked twenty blocks
out of my way to reach home.

It was night, and the city hushed
between the rushing of cars
for little seconds that seemed to span
another person’s lifetime. I could be
alone forever and enjoy the bold lines
with which light moves
and not have to share this with anyone.

While walking, I thought of how
my father used to stand behind me and place
his hands above mine to show me
how to grip a bat. I used to be scared
he wouldn’t be able to teach me everything.
That, older, I wouldn’t know how
to wash my clothes, cook red meat,
or not die alone. When my mother left,
I saw how a thing could fail so tiredly
it doesn’t even rouse a flame.

The stranger remained as strangers do –
quiet, nameless, seeming hurt,
and I realized I’d been speaking too loud,
and suddenly, and much.

Now, I wish my father were here
to buy me a drink and tell me
that the woman who left me will come back
better, or worse, or, simply, the same,
the way I want her, unchanged by me,
but I know he is too old
to have to tell the truth, and I know
the truth is

she doesn’t have to, and never will,
that we will both go on forever
watching the light stretch over roofs
under the thin blue sheet of sky
and give it different names
to share with different names.

I want my body to be cradled
by something more than a bed.

Before I go on forever, I want this.
One hand over my own, over
and over, until the light goes out.

Your story unfolds, you,
fumbling your coffee on a train
moving riverside somewhere far north
of the city.

You bought the ticket in haste,
wanting to be lonely
the way you imagined as a child
a ship’s mast, and the man
on top, eyeing the night shift into a dark
that, slow and oil-kissed,
seemed to be disappearing, or appearing.

What can you say
that has not already been said
among strangers?

It is not the Cheyenne you wanted.
Not the journey west, the truck stop diner
wearing its sorrow. You stay on
for over an hour. The river widens.
You think of the word fjord,
the confusion of a mouth, a first
kiss years ago. How she didn’t open
her mouth wide. How it was that
and that alone that fumbled a sweetness
into the air. The river

widens like a mouth. Most everything
that receives you will leave you someday.

And you guess, sigh, murmur,
that is it. And you lean your head on the window
as the sun golds the river into melted butter
and imagine a years-from-now,
a repetition of days, a kiss a kiss a kiss.

You could do this forever.
But there is a last stop, a doors-opening,
a man tapping you on your shoulder
to ask you to leave,
and you walk out into a place you’ve never been
away from the town that idles like a stalled car
toward the water, where downwind
three children and their voices singsong
like drip coffee on a steel drum,
and you think maybe this is it,
a high rock to sit on, a night
that seems slowly to replete itself
with past nights, a lost love, a sorrow,

Devin Kelly earned his MFA from Sarah Lawrence College. He is a co-host of the Dead Rabbits Reading Series in Manhattan. His collaborative chapbook with Melissa Smyth, This Cup of Absence, is forthcoming from Anchor & Plume Press. His poetry, fiction, and essays have appeared or are forthcoming in Drunken Boat, Gigantic Sequins, Armchair/Shotgun, Post Road, The Millions, and more, and his essay “Love Innings” was recently nominated for a Pushcart Prize. He works a college advisor for high schoolers in Queens, teaches English at Bronx Community College, and lives in Harlem.