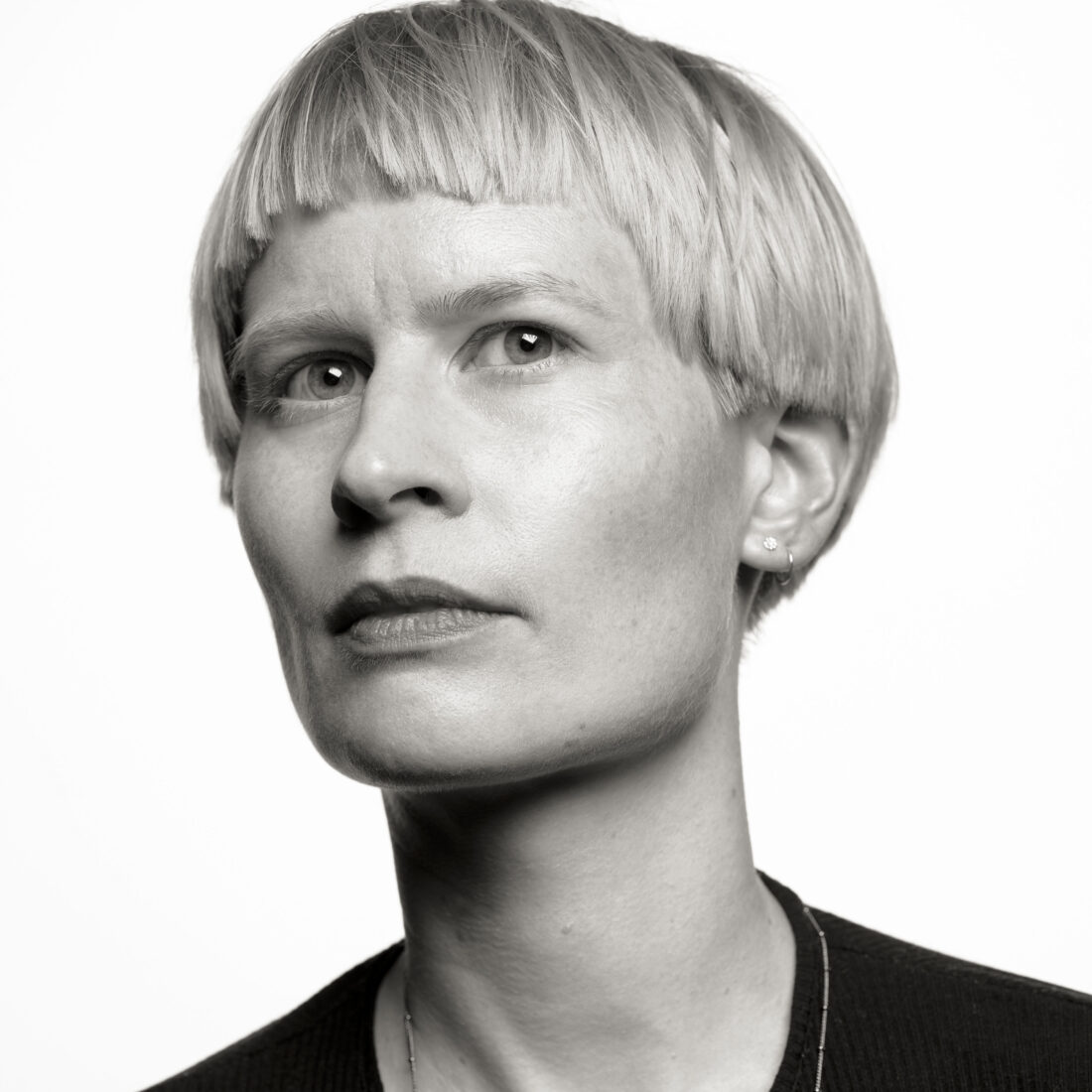 Our Mother Tongue Creates Displacement: An Interview with Jenny Hval

Jenny Hval’s Girls Against God reads as an imagistic compendium of surrealist cinema and subcultural manifesto. The text follows a self-proclaimed provincial goth from South Norway’s Christian belt through different stages of girlhood and adulthood, spanning the early nineties and present-day. Our narrator, consumed by her hatred of God, takes stock of her culturescape, while simultaneously trying to disentangle herself—from its whiteness, theoretics; its linguistics. But perhaps what’s most striking about this book is the boundless tap of energy in Hval’s observations: What’s the point of confronting anything at all in Norwegian society? Can art express rebellion in our time? If there’s anything at all that might still have a subversive effect, what would it be? These questions firework, shifting the narrative into focus.

Girls Against God is a high-wire act, but Jenny Hval walks it with poise; sustaining energy, perspective and enthusiasm while covering a lot of ground.

Below, I speak with the author about her second novel, what magic means to her, and life in quarantine with her young puppy.

Hi, Jenny! Thanks so much for taking the time out to chat with me! Where are you writing from, and how are you holding up?

Thank you! I am at home in Oslo, watching over my sleeping puppy. Puppies don’t always know when it’s time to sleep, so I have to work hard for her to get some rest.

We haven’t been completely locked down here in Oslo, so it’s been an in-between situation. Right now we are on social lockdown, but I’m with my puppy anyway so I’m just socializing with her, and grass, leaves and garbage.

With my work, I’ve been unable to do all my shows I had planned. I had tours everywhere and they were all cancelled. I was lucky enough to get to play two really interesting shows here in Norway, though.

With writing, I thought I would have time to do a lot of work. But it’s been really hard. I don’t think it’s easy to be productive at this strange time. You can pretend… or at least I pretended… that I could go underground and write a lot just because I have nothing else to do. What I wrote was so unfocused. Now I can’t really work, since the puppy is so small, but I can spend my time cleaning up after her productions, like throwing out torn up toys and picking up poop. I pick up poop and think to myself, this is her production, this is her writing.

Your third book, Å hate Gud, was released in 2018, but the English translation, Girls Against God, just came out this past October from Verso Books. How distant does your work feel from its original publication date? Do you see the translated version of your work as your own, or do they feel like two separate things to you?

It’s no longer completely my own, it’s a shared work between me and my translator Marjam and the reader, too. Not that much time has passed, so I really enjoy it being out in English already. My older book Paradise Rot took a decade to be translated, and that was a much more surreal experience for me to witness. Positive, though.

Could you tell us a little bit about the beginnings of Girls Against God? Was this project something you’ve had in mind for a long time, or can you remember when you first thought about writing this book?

I didn’t think this would be a book until I had written quite a lot, actually. I wrote something that I thought would be a film script for my album co-producer Lasse Marhaug’s first film. I don’t think the book would have been so adventurous if I had set out to write a book. I remember I got the idea that it could be a book as well as a script in December 2016. But the angry girl protagonist did not appear until I had written a lot of the other scenes.

How long did the book take you to write, from start to finish?

Probably around two years. It was challenging to get time to work because I am fortunate enough to be asked to play many shows, and for a while I toured way too much. In the process of writing Girls Against God I felt like I finally had a valid reason to cut down on the touring. I love travelling and I love being on stage, but not as a 100% lifestyle.

A lot of your work coalesces around capitalism and patriarchy. I’m curious: given the events that continue to transpire this year, has 2020 steered your art and philosophy in a particular direction?

Right now I think my work has just been unfocused and difficult to validate. I have spent a lot of 2020 rethinking whether I should really use my voice at all. So many other voices are more necessary than mine, and I find the culture of having to express oneself all the time and being productive more and more problematic. We all need to spend more time listening to others, other perspectives.

What does the idea of ‘safeness’ represent to you in art and literature?

I don’t think I can answer that fully, I feel like there’s something behind this question, your own perspective, that I need to understand. I didn’t know safeness was a word, but I can relate it to hope and belonging, perhaps? Community? To be heard, seen, understood? I feel safe and inspired when I encounter art that is.

Lately, there’s been an emphasis on creating a “safe space” in literature—many readers come to a book hoping to escape into a world where they feel comfortable and stable. A lot of the work and artists referenced in Girls Against God, such as the 2001 film Suicide Club, Jenny Holzer or Hellhammer, for example, destabilize their audience. Do you feel it’s the artist’s responsibility to ensure that their audience feels a sense of safety in their work?

I’m still not sure about what you mean by this question – because who is meant to be safe in that space? Is there a space that is safe for all? I find that the witches in GAG are somehow trying to create a safe space for themselves, and perhaps others who feel like they are in opposition to mainstream to society (not everyone in opposition, but perhaps some?), by tearing down the regular space/ city of Oslo/ the meaning of a character in a Munch painting, etc. That is what magic means to me—to create something else by deconstructing something self-explanatory, normcore, normal, or sensible. Does that help? (I mean, even Hellhammer, Norwegian black metal, or the Friedrichshof Commune, were intended to create safe spaces, right?)

In Girls Against God, the narrator eschews fundamental Christianity and its surrounding culture— “When they say ‘I’m a pRacticing chRistian’ their guttural Rs make it sound as though the consonants have gone through purgatory”. Early in Paradise Rot, Jo seems to find the English language similarly grating on her throat — there’s quite a thematic overlap here. What keeps you writing about identity and displacement?

I guess the link here is language. It doesn’t fit anyone, does it? With both of these books, I’ve been researching my own relationship with my mother tongue, because I write song lyrics in English. I have found this process really interesting, as I have always been reading so much, from a young age. I think language as we learn it, our mother tongue, creates displacement. It teaches us “that thing there is a dog”, “that thing there is a man/woman”, etc. Language is violent. Which is why I need the characters in my writing to experience it very physically.

How do you feel about the term ‘autofiction’ in reference to your novels?

I hate it, but that is based on the region-specific Norwegian literary discussion around the term (and an absurd ongoing court case here which I would have to explain over at least 20 pages). I think it’s too simple to call anything autofiction. I would definitely not call my work autofiction. To me as a writer, it places too much emphasis on origin and truth (which smells of alt-right rhetoric to me), and too little on the exploration of form and content. It’s a bit Is That All There Is?

That doesn’t mean I don’t love the tradition of using autofiction to create outstanding literature. I just know that if I think of my work as autofiction, I will stop writing. Perhaps it’s my generation – when I released my first album in 2006, I felt like a lot of (mainstream music press) reviewers would describe any female artist’s debut as “diary writing”, lessening the value of the work intentionally or unintentionally. And in the process, basically telling anyone with a different POV that their work can’t transcend reality, that your work is glass-like and transparent (“you just need to get laid”, “you just want to be loved”, etc etc etc) unless you conform to the norm of “good art” or whatever.

There’s so much to love in your work, but I find myself especially drawn to the dreamlike imagery in it. I’m thinking of the snow in Girls Against God, the transformation of apples in Paradise Rot, and I feel compelled to ask: do you maintain a dream journal?

No, I have never done that, but I admire the people that do (I love how Helene Cixous describes her dream diary)! I think I’m good at inventing dream content, because I never really describe actual dreams in my work. My actual dreams are too generic.

Do you have a ritual when it comes to writing—a specific time, or day, or perhaps, a particular space where you prefer to sit down and write?

They are dull, like going to the same café every day early in the morning, where they play music I don’t like so I have to focus. I don’t really have time for rituals, sadly, as I have been writing my books so far in-between tours and other work, so it’s quite random when I have had time.

What are some of the books you’ve read and loved recently?

I have almost entirely read dog books! My favourite is the Norwegian classic On Talking Terms With Dogs: Calming Signals. It may sound stupid but I think everyone should read about how incredible dogs are to avoid conflict and calm down their environment. I cried reading it. If only people could do the same.

Could you tell us a little bit about what you’re working on at the moment?

I am working on getting my pup to calm down and rest. So I try to play a bit, go for short sniffing explorations in different places, then do calming exercises at home or give her things to mentally stimulate her. All to make her sleep, really. My hands constantly smell like chicken or liver treats. I am also working up my courage to cut her dewclaws, which are very long, but this frightens me.

Lastly, are there any independent book or record stores that you’d like to recommend to our readers?

My favourite record store in the world is Exiled Records in Portland, Oregon. My favourite local bookstores here in Oslo are Tronsmo (old classic) and Cappelens Forslag (small gem, I hope they survive the pandemic. Will any independent store, venue, bar, restaurant?)

Girls Against God is published by Verso Books, and available wherever books are sold.