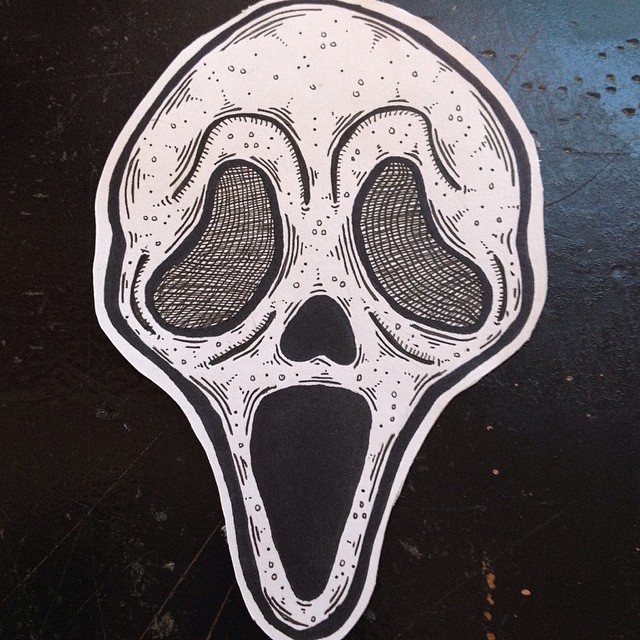 Begin with death solidly
buried in subtext. The suburbs
will disturb themselves with boredom or (worse)
entitlement. All we need remember is how to remove
shadow lattice from our own eyes.
If we can see it, it won’t be
as scary. Watch for sea change.
The killing. The curfew. The arrival
of harsh reality. Your fence painted white
won’t stop the change of seasons
nor will it save you from scythe or knife
or Justice when she warps in the hands
of a boy who thinks he knows better.
Climb to the roof. Look down
on what we’re losing.
What we never dead-
bolted. The safety we can’t
keep permanently safe.

Blame is a child requiring
a village. Blame won’t know
what mother’s skirt to tug. Blame falls
& skins his knee & wants a kiss
where the blood is coming. Can’t you
undress gravel from the wound
more quickly? Blame has already fallen
down a second time. He’s the one
nobody pictures carrying past
infancy. See how many arms he has
( the better to climb you with ) see
how many trees he’s scarred ( the better
to poison the ground ) see how he’s already
a man in stocking feet in your home
like he’s lived there this whole time.
Like you brought him back, same bag
as all the bruised produce. An apple, a kiwi,
this child you forget you fathered & refuse
to rage at or raise. As if he was born
where you forget your own impermanence.

The horror doesn’t live in the harm
done to the ones dying. The horror lives
in how fear emerges from a secure chrysalis.
Immortality is a foolish assumption & a resident
of every small town. They breed news crews for it.
Grind lenses. Paint on new mouths & focus their speech
into a fine burning point of light. In the next segment
all of us have gone bloodless. If you change the channel
the song remains the same. Hidden madness. Afterburn.
How could this happen? Here, where we plant perennials.
Kick our wives when no one’s watching. The horror
of us pretending we’ll never be caught if
there’s always something worse to notice.

You could call yourself a tangerine

in years: a teenage you rolling her eyes so far skyward

in cloud flannel pajamas. You dream with a switch-

friend of the brooding one. Bam, bitch

goes down, doesn’t she? One who doubles

neatly over a shoulder. Barely kicks. Such a pity

you’re folded in half, unspeaking. Go back.

Back to black hair & the car in a desert. You could

You could be hallucinated. A dream in neon stroboscope. You dream

your boyfriend practiced killing you & couldn’t.

Knew he was too perfect. Be your own premonition.

Change your name to Paige. Skip to where you were

a witch. Lipstick on before the gloaming. Every season

the season of the crop top. Sure, you get splatter

movie killed by a garage door but a superbitch can’t really die.

This is the opposite of pity, Tatum. You’re the only one

to go without the knife. Casey Becker got confettied

& spit from a tree branch like a wasp’s nest. It must sting,

fear that high-pitched. But you wouldn’t know. You dream.

You insult. You, none of their damn business. Streaked mean

perfect girl. I scrub past the set-up to your scenes. Nice welt,

sweetie & I thought you dumped her for me & I promise

I did & will, promise to hallucinate you tapping Stew on the nose

with that lollipop & then you shimmying through the garage door

unscathed & then you coming back as pain, as citrus

slipped into all the killer’s cuts.


Certain physical responses
can be bred out of the body
over time: your gag reflex, the impulse towards
morality. All left behind if you know how
to try. Carve yourself down
to your worst impulse.
Do you want to kill
or do you like to watch?
How many times can you lie
knowing every time’s an ending?
The past is over, the future narrowing
to a hair’s breadth. They’ve studied the brain
& called it incomplete until long after high school.
We still have time to survive
our worst selves. When you’re raised
in a forest of serrated teeth
weakness becomes a victory
for anyone who isn’t you.
When you’re raised on the blood
of stones, you convince yourself
how rare it is to survive anything.
What a prize you become for suffering.
Escape the killer & you’re immortalized.
Cursed or blessed, but who cares?
Fame is fame. Even when it’s built of bone.
Even when you’re the thing they’d burn
to put the nightmare to bed.

Emily O’Neill is a writer, artist, and proud Jersey girl. Her recent poems and stories can be found in The Boiler, Horse Less Review, Pinwheel, and Washington Square, among others. Her debut collection, Pelican, is the inaugural winner of Yes Yes Books’ Pamet River Prize and she edits poetry for Wyvern Lit. You can find her online at http://emily-oneill.com or @tabernacleteeth.