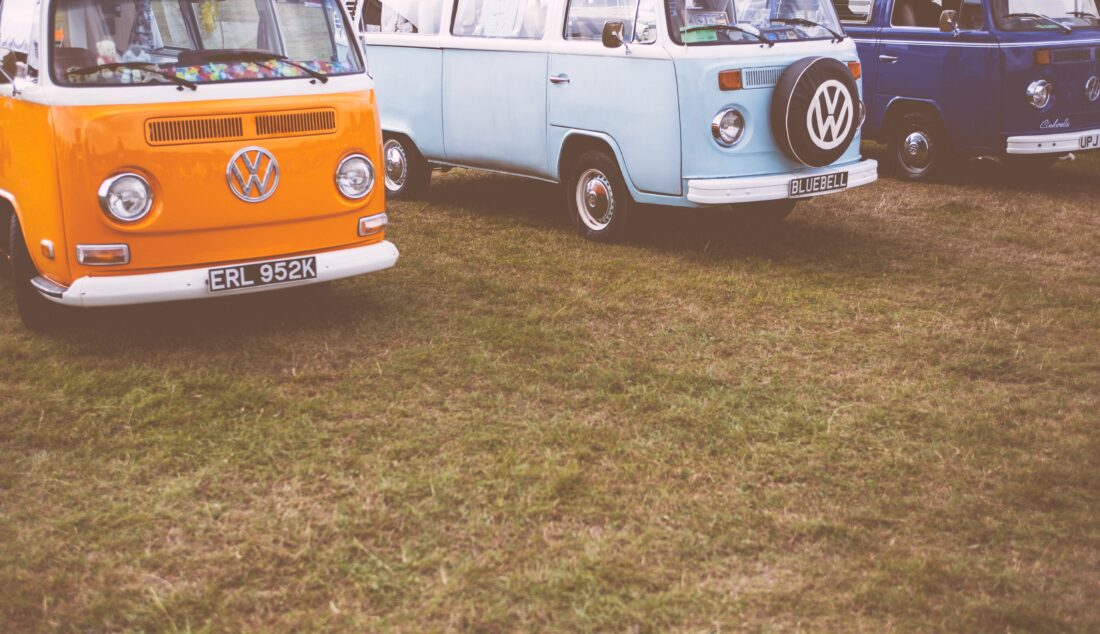 The moon is a sort of carcass. Don’t you think? It was God or a lover of God. Now she’s just an empty yellow thing, she said.

It’s not exactly yellow, I said.

It doesn’t matter, she said. That’s not the point.

We’ll be there soon, I said. But she had already fallen back asleep.

As we drove and she slept, fully reclined and wrapped up in her old navy blue blanket, I couldn’t help but think she was right. The sliver of a moon just above my right hand was awful yellow and awfully dead. And around it, above the long desert blackness, were its old friends. Small bits of starlight that swirled and reflected shapes on her pale face.

We had been driving toward the earthwork for what felt like weeks. A sculpture in Northern Utah butted against an ancient, anomalous, salt-rich lake. My old yellow car slumped from rest stop to hotel and through tunnels and over red mountain passes. She sang songs I didn’t recognize at the top of her lungs. Always about some sadness, some distant life. They made her laugh and in her laughter I was wide awake.

We moved from motel to motel, lake towns and wooded mountain byways. Each room was the same — in spectrums of disrepair and cleanliness. Spectral hostesses and maids directed us. Just out front, they’d say, sorry for the water damage, soon to be repaired. Coiled stairways led the way, barely enough room for our luggage. I watched her feet and she watched mine and we were happy. The mildew and bleach smells didn’t bother us. Off the road for a night, sometimes two. We’d make love and fight with such fervor and intensity that if not for the seclusion of these small hilled-in hotels we may have been dragged to the town square and burned as witches. To be free of the confines of our car we couldn’t help but scream in passion and sometimes even try to kill one another.

We found the turnoff leading to the desert art, an old dead road, at near midnight. The right headlight freshly shattered. Roads out here are treacherous and to miss a turn meant being swallowed up. She was asleep and the nighttime played tricks on me. The goldhue of the moon flickered grey then black as clouds covered and uncovered it. I touched her face more than once to make sure she was still alive. What a thing to worry about, I thought.

We arrived and parked above the earthly monument. The place she had circled on a map so long ago.

She yawned and stretched and smiled and we kissed.

She led the way and I could hear her heartbeat. A sort of tic-tic-tic that clumped together with each step she took. I looked back at the car only once. Even in the darkness I could see the dried blood. My mind filled in the bits of viscera. She grabbed my hand and told me not to worry.

Laid out in the desert at the edge of an ancient lake was the large spiral shape. A collection of volcanic rocks placed decades ago in a coiled arrangement. To find it unknowingly would be to find the fossil of some primordial terror. Instead, it’s just art. Only just visible by the pale light and the strange luminescence of the place. Some kind of pure alien landscape crashed to earth. Crystalline forms grew and pulsed and shook in the night air.

We sat above it in awe before walking its circle to its center. She hopped from stone to stone and looked over her shoulder and pointed out constellations and quiet night time bugs. I watched her closely so as not to be left behind.

We made our way to the lake. A remnant of a once-ocean, she said. That’s why there are so many dead birds out here. They had hoped to find food. They smell the salt. They see the purple rising and they think that this is paradise.

And they were right, she said.

We sat for some time without speaking. The only noises were the yawning-groaning of the crash of waves. I heard once that in times of desperation mariners have been known to drink salt water. Convinced by albatross and mermaids that it will quench their thirst. The more you drink, the more you splash it across your face, the farther from satisfaction. Soon, unlucky mariners are nothing more than dead, dehydrated forms. Capsized and digested, if not preserved, in the ocean’s gut.

The coyotes made their noises. A faint yip that echoed off the distant hills. At moments they were just behind us, walking the spiral as we had done. A type of worship, I thought. Then they were above us, carried by lost seabirds, stolen away from their dens, just beyond the settled mist of night. It never scared her, their cries. She never even twitched. And if I was afraid I can’t remember.

She took her clothes off and folded them and laid them on the shore. By now the sun was rising behind us. The water was burning. Metallic red bore up from its depths and met and turned the pinkish sky blue. The water foamed at her ankles, her knees, her hips. Soon, she was consumed by still waking clouds.

Her body became a large shadow of itself, reaching skyward. She arched her back and I yelled for her to not completely submerge. She was already falling. The water, once red, devoured her in white reflective crests. How did the sun rise so quickly? I thought.

The day before we found the desert shape we hit a deer. Somehow I watched it all unfold from above. The fawn, slick brown fur with small white-yellow tufts around her legs and ears, moved slowly. It was early morning and I watched her shift through mists of black dirt and fog. Her small feet touching the earth, checking as if she feared some demon had turned the solid ground to swamp. Her small red eyes moved across the plains behind her, checking the horizon for—what. Her family? A pack of wolves? The poor thing. Our tires screeched and buckled, but it wasn’t enough. I swerved. Her sudden quickness, her floating — now here, now there. We hit her head, thank god. Crushed into a plume of blood and bone. Erupted. Instantaneous death.

Somehow I watched from above.

Is it dead? she asked. Of course. The impact. I saw the whole thing, I said. How can you be sure? We have to check, she whispered. I can’t. I know, I saw it all, somehow from above, I thought. We have to be sure, she said. Then what? I asked. Then, she said, if the poor thing is truly dead we move on. If not? I leaned forward. If not, we have to kill her, we have to put the poor thing out of its misery. She nodded all the while as she spoke.

She left the car to check and I cried. I looked at myself in the mirror and wept as if the whole world was ending. Crashing and folding and disappearing, the whole universe.

I walked slowly and pictured the animal still living. Maybe even standing upright, I thought. A stained glass window where its head once was. The horizon and storm clouds covering the sun uncovered by the large hole in its face.

The desert on both sides of us expanded into nothingness. I felt cold. I felt infinite misery and dragged my feet. Already I saw, I swore I saw, vultures making figure eights above the carcass.

She was silhouetted above the animal. Hands on her hips. Her right foot tapped and I let the rhythm guide me, but I walked so slowly, so terrified to see the dying thing. I swore I could feel its death — in my stomach, my toes. I touched her shoulder and her body softened. She whimpered and turned and held me. The sun was unmoving above her head and in the distance, just above a red hillscape, were the beginnings of the moon.

The deer was dead. Bits of life still worked through it in spasms. Its hooves and small tail twitched. Its head was gone. Clean, as if a plucked up flower. There was blood and matter which I couldn’t recognize and tried not to ponder on. Yet — a cleanliness persisted. An innocence in the body of the fawn. Fetal shape, its legs tucked under. A nap, I thought. It seemed miraculous. Absolute perfect timing — a perfected collision course that had been building since earth’s conception — for its head to be gone like that. Disappeared. I reached down to touch the thing, to feel its velvet, but she stopped me and whispered, no.

and we drove away and toward the spiral circled on her map.