A writer from the D.C. suburbs who currently draws most of her inspiration from 80’s synthpop, female-driven horror movies, and roadkill. Her work has been honored by the Scholastic Art and Writing Awards and the National Student Poets Program. She currently serves as a poetry reader for The Adroit Journal. Her poetry has appeared most recently in TRACK//FOUR and Alien Mouth, while her journalistic writing is forthcoming in Hooligan Magazine and Vinyl Me, Please. She is an undergraduate student at the University of Virginia, where she hopes to major in English and History. 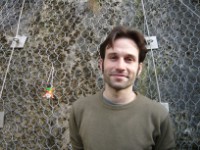 A 31-year-old Frenchman who makes a living teaching English in Nantes. He writes all sorts of things, from realist fiction to weirder stuff, and even though he hasn’t written one in a while, he has a few poems out there he’s quite happy with. He’s a brand new dad, and so he’ll have to work out a new schedule if he wants to keep his writing thingy going. His writing has appeared in Tin House, Paper Darts, Liminal Stories, and Unsung Stories. His first short story collection, Eternal Dreamers of Greener Grass, will be out in early 2018.

She’s been a wilderness ranger, a children’s librarian, and teacher, and hasn’t quit believing in magic. She’s also a 2017 Pushcart Prize-winning writer and the fiction editor for Broad! Magazine. Her fiction has appeared or is forthcoming in The Toast, People Holding, Hobart, Cheap Pop, Lightspeed, and elsewhere. She received her MFA in fiction from the New Writers Project at UT Austin, and attended the 2016 Clarion Science Fiction and Fantasy Writers’ workshop in San Diego. Her debut magical realist YA novel, Hole in the Middle, is forthcoming from Little, Brown in the summer of 2017.