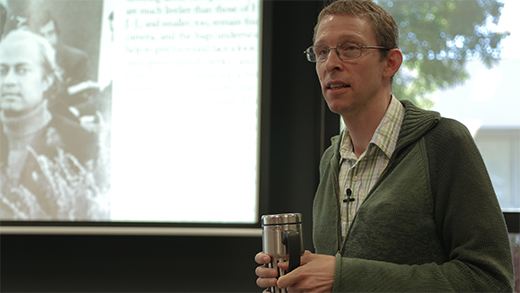 Nerve and Constraint: An Interview with Chris Andrews

To reduce a César Aira book to its plot is a disheartening exercise in futility. The Divorce—Aira’s fifty-second novel, and his tenth translated into English by Chris Andrews—is a single moment spliced into all its potential, present and past. Originally published in 2010, the new translation comes with “a kind of introduction” from Patti Smith, who gives the transformative feeling of reading Aira a name by calling him a “psychedelic geometer.” She isn’t wrong. The Divorce is a cosmic revelation; a study of chance, possibility, memory, and reality, in chain-linked dimensions.

Chris Andrews is a translator, writer, poet, literary critic, and professor of literary translation and comparative literature from Australia. He published the first English translation of Roberto Bolaño’s work in 2003, and received the Valle-Inclán Prize for his translation of Distant Star.

I recently had the honor of speaking with Chris online about his publishing journey with Aira, toggling between different modes of reading, and his process translating The Divorce.

Hi Chris! Thank you so much for taking the time out to speak with me! Where are you writing from, and how are you holding up?

I’m writing from Sydney, and I’m holding up OK. We’ve been lucky here so far: not many cases of COVID-19, and relatively mild restrictions.

You’ve translated a number of works from Spanish, including Roberto Bolaño’s Distant Star, Marcelo Cohen’s Melodrome, and several César Aira novels. I’m curious about your beginnings—what drew you to Spanish-language literature at first?

Reading translations, especially translations of Borges: Labyrinths and the Selected Poems 1923–1967 edited by Norman Thomas di Giovanni were talismanic books for me before I began learning Spanish. Prompting people to learn the source language is one of the important functions of translation.

Congratulations on the release of The Divorce! What has your publishing journey been like with Aira? When did you first encounter his work, and what drew you to it initially?

Thank you! As a journey, it has been full of delights and sinuous rather than straightforward – the books have been so different from each other. It was in 2001 that I started reading Aira. I had a sort of illumination. I was riding a tram in Melbourne on a sunny winter’s day reading a photocopy of An Episode in the Life of a Landscape Painter, and the descriptions of the Andes as seen through the eyes of Rugendas were so sharply vivid and yet so wild in their figuration, I wondered: How can he do that? From then on I was hooked. I became one of the Aira collectors.

I spoke with Charlotte Barslund last year, who translates from Norwegian to English, and she mentioned that “authors are always willing to help—as long as you don’t waste their time.” How would you characterize your relationship with Aira? Since he’s a translator himself, do you typically consult him with a set of questions before starting on a draft?

No, I save my questions for the end, because I don’t know what I will need to ask about until I actually tackle the translation, sentence by sentence. Like Charlotte Barslund, I don’t want to waste an author’s time. A translator into English is usually coming along after translators into several other languages, and asking about a book that was published years ago, many years for some of Aira’s books, like Ema. So I collect my questions and send them in one batch, sometimes two. And Aira replies with grace and often with self-deprecating humor. It is a bit intimidating translating the work of a very experienced translator from my target language, but he turns out not to be a control-freak.

Having translated a significant amount of his work, do you think you can anticipate his thinking, or do you feel familiarized with his techniques at this point?

Not being able to anticipate his thinking is one of the great pleasures of reading and translating Aira. Patterns and regularities do emerge from the work, but Aira twists away from them restlessly. Somewhere he says that every writer wants to be a different sort of writer. I don’t think he has resigned himself to being the writer that he is. He once overheard some people remarking on the absence of sex in his novels, and thought, “I’ll show you,” as he did, in El Santo.

How do you toggle between different modes of reading? Do you read like a translator even when you’re reading for pleasure? Is there a difference between the two?

My naïve, hedonistic mindset is fairly robust, I think. Occasionally I’m reading with a prospector’s eye, wondering if the book might be a candidate for translation, but even then I’m not often wondering “How would I translate this sentence?” Actual translation slows reading way down, and sometimes helps you to notice subtleties of crafting at the sentence level. That happens with Aira: the plotting may be nuts, but each sentence is beautifully formed (at least in the original).

Could you walk us through the different phases of translation? How many drafts do you typically get through before a work feels “done”? Does this vary from project to project?

There are seven numbered drafts in my folder for The Divorce, but the number of drafts varies according to the length of the book. There are more with shorter books, because less time passes between passes, so I seem to have fewer fresh ideas with each draft, and need to repeat the process a few more times. And the process does vary greatly from project to project. When I was translating Marcelo Cohen’s Melodrome, the first draft was slow, because he uses so many invented words and I had to come up with analogs in English, or “Deltinglish”: the translated version of “Deltingo,” the language spoken by the inhabitants of his Panoramic Delta.

In terms of the process itself, do you approach the work line by line? Or, do you find yourself working in fragments? The Divorce swerves in quite a few unexpected directions, so I’m especially curious about where you chose to begin with this translation.

I do go line by line, from the first to the last. But you’re right about the swerves. Sometimes an Aira novel has just one: The Proof, for instance, with its gobsmacking leap from meandering conversation to super-violent action. In The Divorce, you get three (at least), between the sections neatly identified by Patti Smith as FIRE, EVOLUTION CLUB, MANUAL and ICE. But the plot keeps swerving back to the central moment: a minor accident, a pile-up of coincidences, and a metamorphosis.

Do you often fall down rabbit holes in search for the right translation of a reference? What does that task look like in real-time? How do you know when a line is working, or not working?

The territory is riddled with rabbit holes of varying depths. Sometimes there’s a gap in my linguistic or encyclopedic knowledge and I have to do some research: trawling the internet, quizzing informants, visiting a library. Often, when I’ve gathered the requisite information, and the meaning is clear, a satisfying solution remains beyond reach. Then it’s a matter of keeping the pertinent elements in mind and in motion until they can come together in a new way that seems to work. This phase of the process is compatible with routine tasks such as hanging out washing or uprooting onion weed. I like getting stuck and taking the problem for a little walk around the house or garden until I happen on a solution that is more economical or rhythmically pleasing: perhaps not definitive but definitely better.

How long did you spend working on The Divorce?

The dates in my folder tell me that it was about a year all up, but see below.

I’m sure this has been said before of your work, but I never feel like I’m reading a translation. When working with strong voices like Bolaño and Aira, how do you manage to preserve their style, their particular flavor?

A strong voice is often one that defends its own particularity in translation. Self-commentary is always perilous, so I might just say that translators have to strike a balance between the nerve required to make it sound real and the restraint that stops them talking over the voice with their own tics and preferences.

In addition to being a prolific translator, you’re also a literary critic and a professor of literary translation and comparative literature—how do you separate time for each of these roles in your life?

I get anxious if I’m not making some progress on a translation, however slow, so I tend to translate in quite short sessions, broken up by other obligations. My days are pretty messy, but I wonder whose aren’t. I do like to translate early in the day, if I can, and not after teaching, unless I really have to.

What are you working on at the moment?

Fulgentius, by César Aira: the story of a Roman general who accepts a mission to pacify the province of Pannonia as a pretext for staging productions of a tragedy that he wrote as an adolescent.

Lastly, what are some of your favorite works in translation?

The Divorce is now available from New Directions. Order your copy here.