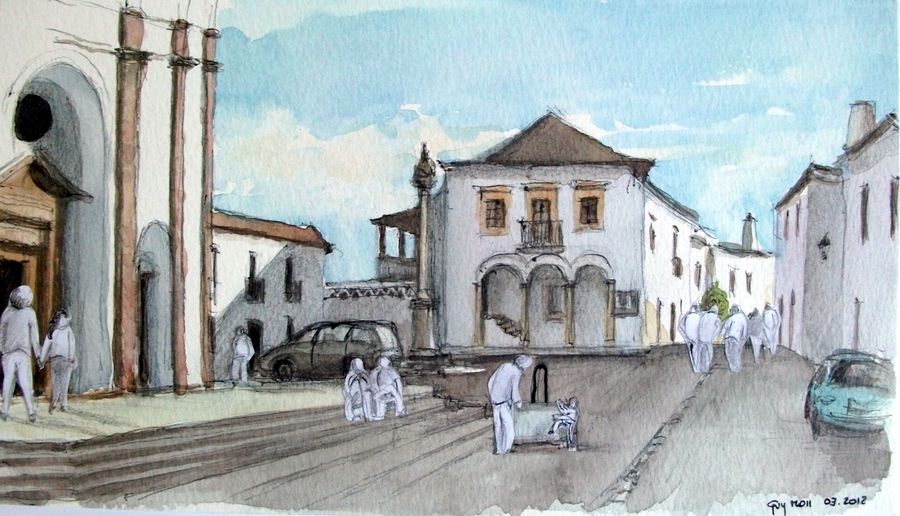 Clara shows up on the porch, arms crossed. I heard the teapot whistle inside and know she wants us to go in. My boy was lying on the grass with his fingers interlaced behind his head; the butterfly net recklessly discarded at his feet. We tried to catch butterflies, but gave up and started searching for shapes in the clouds.

“What are my boys doing,” Clara asks.

“Mommy, we awe wooking fo’ aminoes in da kie,” he replies. He looks like a fat person doing a sit up when he attempts to get to a sitting position.

“We’ll be in, in a minute,” I say. Jeffrey runs over to me, and I sit him on my lap. We look up at the sky again, and he points to a cloud. He says it looks like a stork. “I don’t know, Jeffy; it looks more like an egret to me.”

“It’s a white bird with long legs.” I’m always trying new words with him. I want to build his vocabulary.

“Wook Daddy,” he says in amazement. “Da paychip it pwaying ‘umting.” I follow his gaze and notice a plane flying low with an odd looking contrail following it. I chuckle and tell him, “that’s a plane, Jeffy, not a spaceship. And that thing behind it is not spray; it’s a contrail.”

“What dat?” he asks. I think hard, trying to come up with a way to explain to a three-year-old the science involved in making a contrail. I settle for an example riddled with errors.

“You know how the teapot gets hot, and steam starts coming out of it.” He looks puzzled. “You know; the cloudy stuff that comes out.” He nods this time. “Well, that stuff is just water in a different form. When a plane flies through the air, it makes water transform. It’s called con-den-sa-tion. The water makes the clouds you see in the sky, kind of like the teapot makes steam.” He stares at me blankly, scratching his arms and neck.

“What’s wrong buddy? Are you itchy?” I feel my own arms start to itch, and then I remember we were lying down on the grass. “It’s ok, bud. It’s just the grass that’s making us itchy.”

Clara yells at us from inside the house, telling us to go inside immediately. Jeffrey is scratching all over now and I can feel my skin start to tingle. A hysterical Clara reemerges on the porch screaming about chemicals and war, but I can’t hear the whole message because an intense ringing starts in my ears.

Carlos resides in the Pacific Northwest. He writes flash fiction for a living. . . Then wakes up and goes to work at his 9-5. You can find him on Twitter @goldzco21 or honing his skills in weekly flash-fiction competitions. He drank the #Flashdog Kool-Aid and now runs with that pack. Follow them @flashdogs.